Ways of organizing a lot of cards

For an intranet application we've developed a way for users to create dashboards.

Each dashboard is named and then displayed as a card. In the beginning this was very easy to work with. Now we have users with over 30 dashboards and they're struggling to find the one they're looking for.

These are the options we've discovered ourselves:

Do you happen to know other resources I can review that discuss additional options? Do you know of any other?

[Update]
A little more context and a picture;
A dashboard in our system is basically a canvas where users can add charting widgets focused on visualizing date. They can name these dashboards and also share them between other users for collaboration. The system itself can be compared to an IOT asset management solution. So it's not uncommon to have several dashboards for a single asset while maintaining multiple assets. A dashboard can be about multiple assets as well. 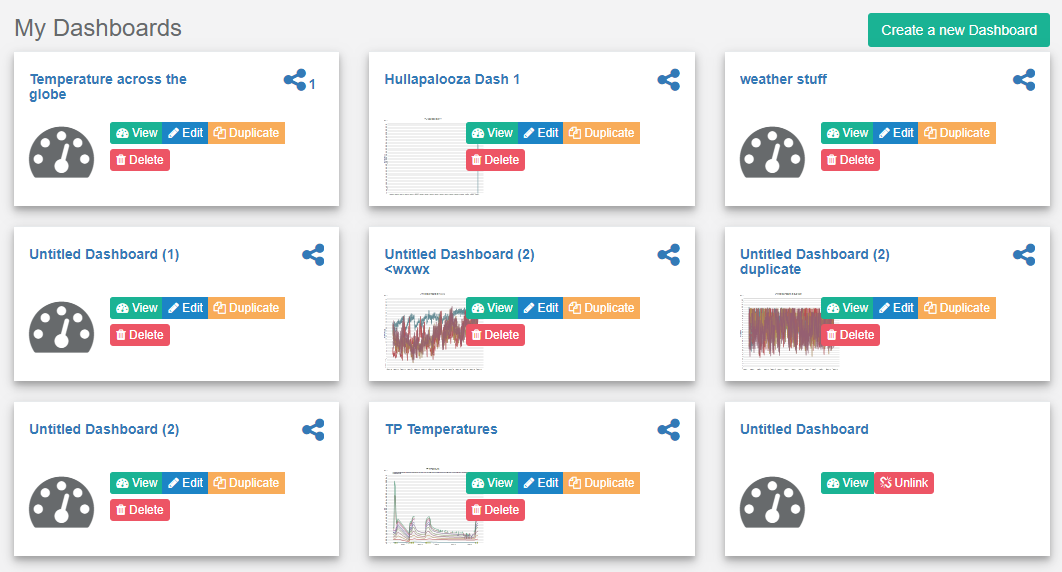 Can we see an image of what it looks like?

As always prototype and test.

Allow users to create folders in which they organize everything themselves

This sounds like a step in the right direction. However, limit the amount of folders, else you could find yourself in the same position.

You'll run into the same issue that you're in now, unless you limit the number of favorites and the users know how many they can favorite

Again, limit the amount that you can tag.

EDIT: I've seen the photo and still stick to what I've said. In the end it comes down to testing. I can give you my opinion on what I'd like, but I'm not your user. If you can't test, then I'd probably go with allowing users to create collections(folders), but instead of just having the user create all of them add some pre-made folders. Hope this helps!

USE CASE: The user needs to be able to find one dashboard out of many.

There's more than one way of accomplishing this - and they can be combined.

The simple way would be to list the dashboards and have the user sort them by name, date (and hopefully data groups).

You can also use a carousel view and allow the user to thumb through his dashboards.

15
Difference between Tiles and Cards?
0
Organizing content using tabs and sidebar
3
How to make cards distinguishable without using colour
0
Actions position on cards
5
Cards with margins VS Edge to Edge container
1
Make Cards more clickable
1
Using cards as navigation to other cards
2
What are good principles for organizing files?