Ahoy! We've built an emotion tracking tool based on the emotion wheel; a tool that helps people articulate how they're feeling by identifying their core emotion and finding the emotions that directly relate to it. Here's a pic of the emotion wheel: 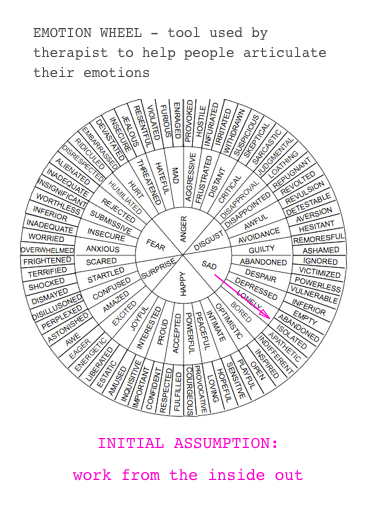 The goal of this feature was to

The first version lets users identify which of the core 6 emotions they're feeling, rate how intently they're feeling and then identify the words on the outside of the wheel that helps them articulate how they're feeling. It looks like this:

WHAT IS MAKING THIS TOUGH

The biggest issue with flipping the order of these screens is that users would be presented with a very big list of emotions to choose from up front. It is important that they can find the words that best describe their emotions and I'd like them to be able to do this with as little drilling in/drilling out as possible. Options I've considered to help this out: - breaking the lists into groups (e.g. color) to make them easier to browse - shortening the list initially and using 'more' + 'less' buttons - horizontal scrolling swim lanes of words

I realise that the reason for presenting all the secondary emotions in one list is to show the user what emotions are available in the system. However, presenting this much data at once can feel a bit overwhelming (as you point out).

A less overwhelming solution may present the user with a single autocomplete-like text box that asks "How are you feeling?", that loosely matches1 the list of all your emotions. Now if the term the user puts into the box does not exist, you can do two things:

The idea here is that the choice to see all emotions is a conscious one, and by the virtue of the message "do you want to see our big list?", the user will probably be more prepared, cognitively, to see this.

Interesting concept. I really like the sliders that allows the user to specify intensity!

1 For instance, if the user types in "stressed", you can show emotions that are usually associated with stress (overwhelmed, sad, tired - I am just guessing here). You can also use other users' inputs to make this lookup smarter.

Not the answer you're looking for? Browse other questions tagged mobile multi-selection emotion or ask your own question.

2
Mobile. Long list to scroll, vs. collapsible trees
5
Display Complex List Details to the User
2
selecting multiple items from a short list, and marking one of them as "leader"
3
Mobile UI for choosing without replacement a item from list b for every item in list and then choosing between two options
4
What is the best interface for multi selecting from a list?
4
How to present a multi-facet 5-star rating system?
7
Does Material Design have a guideline for styling a "select all" checkbox?
0
multi select list menu with 'Other' option
2
Handling long text in width-constrained layouts
5
Multi-select box vs Dual list box