Is a low priority higher or lower than no priority?

Let's say you can assign priority to a list of items where the priority can be either of: 'High', 'Medium', 'Low' and no priority set

Would you consider 'low' priority higher or lower than no priority?

Edit: To give a bit more context, suppose you have a list of jobs that you have to do and by default, the jobs are created with no priority, sometimes weeks/months in advance. The priority is assigned by a person doing the scheduling closer to the job's due date such that people know which jobs are more important to complete within a given day.

I like the way Windows does their process priority. All processes by default are Normal priority (so it's not possible to have "no" priority), and then the priorities are relative to that. 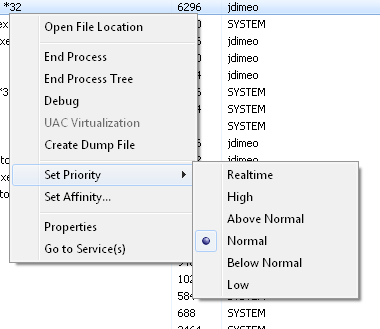 If you have a system where items with "no priority" are new items that have not yet been reviewed and assigned a priority, then these should probably show at the top. If we don't know the priority, it could be a high priority. You don't want users to miss these.

An example might be new admissions in a hospital A&E who have not yet been triaged. Showing a non-triaged patient as below the lowest priority in the list could be fatal.

I think this depends on how you are implementing the priority system.

Say for example, the purpose of your priority system is to allow information to be displayed or acted on in a specific order (for whatever purpose), then you could argue that things that are given priority will appear in a specific order, whereas items with no priority can be sorted and presented in any other way.

However, if the purpose of your priority system is for ranking of an entire collection of item and you want this to be displayed in a list, then you will still need to assign some value to the items with no priority so that they can be displayed along with all the item others in a comparable way.

In other words, you can either have a two level system:

Or a single level system:

And this will affect how you need to display and design the interface to suit each of those specific purpose/use case.

tldr; Low Priority is higher than No Priority.

Imagine an entropic system where there is no defined order and no one thing has no precedence over another - this is the natural chaotic state. Humans (and I guess their computers) are somewhat inclined to try and make order out of this chaos. For about 500 years priority was a mass noun - a singular word implying that within a chaotic (indeterminate and unordered) system, then one thing (or one set of things) might be marked as having priority. That still leaves everything else indeterminate. These days we tend to make lists - generally ordered lists - even within the set of priorities (now plural). If something is more important (whatever important means in context) than another then it gets moved up the list.

If we start to use bucketed prioritization (discrete levels) instead of a list, we wonder about the determinate nature of items within the same bucket. Do they still have an order in the bucket? Are they done in parallel? Do all things in a higher priority bucket get done before those in a lower priority bucket? Will dependencies still work?

And... where do things go that I still don't care about being prioritized? This latter group is the remainder of all items after things have been prioritized. Following this thinking, it seems that any kind of prioritization must (by definition) be that which prioritizes a thing above the remainder. Therefore whether a thing has a high, medium or low priority means it still has 'a priority' over the things which have no assigned priority.

Thus Low Priority is higher than No Priority.

If a job doesn’t have a priority, then it’s an unknown, and therefore should be avoided in any good UX pattern. Because of its unknown state, it could be higher than low priority, lower than low priority or even higher than high priority. You don’t know, a user don’t know, nobody knows. A bit on Franchesca’s answer, depending on the case it could be fatal, or cause issues that could (and should) be avoided easily.

Think about this: your users DO KNOW the priority, so allowing “no priority “ as a choice would mean a step back in knowledge they already have. Specially when you mention a job could be created weeks or even months before. It’s very easy to see that you can apply an algorithm like

where DD is Due Date, ETC is Estimated Time of Completion and PR is an inverted Priority Range (the higher the PR, the lowest the priority). And this would be an automated task with no user intervention.

Of course the algorithm above is an extreme simplification, but the important thing is: priorities based on dates are dynamic by definition, what now is low priority tomorrow could be high priority. But the priority is always there, no matter if low or high, it does exist. Thus, “no priority” makes no sense and it could be higher, lower or in another dimension

Not the answer you're looking for? Browse other questions tagged usability user-expectation or ask your own question.

7
Form design and placement of action buttons
21
How to define/classify messages and notifications in web applications
34
Why are normal water coolers so low?
1
Increase zooming scale at higher scales?
3
Price too low to show!
5
Better way to show Priority Level in drop down
2
How would you assign groups and/or individuals to an item?
1
Set priority iteration
2
Contact form fields priority