Should Checkboxes be Checked or Unchecked by default in forms

I have a quiz creation form, in which an admin is required to fill the quiz name, details, number of maximum attempts and similar admin level configuration items.
The admin should configure if the quiz can be reattempted even if the a candidate had passed in the previous attempt. So I used a checkbox here. The confusion is; is there any standard rule for default state of checkboxes in forms?

The image shows the 2 possible options that I could have in the form.

Please advice which is the correct representation, with respect to any documented standards.

Successful pre-selections can make interface more efficient and pleasurable to use. Sane default selections can reduce the amount of actions a user needs to perform.

Whether or not a checkbox should be preselected should be based on the domain context and business rules. Business rules will dictate whether something should be opt-in or opt-out. Preselect according to the principles of least annoyance. A user should spend as little time as possible opting out of things that they don't want.

However, I think the core of your problem is not about pre-selection but rather how a checkbox should be labelled.

The label for a checkbox should be affirmative because checkboxes are used to enable an action or state. Checked should represent yes (do the action/enable the state) with unchecked representing no.

If a checkbox label forces the user to decipher a double negative you've made a mistake. Users prefer yes do this rather than yes, don't do that. For example [ ] Subscribe is clearer than [x] Don't subscribe and much clearer than [ ] I don't want to receive updates.

Aim for brevity in your labels, the label should convey the action in the most concise way possible. The shorter and clearer your labels are the less time the user must spend reading and interpreting them.

The interface allows the admin to

I would label your checkbox with a variation of [x] allow repeat after passed attempt. The label is clear, if you check the box repeats are available to students that have passed. Your business rules will state whether it's more common to allow students to try again after a successful attempt.

How I would do it

I would have a [x] allow reattempts check box that enables a slider/stepper/text-box control to set the number of repeats and the checkbox to enable repeats after a pass.

That depends on the context.

A checkbox that makes the user accept terms of agreement for example should be unchecked since its a critical decision which needs the users interaction to be legally okay.

I'd like to suggest a 3rd solution which avoids the need for figuring out an appropriate default value altogether.

In this case, I would actually not use a checkbox, because you can have multiple values here and not really a clear default value. In addition, you can technically have 3 options here, and a checkbox isn't adequate in that scenario:

I would personally use a dropdown, or a list of radio buttons: 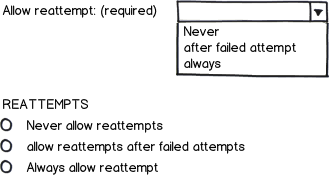 Pre-selected defaults in checkboxes officially make it easier for people who cannot or don't want to spend time on filling out forms and checking boxes, but it goes without saying that this can easily be abused to force certain options on unwitting users.

So while it will force users to devote some attention to these annoying technicalities, it might in the end be in the better interests of users to make them check those checkboxes first.

Not the answer you're looking for? Browse other questions tagged usability forms checkboxes standards or ask your own question.

1
Is it possible to create a different experience for both internal and end users viewing the same information?
4
Checked checkboxes vs. unchecked checkboxes
3
How to design a form with more than 30 mandatory field inputs
0
Checked and disabled checkboxes for non-changing setup
0
Most User-Friendly way to show password-protection options
1
Two 'directions' in form
1
Accessibility Guidelines for saving changes to boolean controls in a web app
0
Checkbox while applying Filters