I have a form and in the form, there is a field called ID - this field is a unique indicator and is never editable.

If I'm using Material Design principles to design my form, how am I supposed to show this to the user?

Looking at the MDC-Web's recommendations for Text fields, it looks like the only thing I can do is disable the field.

So according to their examples, my Id field should look something like below. 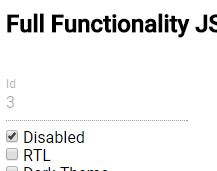 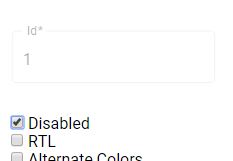 For me, these make it look like Id is something I might be able to edit, but for whatever reason it's been disabled. It doesn't seem appropriate for something like an ID field which is basically intended as information for the user only.

According to Material Design principles and preferably using the MDC-web framework, how should I display these fields?

If it's a field that will always be disabled, why display it as a form field at all? Why not just display it as content, a header, or just plain-text at the top?

In my projects I create span elements that resemble input elements in terms of styling and just use those. So, just copy/paste height, border, etc values in a new class and use that on the span.

Another solution would be to add readonly and disabled attributes on the input.

It depends on the kind of the form and the result of the form. Probably, the 'correct' answer depends on multiple factors, but most importantly on the type of form you are rendering and for what purpose.

For example, if the form is rendered as an edit screen, it is highly likely that the input should be visible to give an indication that this was actually an input value. Showing it in any other way, might lead to the mistaken conclusion that the ID was generated. That is why the input should either be a disabled, readonly input field as I have mentioned before or use an element that resembles an input.

In the exact opposite case - aka where the ID was actually generated, I would use something other than input as suggested by other users, most like would use it as a header - given that in most cases the ID would be considered to be the key field in a form.

it should not be a form element and it sounds like the state of the system.

Keep forms fit for purpose: editable data. Keep state of system as content around the form.