How to represent site language and article language without confusing the user?

I want to make a website that offers content in different languages (fairly common). On top of this most articles (books) are written in one or at most two languages. The user that is browsing the site in language X can see articles that are written in any language, but he should also be able to filter out those languages that he's not interested in.

Any tips on how to make this separation between site language and article language (specially the filtering part) clear to the user and not confuse him? The filtering is done on a global scale. So once the user selects "Only French+English articles" the whole site only displays those articles no matter if you're examining search results, categories etc. Therefore this global selection has to be visible and "updatable". Also the site language should always be visible.

Do you know of any examples where this has been done before?

If this is a major feature, and not just a minor nicety, I would offer controls in the header or navigation area, and not more hidden in the profile.

However, for the articles, you might want to let users select more than one language. For example, I might want to view articles in English AND German. Therefore, use a label of "Set article languages" next to a set of check boxes indicating the available languages.

Langauge for the site should be treated as global switch, probably in the hear near the perspons name (assuming logged in system).

Defining country documents languages should be a multi select filter displayed when filterable content is listed. The multi-select option requires that all selected filters are displayed so that is it clear (without interacting) which filters are currently applied. My favoured approach is a filter 'bar' with multi select dropdown on one side - when items are selected in this dropdown they appear next to the dropdown in the bar with a clear 'x' remove icon. Selected items in the dropdown apear selected, and should be possible to deselect from dropdown also. Eg: http://yfrog.com/nv9la6j

While I don't know of any examples of sites doing this, I can suggest a way of handling this.

From your description both settings are global, and so you could include them in your acount / profile settings. The difficult part would be letting users know that this option is there. To deal with that, I would probably ask them to choose when setting up their account, and let them know at the same time that they can change it at any time in the future in their account settings.

I came across this on Apple's site which seems like a good example. 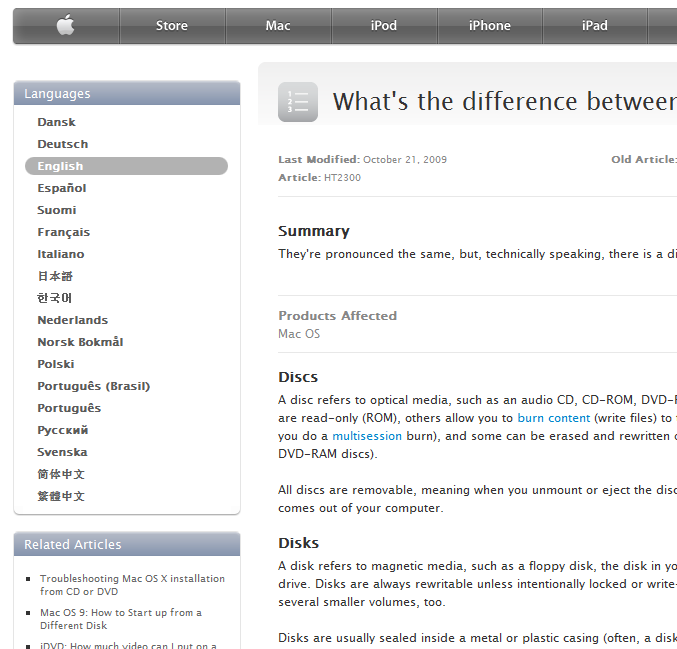 I am not aware of any site working exactly the way you describe. I know a few sites that have to deal with large amounts of content in multiple languages (e.g. europa.eu, admin.ch) but usually there is no distinction between language of the content and language of the interface.

For example, on the EU website, if something is not available in your language, you will see something like this and be able to choose to read it in another language but if you do follow the link, the whole interface will be in the same language than the document. The "advanced search" function does allow you to specify which languages to search.

Worldcat is another example that is somewhat relevant. You can switch the language at the bottom of each page (this choice is session-specific, not part of the URL) and choose to search documents in another language but that's a traditional catalogue site, so many users probably already understand the distinction between the site and the documents indexed.

All these sites have some particularities that might not be relevant to your situation (i.e. large overlap between the different languages for the EU website, clear distinction between site/catalogue and indexed object for WorldCat) but you might still want to check them out.

Not the answer you're looking for? Browse other questions tagged website-design language or ask your own question.

6
Mixing languages on a blog : cute or worst idea ever?
3
Redirection on language change
3
Mirror top navigation order between left to right-languages and right to left-languages?
7
Country/Region Specific locales: How much is it important?
14
UX principles for multilanguage websites?
2
Handling language transition mid user journey
4
Countries vs. Languages - changes in phases
4
What are best practices for providing change language options on multilingual site
2
Language and country selector on a website