If I start editing one table cell without saving changes to another cell, should it apply my unsaved changes?

I have some table and adding row. You can add elements to the table by typing something and clicking on Add.

Every data item can be edited. Now i want to add something and i type in input "Ite" (look picture below), than i remember i have to edit "Item 2", so i click Edit on Item 2.

In this case is it better for UX to delete input (Ite) or just leave it?

If i edit Item 2 and click OK or check, than i can go back to finish my input. Or is it better when i edit other element, text in input is deleted. I think it is better to leave text in input. 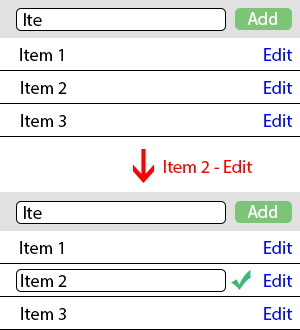 The essence, as I see it, is: if the user is part-way through editing (including adding) one entry, and attempts to edit (or add) another entry, then what should happen to the first entry? I see three options:

There is probably no one "right" answer: some factors that may help you decide:

Overall, "commit" seems to be the most common, probably because it is easy to implement. Most of the time, it is adequate, though there have been frequent situations when I would have liked a "remain editing" / "multi-edit" ability. Whether the extra complexity justifies the freedom will be a case-by-case decision. Discarding a partial add/edit would, in my opinion, nearly always be the wrong thing to do.

1 One example of a dependent edit would be: you are in the process of renaming a file (e.g. NewData) when you realise the target name (e.g. CurrentData) already exists. With the ability to "remain editing" the user can rename the existing file to some other name (perhaps to maintain an archive of old files, e.g. OldData-Jan, OldData-Feb etc.) and then save the changes to the original rename. Without this ability, they would have to cancel the first rename operation, rename the clashing file, then re-rename the original file.
Share
Improve this answer
answered Aug 6 '18 at 7:11

Keep it. You are offering the possibility to edit multiple items at once, so you should do exactly that.

Unless the user tells you to clear input or reset it, don’t. (Consider what an action would be named if you did: Clear-input-and-switch-to-editing-other-item? Should that go on a button?)

There's a scenario that I don't think you've considered here: I'm halfway through writing in the title of the new field I want to create when I remember that I need to edit one of the other fields first. I go and edit the other field then come back to resume creating my new field. - what happens there?

The alternative is to find a new way of adding a field. I've seen a lot of forms that work like this:

this avoids the whole area of having a new field open while editing another.

Whether it'll be visible to the user or not (giving up on new element addition and choosing an item to edit), keeping the information which is entered by user as an input worth to keep.

I don't know if you're aware of the SE environment's question/answer/comment editors but, it really make me feeling good to see what I already typed whenever I open it on another page, media or device.

Not the answer you're looking for? Browse other questions tagged forms input-fields input ux-field or ask your own question.

9
How do I add the ability to cancel editing without a button?
6
Many-to-Many associations - Edit in place or on new screen?
2
About the creation and management of items
3
What is the best way to show the user that their changes have not been saved yet?
2
Allowing the user to add input fields
4
Should I label every row in a table of inputs?
0
Does a select input element (fixed options) need a "clear input" button?
1
Edit a record added on the page
4
UI issue for Add, Edit and Delete experience
0
Is there a name for a text input that lets a user input multiple values?