Is it always necessary to have table column headings?

Is this "lesson logger" UI clear enough to understand without table headings?

I'm trying to improve my user interface for users recording lessons. Previously there was one button that was "schedule lesson" but we quickly found out there were two 'actions' people wanted to take, either scheduling a lesson in the future, or one that had already happened. The lessons were also just in a big list ordered by date.

One problem we had was once a lesson has actually happened the user has to "confirm" it, to make sure all the planned details are correct (edit the times if they overrun, and fill in a report etc).

It wasn't clear to users they had to perform this action, especially when they were creating a lesson that already happened. They had to schedule a lesson, then "confirm" it as two separate actions.

So I've split up the tables of lessons into three distinct sections: 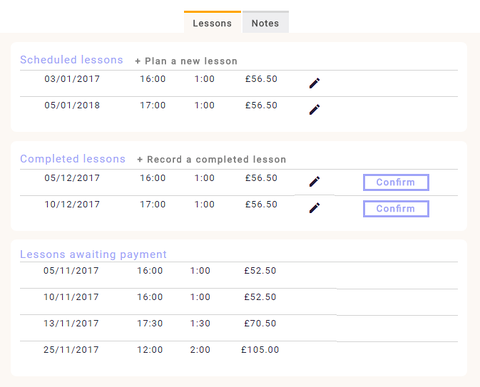 On the face of it this is more complex than the original table, and to keep it clean and simple I have omitted the headings to the table. Is it clear enough that it's the date, time, duration, and price of the lesson without headers? Is there any way I can make it clearer to the user without introducing a confusing amount of clutter to the UX?

Here's a version with headers, left aligned (looks much better). Moved buttons to the right. I might make them more link-like rather than bit square buttons: 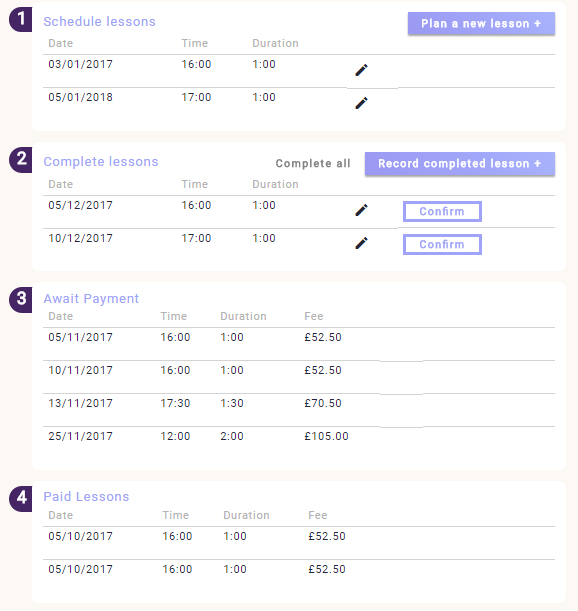 The fee doesn't actually apply to the top two sections, it's not calculated until the lesson is confirmed so there's more space for the edit and confirm buttons. Will be a pain trying to get the cells to line up though!

Experimenting with numbering to try show there's a flow from scheduled lessons through to payed lessons.

Date and price are obvious, but the time entries are ambiguous and open to misinterpretation.

I think you're suffering from a little slip in perspective here. What you really need is an additional row at the top of each table, with no additional styling than some bold text, but in your mind this is somehow equating to "a confusing amount of clutter".

A simple row of clarifying labels is not clutter.

(re: separating link from title)

Not the answer you're looking for? Browse other questions tagged usability tables or ask your own question.

7
exclusive select in a table: radio button, rowclick, text only, text and icon, or icon?
3
What is a good field separator that can coexist with colons?
3
Matrix question type in mobile
4
What is the best model for editing and viewing data that is summarized in a table?
17
Best way to show many user actions for table rows?
4
Represent mandatory/recommended/optional relationships between items
2
Datatable edit delete and new buttons placement
5
How to design a very complex table/search structure so that it caters to both advanced and basic users?
0
"Shopping Cart behaviour" for selecting rows in a table?
3
Different views in table - omit column without relevance?