It is quite common to see websites advertising lists like "The 10 most amazing ___ you never heard of!" 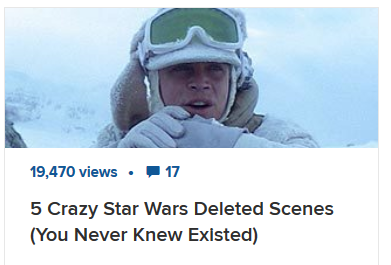 What is common among them, besides the sensationalism, is that they all claim that the readers are ignorant, or outright stupid (especially if the list is about things average educated people should know about)

It's obvious that the titles are formulated this way for clickbait, but does it really increase readership, to put such phrases at the end of every article?

It should be easy to test: you could randomly present visitors a title with such a phrase half the time, and without it the other half, then compare clicks. Were such studies done?

Note: I'm not interested in using such a scheme, I'm just curious whether there is any research behind it.

I think the desire to click on bait like this is two-fold -- first, the user might say "Challenge accepted!" and click to confirm how many things s/he already knew. And second, people are attracted to insider information and being able to impress friends/potential mates with information that only they would have. If you don't know about the deleted scenes in Star Wars, chances are your date doesn't, either.

There are lots of studies around clickbait, and the headlines are heavily tested and optimized. Here's what Buzzfeed does.

Not the answer you're looking for? Browse other questions tagged click or ask your own question.

21
Will users know to click the top item in navigation menu?
2
Which pixel on or near the cursor does the user intend to click?
1
Android app: informing users that an image is clickable