Material design writing style, recommends to be simple and direct.

Here's an example they give:

Here's how I write one-sentence messages:

What is the best way to write two-sentence messages?

The sentence above is just one example. There are many other two-sentence messages in the ui, structured this way:

Problem stated. Explanation of what went wrong or/and what can be done to fix this.

What is the best way to formulate those two sentences?

1) the first one as if it's a one-sentence message. the second one following all the grammar rules and in the right tense form.

2) both sentences should follow all the grammar rules and should be used in the right tense form. (the concern here is that the one-sentence messages would differ. wouldn't that be considered as a different style?)

Generally, the "Problem stated" part of your message should be displayed as a section heading, with explanatory text below in a paragraph. This structure appears in the Material HIG examples:

The terse grammar used for the headings is referred to as "headlinese". It doesn't tend to be used in paragraph text. If you absolutely need to present the two sentences on the same line, you can:

a) make the first sentence look visually distinct so it's clear that it's a headline (e.g. black bold font for the heading, lighter regular font for the body)

That said, the guidelines recommend "being essential", so think about whether you really always need two sentences. 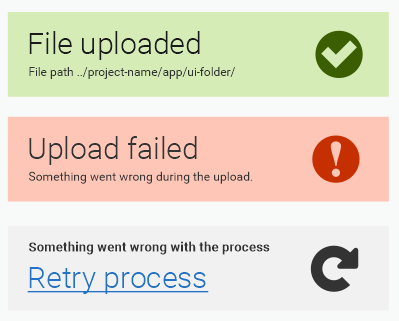 The first thing that comes to my mind is that in the 2 sentence messages you are repeating the message. The download has been interrupted therefore it wasn't downloaded.

Tin man is correct re: the formatting. I think that approach is best.

However, the copy of the message should be in the active voice as much as possible, avoiding "File was not downloaded." I understand when referring to the cause of the error/ issue, companies don't want to take blame (and apologizing may not be part of the company error message tone/ style), but the more active voice the better.

Also, error messages should include some indication of a solve or a way to contact/ message someone for help whenever possible.

Not the answer you're looking for? Browse other questions tagged error-message copywriting popup messages grammar or ask your own question.

8
nice way to display a text message for two dates (range)
42
Periods at the end of a sentence in alert message
3
How can the Copy and Replace message box be improved?
1
Leave data in form after submission?
2
Show file size of (inline) linked downloads?
3
Do fine-grained message statuses (such as when a message was seen) help usability?
4
Enable Button Only to Give an Error? Or Show a Mysterious Disabled Button?
22
How should I indicate that a download is in progress?
10
Should I use error message or warning message for optional field validations?
2
How to structure Error Messages, issue first then solution or vice versa?