Exploring them using Windows Narrator I would say not completely, because the screen reader reads a lot of unnecessary data before going through the table, but I'm new to WCAG and accessibility and I can hardly imagine something distributed by Google not being accessible...

Also, I noticed some charts not being read sometimes, like on this page: https://developers.google.com/chart/interactive/docs/gallery/barchart

This is a very broad question and some aspects will be subjective, so it's difficult to give a complete answer. There are a couple of obvious problems with making charts and graphs accessible, notably the reliance on colour to to provide information and the fact that the data is represented visually.

Google has mitigated the colour coding issue somewhat by including tooltips, which appear when hovering on elements of a chart. In the example below, while it might be difficult for someone with colour blindness to differentiate and cross-reference the segments against the key, they can still hover on each segment to reveal the label and associated numbers. 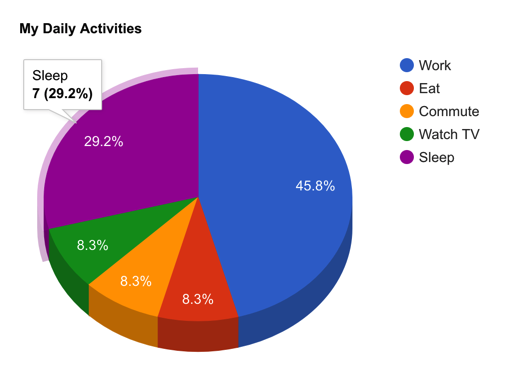 The visual representation of data is still an issue for those using a screen reader or braille display. Fortunately, as the original question mentions, Google does output the same data in tabular format. This is hidden visually and identified by an aria-label element, which is announced by assistive technology:

I haven't tested Google Charts in any great detail, certainly not all of its methods and features, but I expect most accessibility issues have been mitigated directly or by providing an alternative WCAG conforming version of the same content.

Not the answer you're looking for? Browse other questions tagged accessibility charts graphs wcag or ask your own question.

7
How to interpret wcag2.0 guidelines on contrast for buttons and icons
9
Are WAI ARIA attributes required for WCAG 2.0 level AA compliance?
1
Is the cost of creating a separate website for vision or motor impaired users higher than trying to make existing websites accessible?
11
Are modal dialogs WCAG compliant?
3
Creating an accessible, animated, and responsive navigation system
1
Which of these cryptocurrency charts communicates percentage gain or loss in the most clear manner?
10
Maximum contrast ratio for good accessibility
4
WCAG/ADA Compliant Notice
0
WCAG 2.1 Reflow vs Resize Text