I am developing an interactive web map that displays user-generated markers. In terms of adding a new marker, what would be the best way to start the process, especially on mobile?

There are multiple methods that I thought of, mainly:

As I expect a majority of people to use the application on mobile devices and at night, I want to make the interaction as smooth and enjoyable as possible.

This is what the base UI currently looks like: 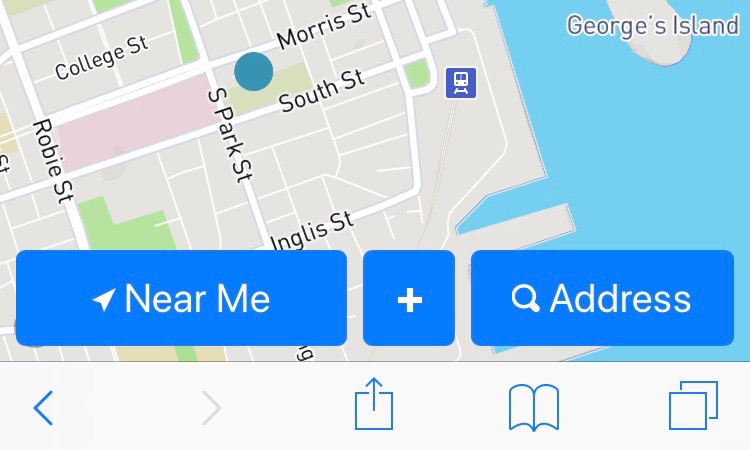 How comfortable it would be to use option number three, depends in what kind of situations your users use the map. For example, if I'm walking around a city, going to bars and stores and want to mark the places so I would remember the place later, I almost certainly wouldn't know the address, and having to check it from the street signs or from the map or asking someone, would be a major inconvenience. It would only work if you know for certain that users will use it only for places which address they already know (for example you did user research and this was the result).

Number two feels the most natural for me, because I can choose the exact spot I want, instead of number 1 where it's not clear where the marker would be. It is also how most of the maps currently work, I think. I would do A/B testing between options 1 and 2 to see which one your users prefer.

If there is no heading that says 'add marker' , and it isn't the main task indicated elsewhere, add the label 'marker' to your + button.

Not the answer you're looking for? Browse other questions tagged usability interaction-design user-expectation maps or ask your own question.

7
Re-plotting items on a map
15
Should you optimize mobile experiences based on individual handedness?
4
How should locations without exact addresses be represented on a city map alongside locations with exact addresses?
1
What is the best action a user expects when adding a marker on Google map
1
What is the best way to present map tools on a map in a mobile application?
2
Ideas on dismissing a popover without a Close element
1
Decluttering forms
2
Drill-down map with touch devices - how to substitute for hover
2
Associating additional content with another page without using a modal
3
Testing Filtering Functionality inside a map based native mobile App