Pattern for navigating by typing text in a text-field

I am working on an application which has a very dense UI with lots of menu items.

Is there a UI Pattern for navigating to different screens by typing text in a text-field? 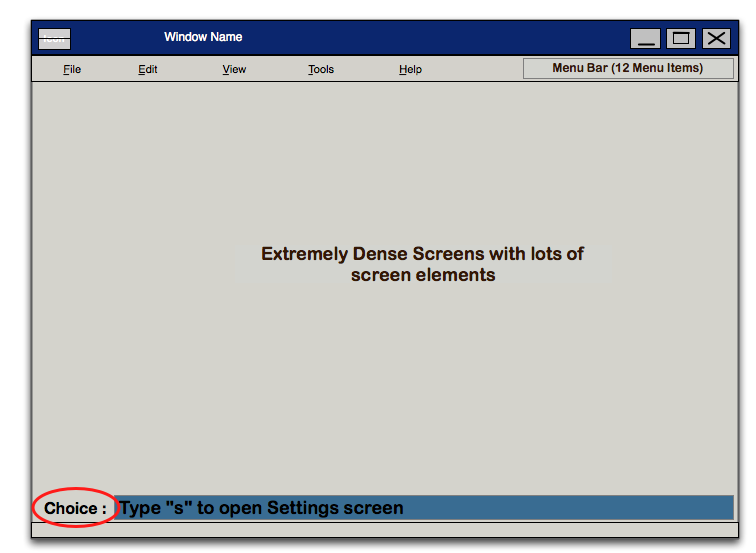 The keyboard focus is on this choice field. The user can type certain commands (usually few letters) to open different modules or even navigate in certain data-sets.

It's not really a UI pattern per se, but Gmail and Google Reader basically standardised this behaviour in web apps, and I've tried to follow it since then:

The "sequence" feature allows you to respond to individual key presses without requiring users to write words, and it (theoretically) gives you unlimited key press combinations since you have a dozen options per key in the sequence. You should be able to implement most commands you want to within this architecture.

I really like how Google implemented this - it's too bad they didn't really extrapolate it into design patterns somewhere (unless they did and I missed it). It would be nice to see more apps follow the trend they set.

I don't know if there's a name for the pattern but there's a great implementation in Mac OS X.

If you go to Help | Search or use shortcut Command+Shift+/ (Command+?). You can start typing the name of a menu item and select that item. 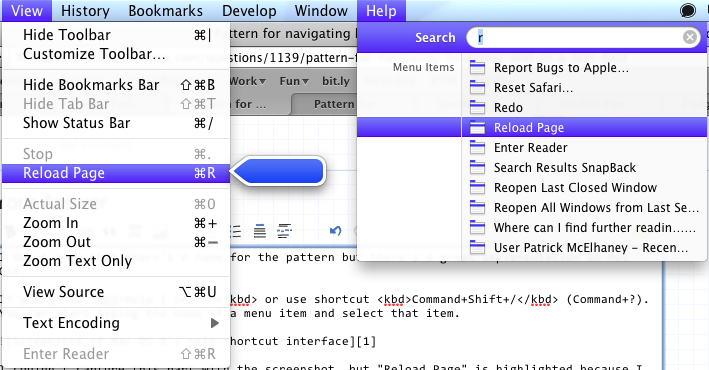 Pressing enter at this point would activate the Reload Page command.

The OS X solution is interesting, and relatively usable until you reach the point where you have to type too many characters to reach a discriminating point (e.g. "Search" vs. "Search in Files")

Also plz let's not call them "chords", despite whatever misguided proposition has been advanced by the warring kings of failed usability (Google, MS, and so many others). Let's call them "sequences". Anybody who plays a musical instrument capable of chords will tell you what an antithetical moniker "chord" is for what we're trying to describe. "Ctrl+Alt+Del" or "Ctrl+B" are chords. "g, i" is a sequence.

TY Dan for the MS video link. can't wait to watch it! If there was a site with videos explaining every other dumb decision they make, I'd probably be on it the rest of my life. Changing the presentation around is one thing, but clear-cutting the mnemonic associations many people have spent the last 20-odd years learning in typical, seemingly arbitrary MS fashion is a productivity killer (and frustration inducer), and I can't wait to hear them try to rationalize it! <--speaking as the "power user" ("powerless", more like) who has to suffer because MS usage metrics show "...99% of users use 'Function A', so let's get rid of functions 'B through D' so we can make all the icons 300% larger." (...also speaking as the proud owner of unopened copies of Office Pro 2007 and 2010.)

Not the answer you're looking for? Browse other questions tagged design-patterns navigation or ask your own question.