An iPad application we are building throws an alert window for various error conditions. We are considering building a custom UI for the alerts since the default alert window is fairly annoying. My question is, how do you stack the alerts? For example if 2 parts of the app throw 2 different alerts, whats the best way to show that 2 things went wrong. One thought is to only show the first error that happened. Another is to show the alerts one after the other, so the user is made to click "ok" twice. Another is something like "2 things went wrong:here is 1 and here is another" but the problem there is error 2 may happen after error 1 but before the user has had an option to dismiss alert 1.

Has anyone seen any good UI pattern for grouping multiple alert messages?

Here is how Apple does it in the Finder Mac OS: 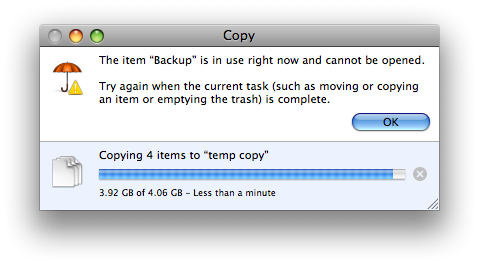 nobody likes alerts (that I know of), but for multiple asynchronous messages, a 'growl' interface thus far feels quite appealing. After reviewing several jQuery specific plugins for 'notification', I found the following pretty useful:

Try clicking the simple demos and watch for javascript notifications along the rightside of your page.

Core consideration here: do you need to interrupt the user?

Does the error need to be shown in a popup or can it be shown in the flow of the app? Eg. is it an exception, or is it a notification? "The page could not be loaded" has a different significance and weight to something like "Retweet failed. Twitter didn't respond."

Thinking about those differences leads to a couple of thoughts:

Sruly posted an answer while I was writing this and it looks very specific and technical. Hopefully my answer can contribute some high level food-for-thought. 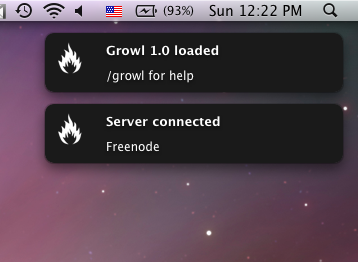 Is able to automatically stack multiple alerts. The alerts can fade out after a second if it's not a severe alert. You can also create alerts that the user must dismiss. Growl is used in a large number of Mac programs, I don't know how popular Howl is.

Although you may not want to use Windows patterns for an Apple product.

A few patterns to consider. (From Windows)

Since I don't know exactly what you are building it is hard to make a suggestion but through a process of elimination I can narrow it down.

Since you have limited screen pixels grouping messages in one box could steal a lot of your screen space.

You probably don't want your application to block unless there is a critical error so JS style alerts are probably out.

I would probably pop up a transparent street sign style alert and leave it in the top right or lower right corner.

Whenever an error occurs, you can display the symbol and then if another error occurs you can flash the alert a brighter color and add a counter next to it with the number of errors they have received. In addition to the symbol and counter, you might want a one or two word label. Something short and to the point would probably be best to save on real estate.

When the user pushes(clicks) the alert, it can pop out a box with their list of errors.

Not the answer you're looking for? Browse other questions tagged popup error-message or ask your own question.

2
Multiple call-to-action popups while flash app loading
2
Usage of Popups
13
Are Mailing list popups bad usability
5
A use case for popups?
1
How to communicate errors on some items to user when performing a bulk operation?
1
Dropdown options that open popups
22
Should mobile modal popups be movable?
1
Feedback for invalid selection of the text
2
Alternatives to cascading modal popups