I am currently working on an iOS app where the user interface should allow them to pick 1 of 2 options. One and only one option must be selected. My boss feels very passionately that this should be in the form of checkboxes.

I have suggested using native iOS objects, such as a segmented control. I even suggested making custom radio buttons as an alternative, but she insists on checkboxes. She says that users are familiar with checkboxes and says the others alternatives are naturally confusing.

From my perspective, using checkboxes for exclusive single selection is like going into a house where the hot and cold water are on the wrong sides of the faucet. In it's very nature, it goes against all standards and norms without reason. However, she argues that there is no research to support my claim, and I simply feel that way because of my background as a software engineer, and as a result of my background I have lost touch with the everyday user. She feels users inherently understand checkboxes, particularly users who are not computer savvy, while all other alternatives are more confusing to non-computer savvy users.

I should note that my background is more rooted in what goes on in the background of apps, and not on the UX side of things, so it's hard for me to back up my opinion. We are a very small start-up, and don't have anyone with a UX background on the team to weigh in on topics like this.

I apologize for bringing up what I feel is a question almost as old as the Internet, but everything I have read about the topic simply says to not do this, to which my boss responds there is no evidence to support this blog, stack exchange post, etc. She feels that designers are simply posting their opinion, but there isn't anything to back up these claims.

Is there any research that I could provide her with to her with to help her understand why I feel checkboxes should not be used to behave like radio buttons?

Perhaps I simply being stubborn and dwelling too much on a minor detail. Should I just create checkboxes that behave like radio buttons since this is what my boss wants me to do? This almost feels like I am doing her and the company a disservice, but maybe this is because I am too wrapped up in my own opinion.

I ever experienced the same thing ! In designing I usually follow a reference from Nielsen Norman Group. They provide standard guidelines based on user experience research. Every time I argue with my boss I show him an article based on research that explain why we should follow the standard guidelines so it wouldn't be subjective. I found an article that might help you to solve your problem.

You can also remind your boss why was it named radio button. :-) 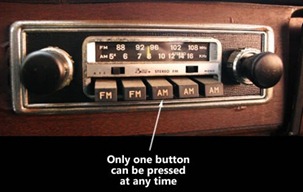 Not the answer you're looking for? Browse other questions tagged mobile mobile-application checkboxes radio-buttons conventions or ask your own question.