How should I position the “Remove player” button?

Note: There will always be at least two players, so the first two players won't have the "Remove player" button.

For the view with three players, it seems to make sense to put the "Remove player" button above the top-right corner of the grid: 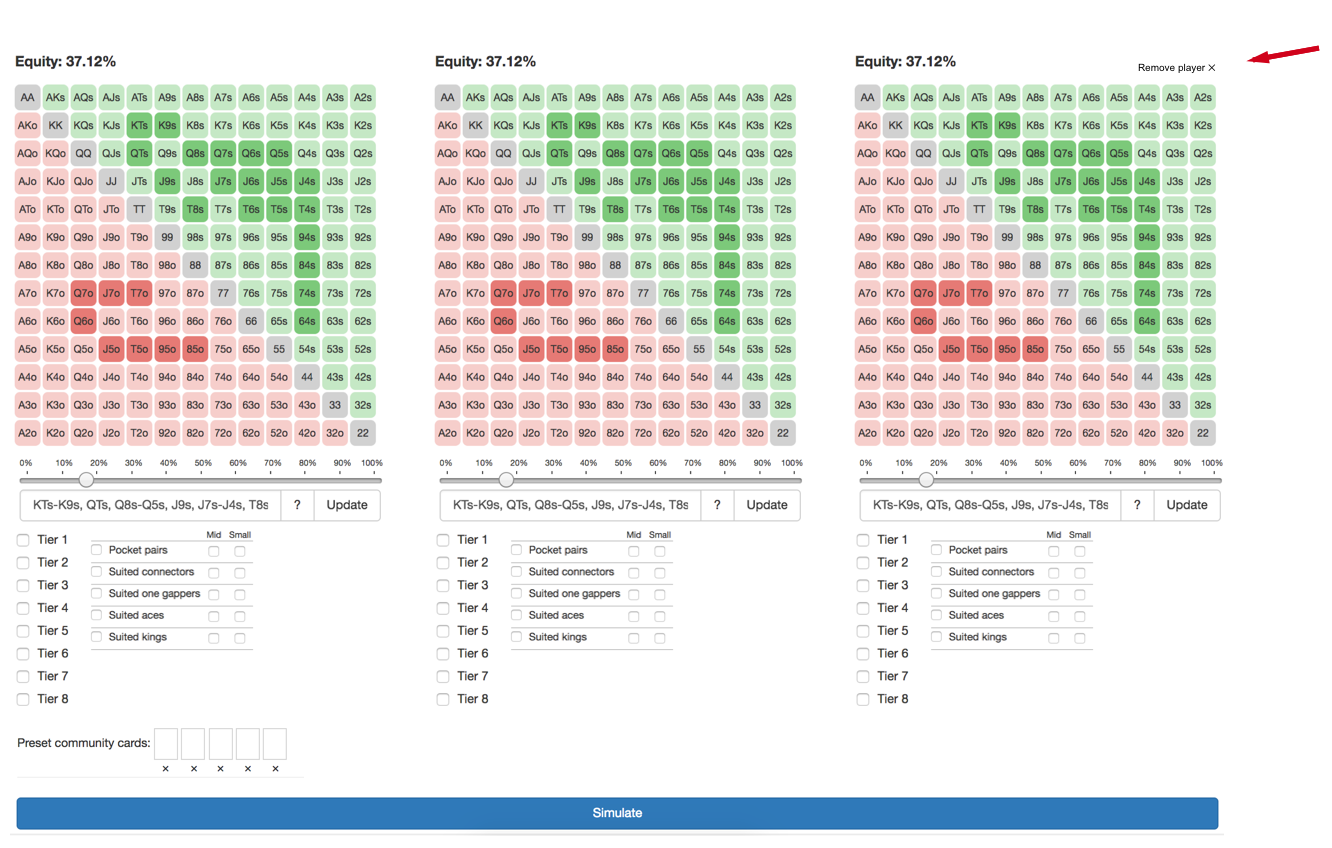 For the view with three players where the screen is more narrow, it also seems to make sense to put the "Remove player" button above the top-right corner of the grid: 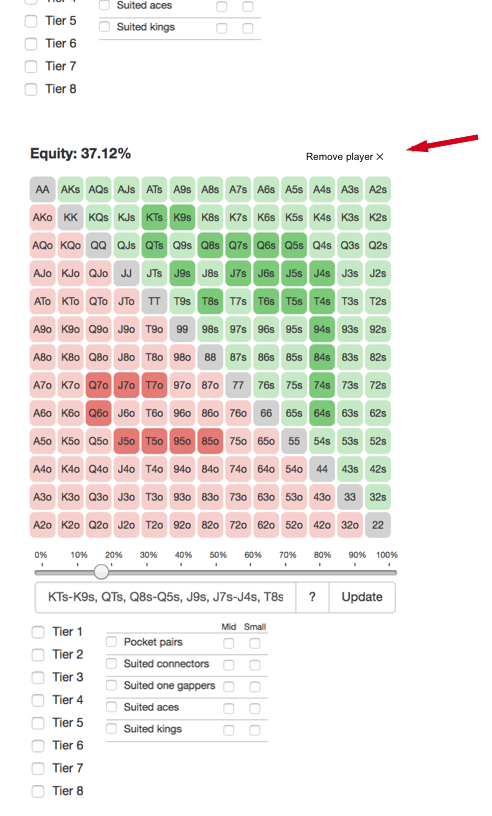 However, on the view with four players and a wide screen, the players are arranged in a grid, and I'm not sure where it'd make sense to place the "Remove player" button.

Having the tier and category selectors to the right of the grid is important because it allows the user to view everything about two players at once, because it's all above the fold for 13+ inch screens. 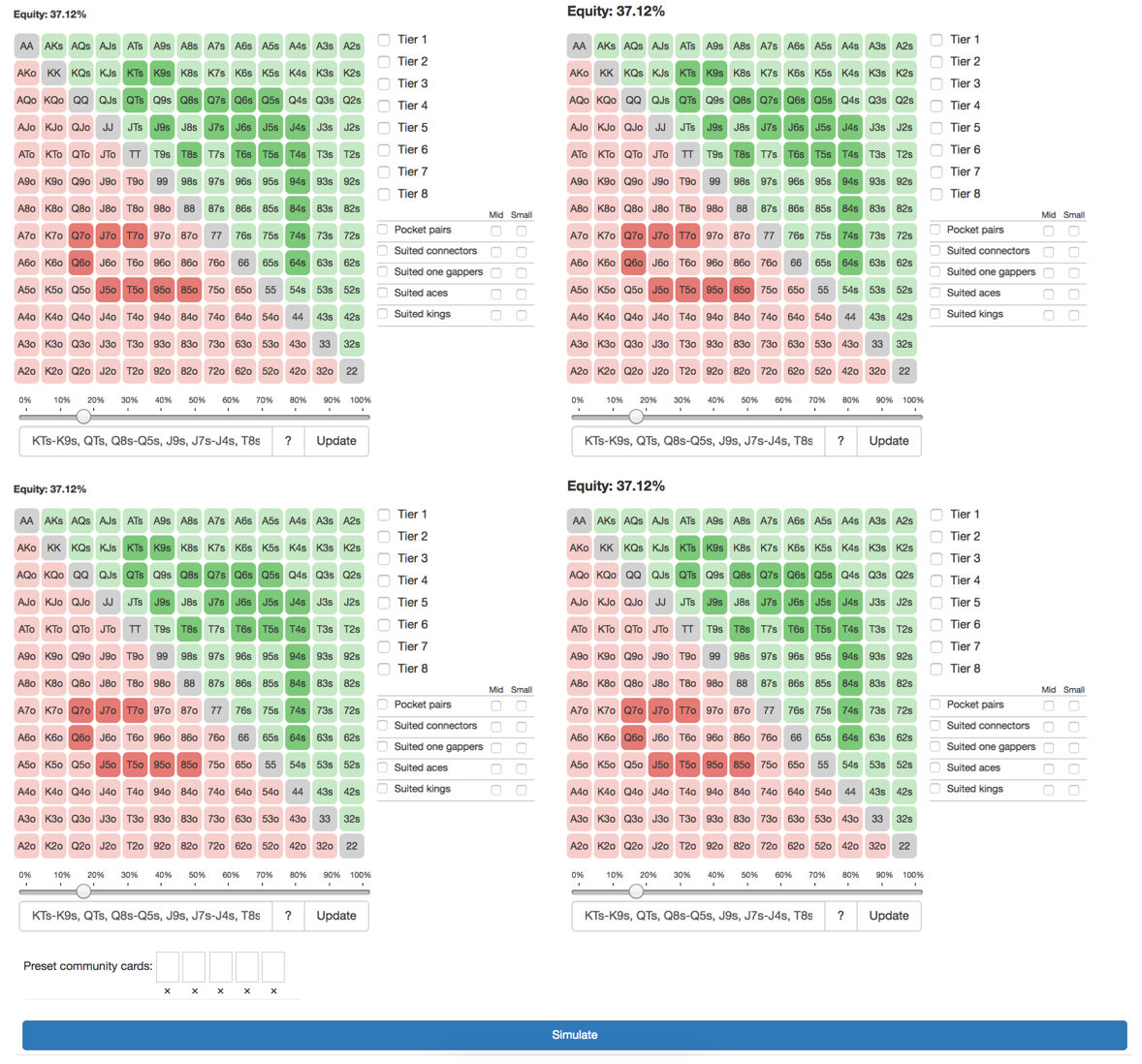 Option 1: At the top-right corner of the "player box". Looks really awkward, but I'm having trouble articulating why. Also, there's the downside of it not being consistent with where it's positioned in the other views. 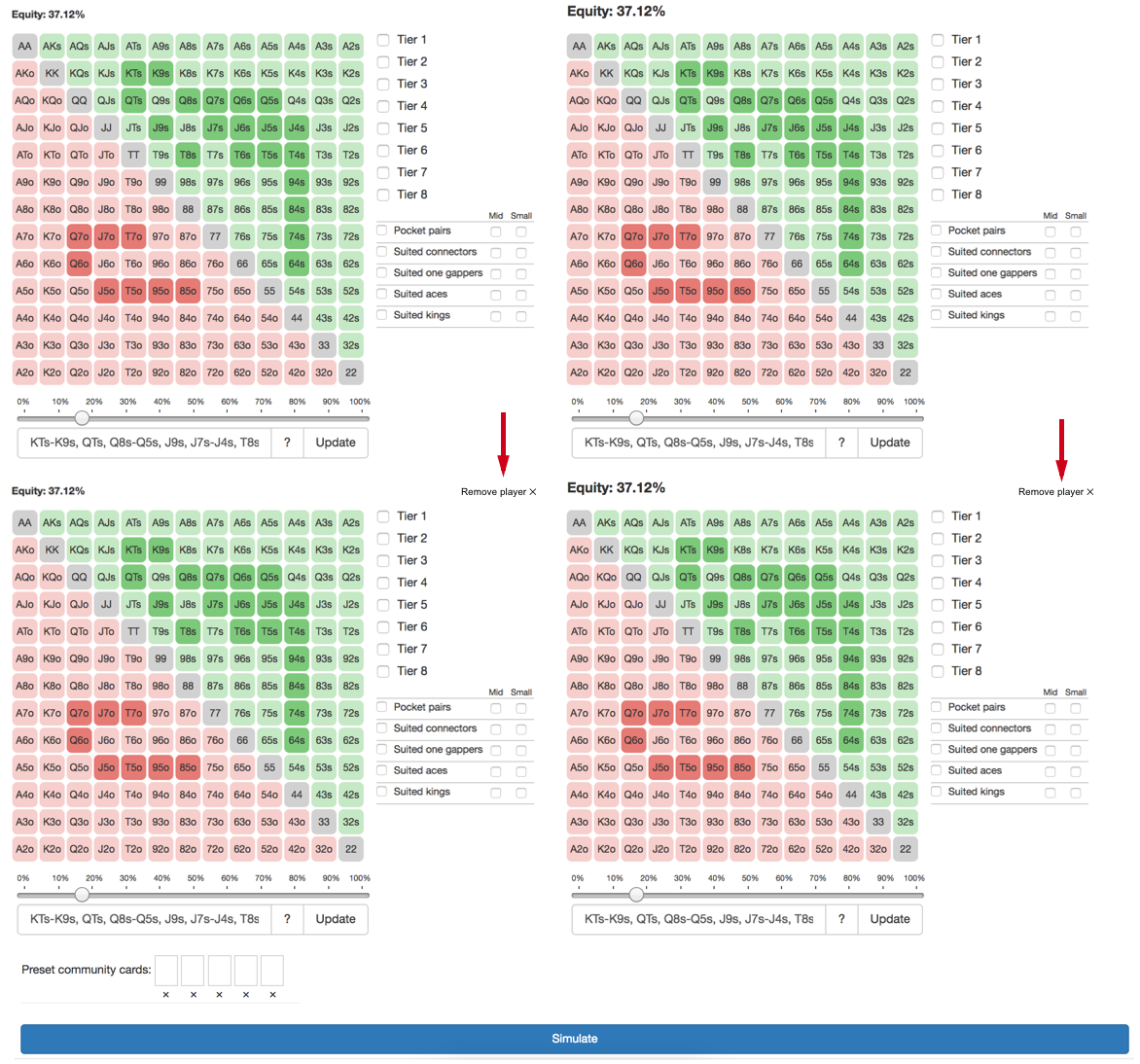 Option 2: Above the top-right corner of the grid (like the other views). Seems decent, but the button doesn't feel like it's associated with the tier and category selectors. Users of the app will probably understand that those components are part of "the player", and thus that they'll also be removed, but it isn't as intuitive as I'd like. 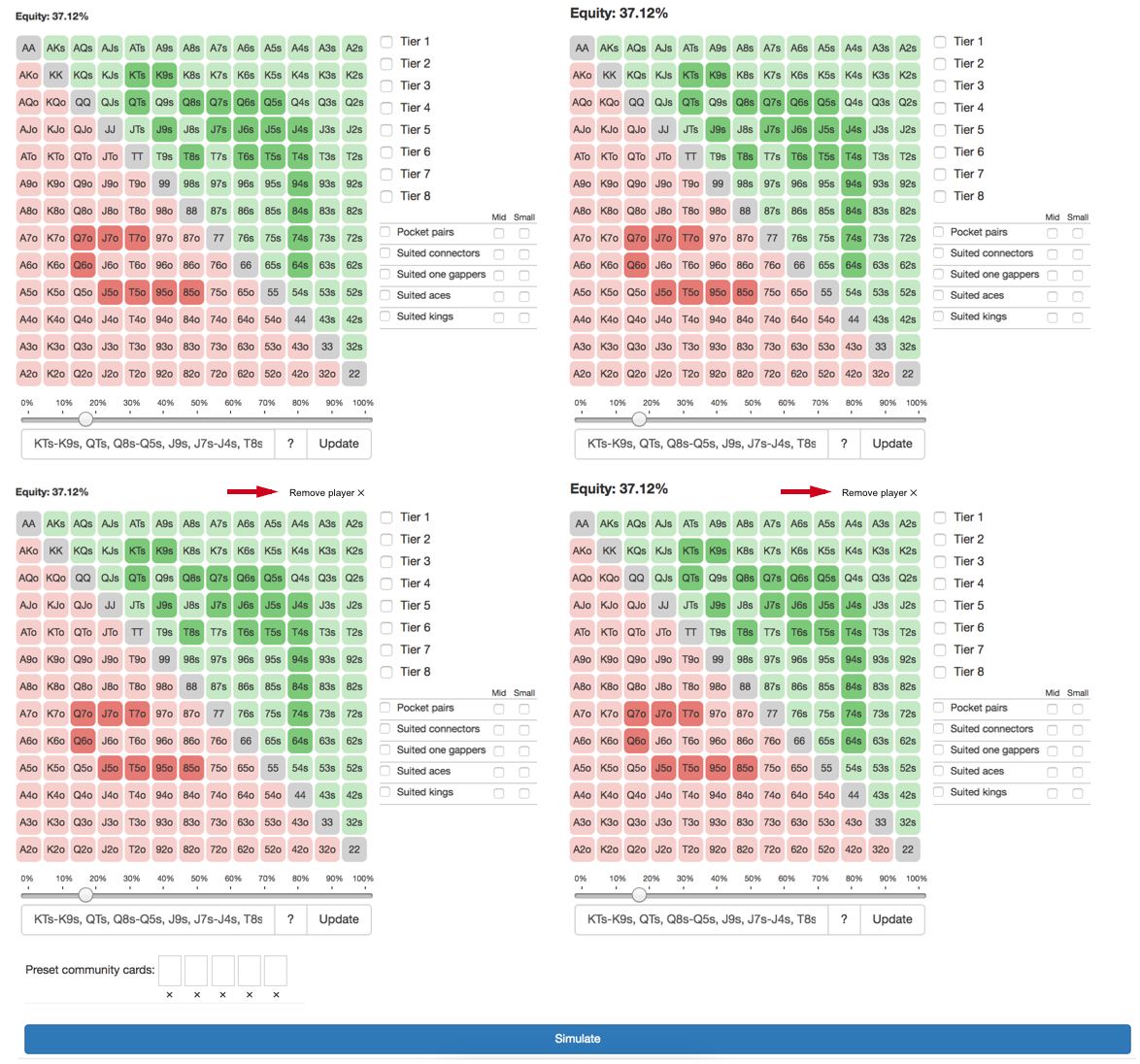 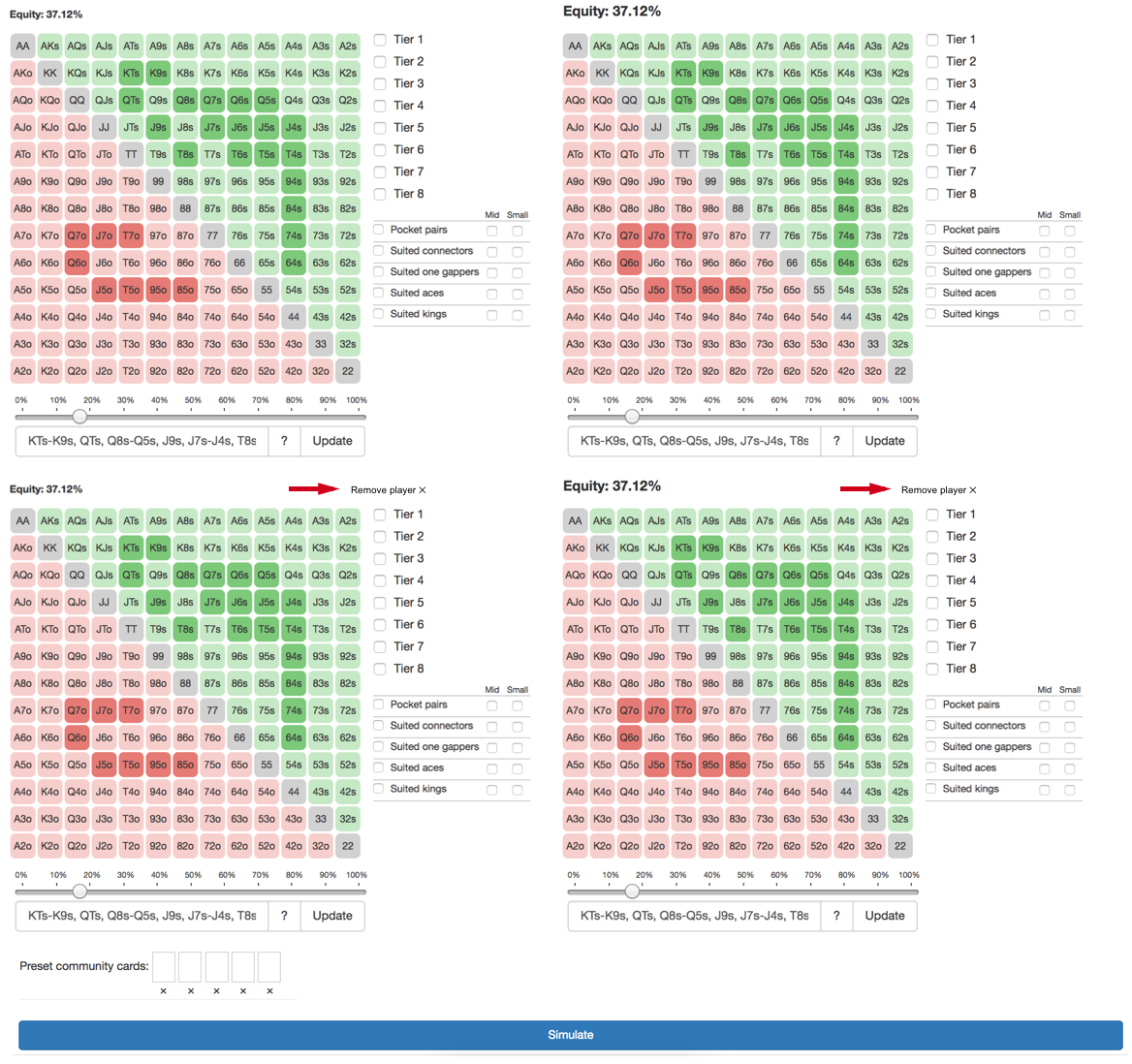 Option 4: To the right of the equity text. It doesn't pop out this way. You have to read the text to realize what it is. When it's positioned alone, I think UI conventions prime the user to expect some sort of remove/close button. 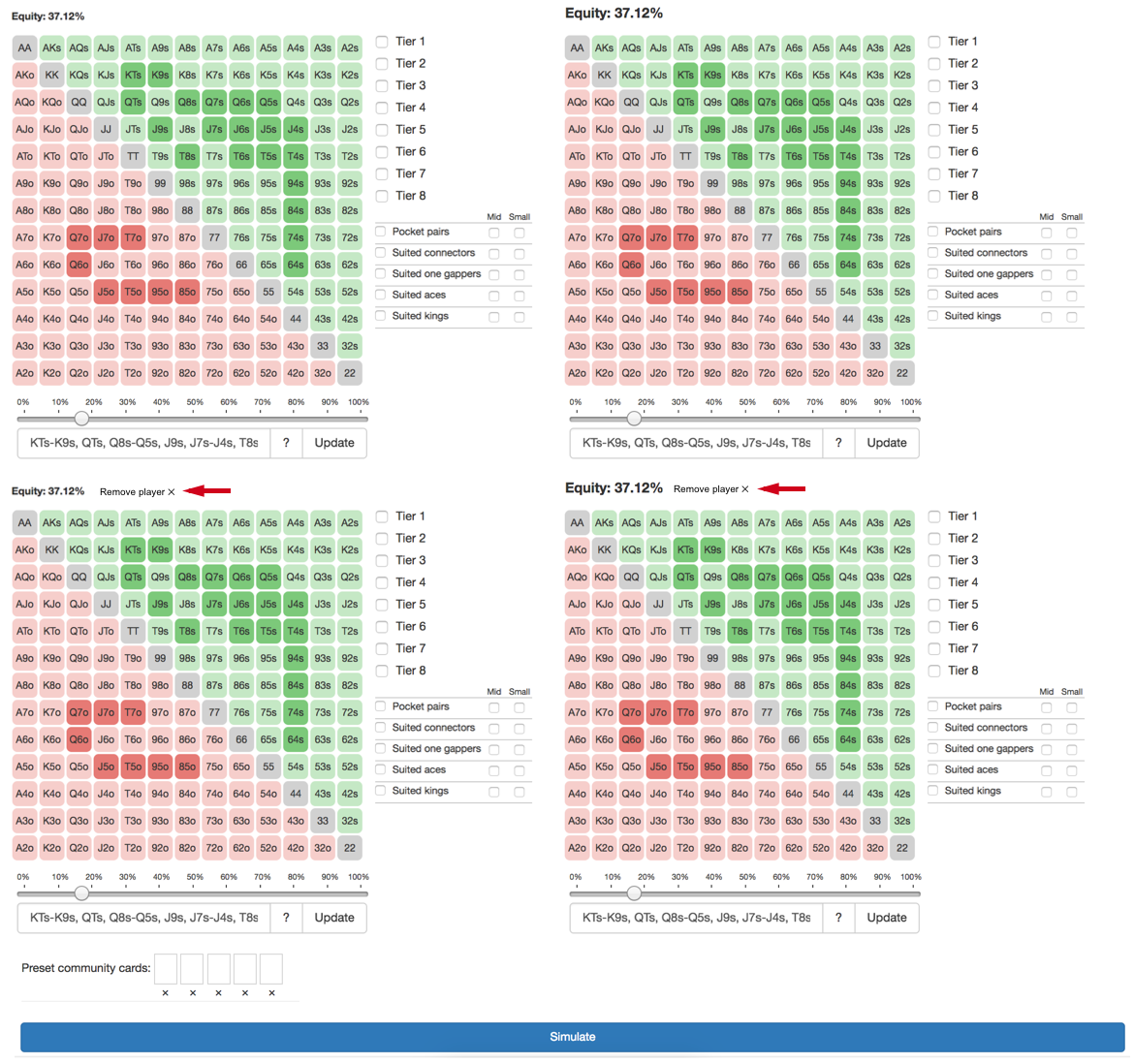 You have a hierarchy and whitespace challenge. Try containing your player elements in some sort of a subtle container. If you solve this, the header and container can work in a responsive manner, as it still visually contains the properties and status of each player as a separate unit.

Your current layout has my eyes seeing the 'Equity' title repeating. If I'm a frequent user, my assumption (correct me if I'm wrong) is that I want to see the Equity Values at a quick glance, then perhaps dive into the scoremap below to analyze.

Right now you have elements that have a lot of pockets with whitespace. You can resolve this by making a subtle container, which separates the individual players, their scores, and the adjustment controls that go with each. 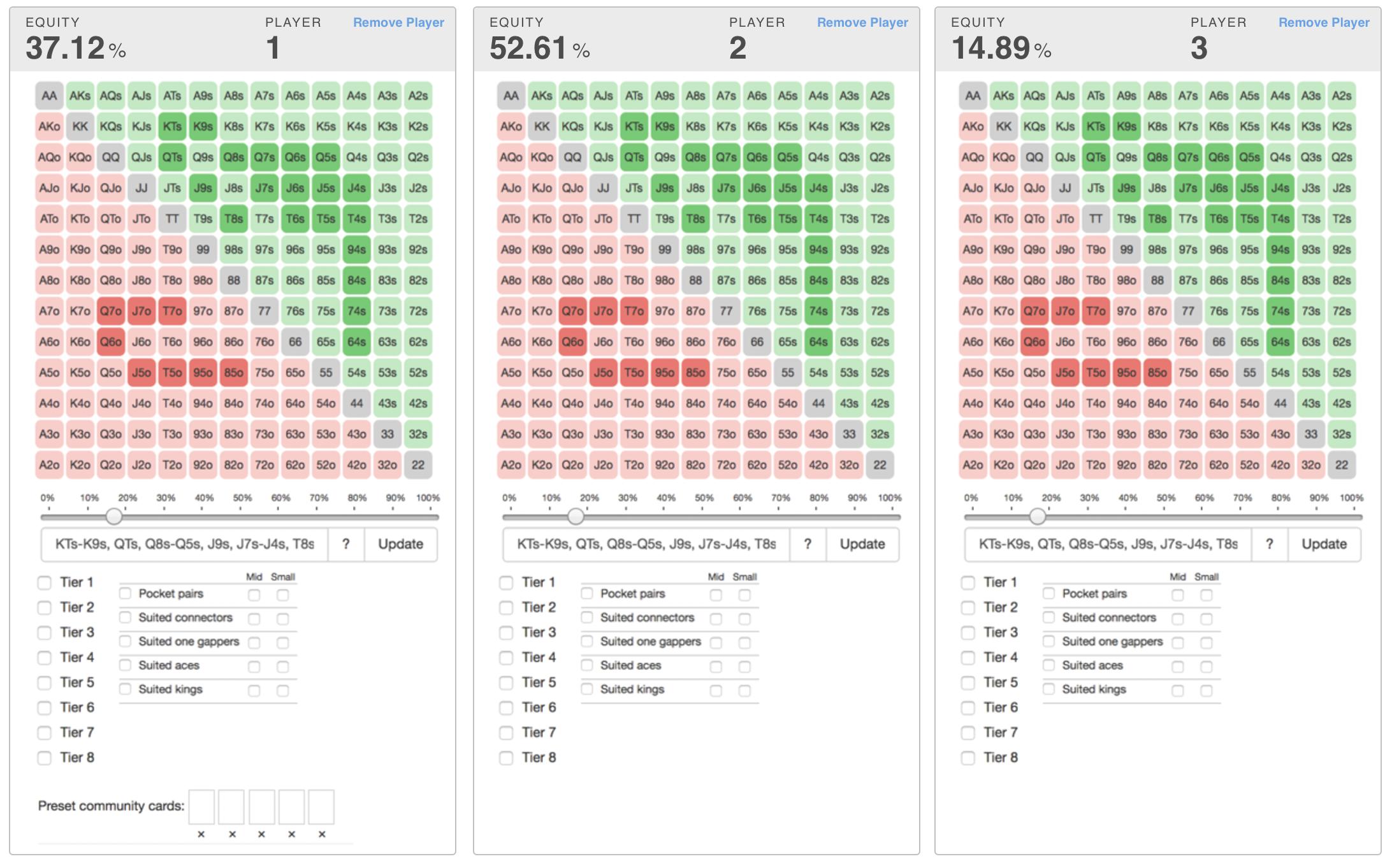 The header stretches, and you still have the players as separate units.

Not the answer you're looking for? Browse other questions tagged website-design buttons position close or ask your own question.

5
Where to place the '< Back' link or button?
7
Why do many/most (Android) phones have the power button opposite the volume buttons?
3
Differing behaviours of the previous song button
1
Where to put a search button with auto-complete suggestions (usually at the top of the screen) to a more suitable location for mobile platforms
4
Best way to switch views inside widget?
4
Best way to provide add/remove functions for a matrix's rows and columns in a smartphone app
4
Columns in a table - settings buttons position
5
In landscape mode on a smartphone, should the positioning of control elements be based on whether the phone points to the right or left?
4
Consistent position of Save button in multiple layouts
0
When you have 3 buttons (one primary and 2 secondary) in a 2x2 grid, where should you leave the space?