Buttons for slow- and fast-playback

I need to allow users to manipulate playback speed for audio; to do so, they can use three buttons:

Tooltips are also used to convey users with meaning of each button. The users can also use keyboard shortcuts for the same effect:

But now, as I'm preparing the app for prime time, I'm looking for a better signage. Here's what I came up with (and why I think it won't work):

Is there any standard imagery associated with such a functionality and that we can use in this particular context?

Here's what I made so far (note the diamond button; I find it more appropriate than the dash, as it shows an up- and a down-button stacked on top of each other and canceling each other's effect):

Couple of options, one inspired by the load calculator question I saw on this site.

Or go with a drag control that increases/decreases speed, up to the limits you mentioned. 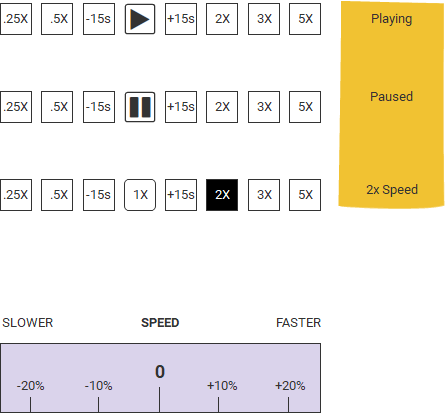 I arrived at this question with the same problem, and after reading Darryl answer I think I will go with an extended approach:

I think it occupies more space than strictly needed, but my previous experience with software that allows multiple playback speeds is that jumping between well-known speeds is more agile than tentatively dragging a slider.

Also, I thought about using different "fast forward" buttons (if regular play is > then there would be >>, >>>, >>>> and so on) but I couldn't figure a good representation for values smaller than one, and I wouldn't like to mix text-labeled icons with symbol-only icons.

Not the answer you're looking for? Browse other questions tagged buttons web-app audio or ask your own question.

4
What are good reasons for and against using audio for feedback?
2
Width For Group Of Buttons
2
Which term seems more appropriate for a playback system, “player” or “device”?
4
Difference in audio level for speaker and headphone?
5
What are your views on having a button that says “Don't click this button”?
2
Form with both save and submit buttons
1
Displaying and editing multivalued attribute?
3
Back function in (mobile) native apps vs. web apps
2
Rules & Behavior for Start & Stop Buttons
2
Long Label Buttons and Action