What is an effective pattern to allow users to compare two or more data tables with multiple (i.e 4) columns in each table?

For example, we have a table with 4 rows and 4 columns for geographic revenue across last 4 years for a company ABC, now I want to add another company to compare (or possibly multiple companies).

In this case, how do we show this second table to compare values with the original table?

It's easy when we have only one row or column but in this case, we have more than one rows and columns. Any example would be helpful!

May I suggest you consider side by side display, with visual indicators of difference?

If you can elaborate what's important (change/discrepancies, seeing whether values are higher or lower, etc.), that would be helpful, but if I was to implement something based on the limited information provided, I would consider displaying the two tables side by side (assuming this is possible, example indicates four columns which isn't too much data overhead). The first table would be the "reference", whereas the second table's cells would be marked to indicate differences from the first (perhaps colored red for lower values and green for higher?) like so:

You may like to pair this with an easy method to swap companies, as well as some sort of primitive 'query builder' to allow users to only select columns that matter so as not to overwhelm them with information.

If using colors, you could also adjust the saturation of the cell coloration to correspond with how great the difference in value is.

This idea may or may not be appropriate depending on how your data is structured. If you choose this idea, you may need to adjust your colors to suit the visually impaired.

Based on Andrew Martin's comment regarding the visually impaired, you could consider a similar implementation of this idea, such as using small arrow icons in the cells to indicate differences instead of color. Furthermore, as per his comment, these "difference indicators" may require a sentence clarifying their meaning, may convey unintended meaning to those unfamiliar with the interface, and may not be appropriate for every column/row.

Some data fun from Edward Tufte: the cancer death rates. 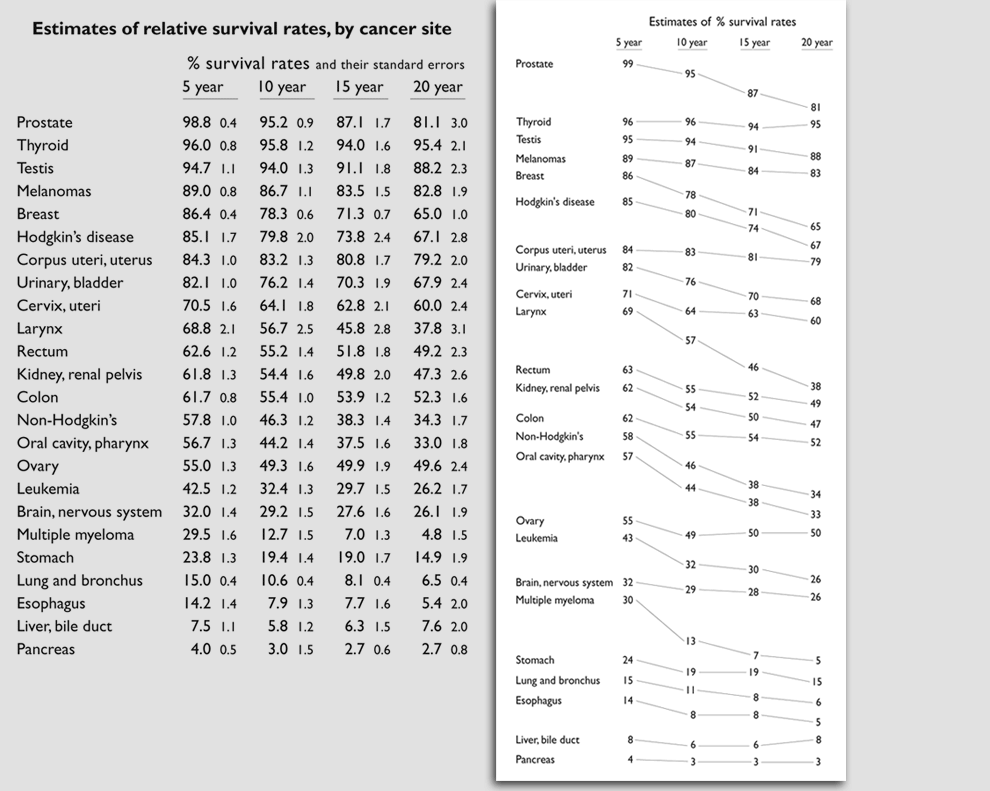 What can we see from here?

How can we apply it to our example? Literally:

European revenue in billions of dollars of a fictional company. The company's CEO successfully used this data visualization to prove he's worth his business jet.

In our case, the graphs are even more illustrative. While Tufte's patients are all dying, our regions can both emerge and fall. And we'll see it instantly.

Can the data be merged into one table and presented like this? This saves the user from having to jump back and forth between two tables, and might be easier to use on smaller viewports.

Not the answer you're looking for? Browse other questions tagged tables data comparison or ask your own question.

1
Data tables - what's column should be first?
1
Summarising grouped data in a data table
1
Data Display of Tables: Table Cells with Must-See Values
10
How do you keep your data tables simple?
5
Large off-screen tables with actions
7
Subgrids - Tables within tables
2
How to show relationship between columns of 2 tables
1
Combined Tables View
1
Input data in data tables