How do I display the whole chat thread title when the title view is specifically designed to be one-line?

Here's the screenshot of a list of all chats: 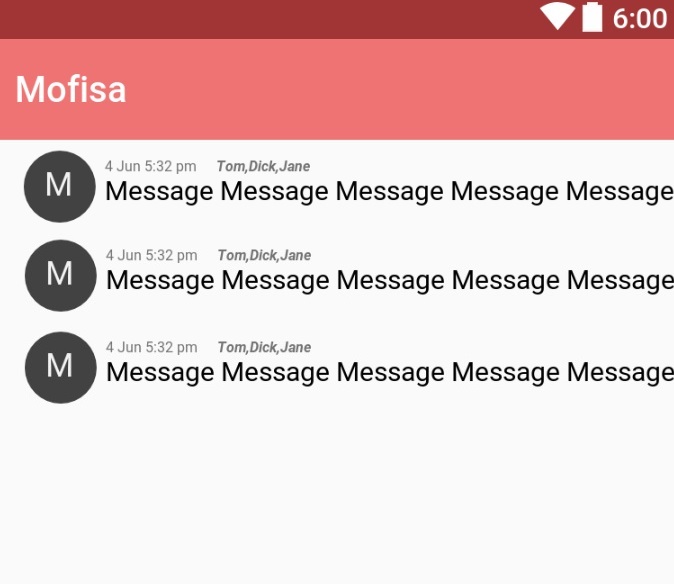 The title of the chat, i.e. Message Message......, is designed to be single line display only. However, users can enter have titles that are longer than the 60-70 characters a line can have on mobile. I need to show the entire title somehow.

Here are the problems:

How do I show the entire title when the user wants to see it? What is the expected behavior?

I think you need to think sensibly about the title length, if truncating is undesirable. On a mobile device you're going to be limited by space. I'm a little unclear how one line can be between 60-70 characters, yet two lines is only 92, that said, I don't think it is unreasonable to limit the title length as the title should be an indication of the topic, not the topic itself.

So your options, as far as I can see are:

Any other idea would be an interaction to view the entire title, which seems a little pointless when a user could just open the subject.

I would suggest keeping **Title** within a certain standard of length and display your title in two lines.

It shouldn’t be what is needed but what works best for your app and users because mobile devices show a different amount of characters, and the character count will also differ for different devices.

So, keep it less and limit your users by providing fixed number of characters.

You can make the long-press action pull double duty. Don't look at it as a single action, look at it like a detail view. You can use many lines of text there for a title, or better; a title plus description. Then under that you have options to delete/unsub, fave, add to a collection, and similar actions.

Not the answer you're looking for? Browse other questions tagged usability mobile android or ask your own question.

2
How to display unfilled fields in a view mode?
7
What to display in mobile app web view when the URL won't load
1
Nested titles for grouping inline editable ordered lists
3
Do fine-grained message statuses (such as when a message was seen) help usability?
1
In Mobile: What's the best way to display photos, in a scrollable list view or in a view pager?
4
Looking for solution to separate two app settings
0
How do I tell the user to fill the whole mobile screen?
3
How to display and modify one-to-one relationships
1
How to display partial view on Details page
1
Mobile - how to reconcile view title and action button title?