I have a table which can contain more than 15 columns, it is not likely that users will see the 15 columns at the same time, but I need to give them the option to select which columns they want to see. I added a section in the table to allow the user to choose from the "Available columns" and move them to the "Selected columns" that will be displayed:

But the client didn't like it, because he is looking for something more interactive and intuitive. Can you recommend me other controls that I can use? Note! The table is like an excel table, user can expand, filter and sort by column. I was thinking of using something similar to excel to hide the columns, but I couldn't find out how to make the "show" columns.

Consider placing table controls in close proximity from the data the user is viewing.

In the example above, you're using a list builder. You say this is similar to an Excel table: do you have any CRUD actions on table rows, or filter controls above the table?

Visible table controls means the user doesn't have to go into a 'mode' to bring up the list builder, and they can see the results of their actions in context.

If you think users may adjust columns to view on a fairly frequent basis you might use a column control above the table, similar to this example:

Here's another version in action (I would probably make it more discoverable with a label):

Tablesaw project from the filament group

Mailchimp allows you to change the column order as well: 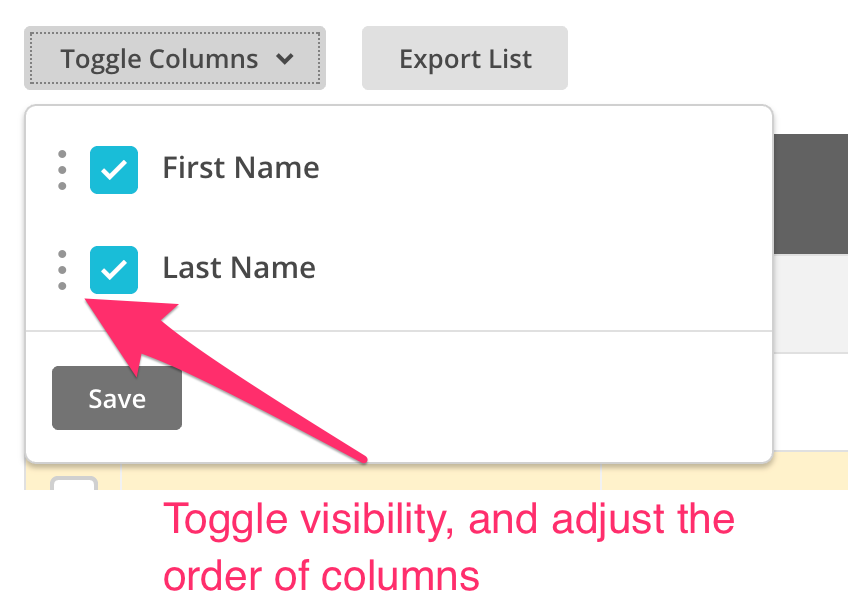 There could be 2 cases (that come to mind) why users want to control table columns (I'm not sure which situation you have):

The first example works with the checkbox controls.

The second also works, but I imagine you might consider some responsive table patterns (I'm assuming you have), allowing for horizontal scrolling or mobile stacked row patterns.

It's from 2012, but a decent roundup of responsive table options, plus the link above.

Not the answer you're looking for? Browse other questions tagged tables data-tables or ask your own question.

4
How best to order columns in a table?
9
Should searching a table include hidden columns?
3
Show Linked entries on Data Table
7
How to handle filtering on table columns?
1
How do I indicate that a column in a data table has been added or changed?
2
How to show important items at the top in an ordered data table
3
Need input on where to display an Add User section in relation to a Users table
0
Tree-structured filter and related table columns
0
Best practices for handling a lot of information in a single cell in a data table