Not right to design same UI for both Android and iOS. But what is the number of users having both Android AND iOS?

Discussions for having same UI for both Android and iOS has been ongoing since ages and the majority of people think that design for platform is better than using same UI across different platform (See here, here, and here. Correct me if my understand is wrong or if the current trend has changed).

However the idea that different platforms having different guidelines and user behaviours doesn't convince the organization that I am working in, as having a consistent UI seems important for them.

Is there some statistics to prove that majority of the people only have devices from one platform (and it might take a huge majority number to convince the organization)
If this statistic is not 'convincing', is there other numbers to prove that users do not like UI that seems to be taken from other platforms?

Alternatively, is there other supporting evidence that is not subjective to show that designing for the platform is the way to go?

< 20% of users regularly use iOS and Android

StrategyAnalytics performed a study on this: 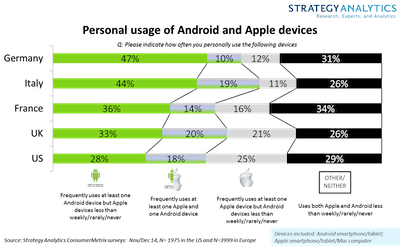 They found that only between 10% and 20% of users regularly use both iOS and Android.

But even users who are familiar with both platforms could have problems with a unified design.

Users instinctively expect something to work in a particular way when using an OS. When it doesn't, it's jarring, and breaks their flow.

There's a great analogy for this in Google's "Design from iOS to Android (And Back Again)" guidelines:

Designing and developing between platforms is a lot like traveling through different countries. You go through the same motions—sleeping, eating, sightseeing, regardless of where you are—but the customs of the country you're visiting dictate how you go about doing them. In some countries, it’s ok to push people into the train, or eat a burger with a knife and fork.

Similarly, if you developed your product first for iOS, you shouldn’t simply expect that you can port it into Android without issue, because your app will feel lost in translation.

Triple Double described the merits of making the Depop app platform-specific in a case study:

Along with a cohesive and consistent visual appearance across both the iOS and Android apps, the visual and user experience updates to the Android app meant that within 5 weeks the overall app rating went from a 3.6 to a 4.2 in the Google Play Store.

Here's some useful guides documenting the differences between iOS and Android, and how to manage these differences:

Not the answer you're looking for? Browse other questions tagged mobile android design-patterns ios or ask your own question.

32
Should Android and iPhone UI be different?
14
Should I be more worried about creating a consistent UI among platforms or creating native experiences?
4
when designing an app for both Android and iPhone, should the user interface be the same?

7
Do I need to design four different apps for Android, iOS, smartphones, or have one common design?
4
when designing an app for both Android and iPhone, should the user interface be the same?
0
Has anyone ever seen a presentation/article comparing native mobile navigation/UI elements?
0
IOS and Android Login Design Question?
0
What are the "official" logos to use when designing an Android and iOS App?
1
I am designing screens for both android and IOS, what to do for OS specific interaction?
0
Designing for IOS and Android
1
Screen size to design for Android and iOS React Native App?