Circular navigation on a mobile app

I am developing a whisky app. As you can see in the schema below, the app navigation contains circular loops. During navigation the user can swipe for the sidemenu to go directly back to timeline, top100 etc.

Here and there I read that circular navigation in apps is considered bad practise. If so, I don't see how I can reorganise this navigation without giving up the flexibility for the user to explore whiskies from the brand, distillery and user pages.

The app starts with the timeline view (marked yellow). The side-menu items are in the grey rectangle. 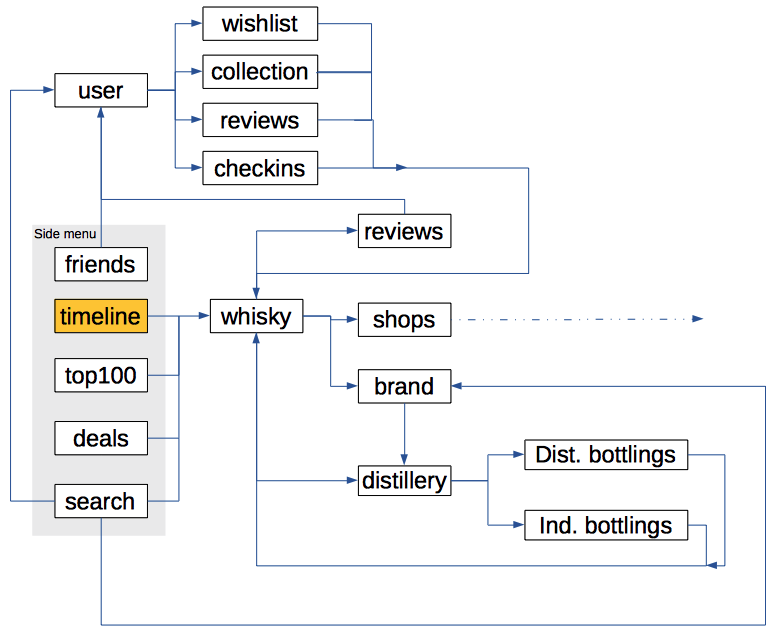 People sometimes recommend against cyclic navigation from a UX perspective is because the user might have to backtrack quite far to get to the original page they were looking at.

Is this really a problem?

No, not in practice. In fact, most apps which revolve around discoverability have cyclic navigation. For example, the iTunes, eBay and Amazon apps: 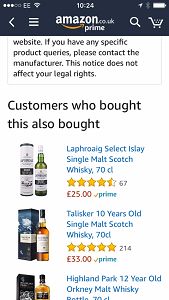 The reason it's not a problem?

Because at any point the user can press the menu button and navigate directly to a category, instead of pressing back multiple times. 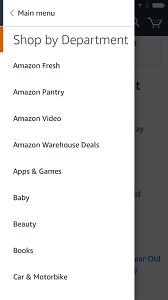 And any disadvantage is vastly outweighed by the benefit of increased discoverability.

Additionally, you can show recently viewed items to give the user confidence that they can return to something they've previously viewed, without having to rely on the back button.

The eBay app displays this prominently on the homepage of it's app: 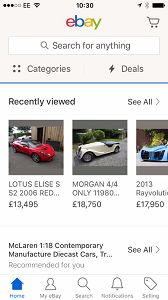 A personal aside: As a whisky drinker myself, I think most of the whiskies I've bought were discovered while cyclically navigating the Master of Malt website. Without cyclic navigation, I would never have otherwise discovered them :)

In an app, this is not really a UX problem and a bad UX practice. In my opinion, this is a lot related to the used technologies if circular linking creates some dependencies. Also, in some cases, this can influence SEO, but for UX I think is actually a good practice to have a logical navigation that is easy to use.

I think your app navigation organizes content by placing it within a hierarchy and having links between screens doesn't make it necessarily circular.

a link that goes from one part of a website to another part of the website that is not in the same hierarchical branch, thus breaking out of the pure hierarchy.

Hierarchies are often a very clear organization for a website but don’t fit all types of information. Crosslinks can be very useful for providing alternative paths through a site, but can be confusing if not carefully presented to the user because after clicking on a crosslink, they can end up in an unexpected part of the site and be disoriented.

If displayed in a reasonably clear way (e.g. made distinct from typical hierarchical links) and used sparingly in places where crosslinks are obviously meaningful and appropriate, they pose few problems, but user testing is recommended if any confusion might occur.

Not the answer you're looking for? Browse other questions tagged navigation mobile-application or ask your own question.

4
How to solve/avoid “circular” navigation on an iOS app
0
Trying to merge a navigation menu with breadcrumbs
3
What is the best way to organize the categories in this app?
4
Mobile App Design: Horizontal Swipe vs Vertical Scroll to browse a social feed
15
Mobile app navigation: Back vs. cancel
6
What is the way to show sections (chapters, bookmarks…) in videoplayer for mobile?
3
Which layer to end tree test on?
1
Tab navigation: top-level and second-level targets, how to deal with them?
4
Best way to scroll long content on mobile screen?
0
Organizing two kinds of navigation in a mobile app