Was USB-A always intended to be reversible?

We all know one of the problems (one might say major UX design flaws) with USB-A connectors is that it is difficult to know which way is the top leading to users plugging connectors in upside down. 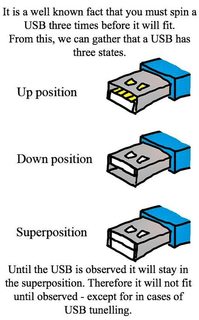 Recently, reversible USB-A connectors have found their way to market. But the fact that this is possible leads one to wonder if USB-A had from the start been designed as a reversible standard but for whatever reason it was only implemented now. Is this the case?

Question: was USB-A's symmetry supposed to be part of a reversible design that was not implemented until now? I.e. , it's not a bug but a feature? 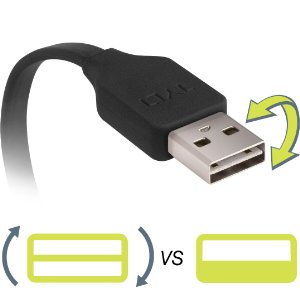 No. It is most likely the inverse; people having issues with plugging the old connector in sparking the idea of reversible connectors.

Although I haven't found an official spec of the thickness of the white plastic part, here are a bunch of vendor diagrams that show it goes to exactly or very very nearly the center line of the whole connector.

cropped from this picture via jj-conn.diytrade.com

The whole connector is 4.5mm thick, while the white part ends at 2.3mm. The absolute center would be 2.25, so there is a 0.05mm gap but that's for sliding it in and material variance. 0.05 or even 0.1mm (one or two sheets of printer paper) isn't thick enough for a contact board. For comparison, already-quite-fragile contact board is 0.7mm.

While this doesn't have as many measurements, it does show the center line, and you can see the connector just about touches it; only a pixel or two difference.

Basically, both plastic parts (male and female) of USB are the same size, and both come up to the middle of the metal enclosure. I assume/speculate this is either for production simplicity (both sides can use the same PCB) or to ensure both are about equally as strong/durable. Aside some production margin, there's no space left over.

Old computer connecters tended to use slightly trapezoid connectors. These would be recognizable from the outer shape of the connector. PS2 connectors were also very visibly directional. As are network cables. And none of those were meant to be swapped very often.

Things like headphone jacks were meant to be used alot, but they are extremely omnidirectional.

USB-A is somewhere in between. It looks reversible, but it isn't. Yet it's used a lot. So it's the first (common) cable that showed that reversibility could be a problem.

Of course, hindsight is 20/20 and it should have been tested, but at least we nowadays have USB-C as a reaction to this first-world problem.

3 - You could make it reversible, but it'd not look like USB-A at all.

USB-A currently has a one-on-one connection, with each part being 50% of the space. To make it reversible, you'd need a one-on-two connection. You could either have two boards for the female, and one male in the center, or two male boards and one center.

red is male, blue is female.

And the 2 males with 1 female version is basically USB-C.

The smaller you make an element, the more fragile it tends to become. USB-A currently has a one-on-one connection, with each part being 50% of the space. To make it reversible, you'd have to thin either one or both sides, because you'd have a one-on-two connection. You'd have 3x33%, or 1x50% and 2x25%, or something similar.

It would also be more complex, having more elements that need to be wired up, and thus more things that can break.

And one last thing that could be lost, is that in the 1M-2F variation, none of the boards would be connected to the metal encasing. With USB-A and USB-C, the male board touches the casing, which means it can't bend. However in all 3 variants the female board is still free floating, and thus fragile.

Note; fragility is actually a point of criticism for USB-C, and I'm inclined to agree. I think a setup more like lightning cables would be stronger, at least for the female connectors. And female connectors tend to be inside (expensive) electronics, while male connectors are on (cheaper to replace) cables.

5 - How do the reversible ones work, then?

They take any leeway they can with the spec.

According to the omron schematic, the casing is 5.12mm, with roughly 0.2mm sheet metal thickness. That leaves 4.72mm for a very tightly fitting connector. The connector is only specced at 4.5mm, so that leaves 0.22mm. If you also reduce the sheet metal thickness from 0.2 to 0.1mm, that nets you another 0.2mm. A total of 4.2 mm. If we add in flexing of the board, and other places to bend the rules, we can get pretty close to the 0.7mm thickness of a USB-C connector.

Of course. this has several downsides. For one it obviously makes the whole construction more fragile. Two, because everything is pushed to the limit, it'll be very tight to put in/out, and there might even be ports that you can literally not put it in. Three, the flexing means you have a very small contact surface.

So all in all, this doesn't seem a very durable connector, but a pretty clever hack nonetheless.

I've bought a chinese cable like this and its center part moves a little bit up or down (depending on the way you plug it in). IMO, it's not very reliable.

So i do not think, it was intended to be reversible.

P.S. the other end of the cable is a reversible micro-usb which doesn't have moving parts but is harder to plug in than a "normal" micro-usb.

15
Any data available on using Skeuomorphic Design in apps?
2
Should selections of 'other' always auto generate fields for the user to populate
6
Clicking twice to edit filename - what are the reasons for this pattern?
3
Custom liking function - do I need user login?
3
Showing users what kind of content is behind a link (popups)
3
Do fine-grained message statuses (such as when a message was seen) help usability?
2
How to improve the experience of finding a stall in a public restroom?
2
Why do desktop applications place settings in one dialog?
0
complex time-Input on mobile
3
Is anyone aware of (or has anyone conducted) research into the user experience of 3D televisions?