Why do messaging apps color the user's messages brighter than the people they message?

You would think that the messages you receive are the primary focus of a messaging app, since you spend most of your time reading them. However, many big messaging clients like iMessage and Facebook Messenger highlight your own messages in bright colors, and color the other messages more neutrally. Because of this, the user's eyes are automatically drawn to their own messages.

Is there a reason for this? I know iMessage uses the colors to indicate whether a message was sent using SMS or data, however it doesn't seem to make much sense in other scenarios. What am I missing? 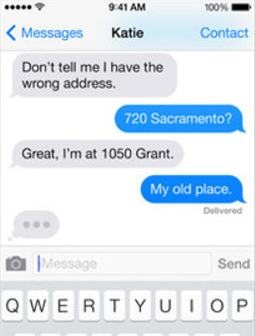 The starting point is that it's useful to distinguish between "text I wrote" and "text people wrote to me," and color is a simple way to clearly make that distinction. (It's not the only way, certainly -- the left/right alignment indicates the same thing -- but the color distinction certainly makes the difference very clear indeed.)

As for the choice of where to put the color and where not to: Hold your phone some distance from your face, or take off your glasses if you wear them, and see which text is more prominent / easier to read.

For a received message, it's important that the text be as readable as possible, so it's displayed in a high contrast black-on-gray. Your eyes are drawn to the text itself.

For sent messages, it's less important that the actual text be readable, because you presumably already know what you wrote. Therefore a less-readable white text on colored background is acceptable: your eyes are drawn to the message bubble itself ("I said something at this point") rather than the text contained within it ("I said this specific thing").

(There's also going to be a certain amount of 'the colorblind need to be able to see the difference', 'it just looks blah without some color', and 'similar existing apps do this so we will too' mixed into the equation, of course.)

I think you answered your own question but missed out on the concept of what's primary.

Q: What is the primary action of a messaging app?

A: Sending a message

A: Because the person of interest here is you and your action is taken as a priority.

Just like the primary action of SE sites is to ask a question hence you'll see the Ask Question button highlighted even though getting the answer and answering are also necessary. Hope this helps.

Not the answer you're looking for? Browse other questions tagged usability design-patterns color or ask your own question.

7
Why does ESPN subtly change the color of some of its article text?
4
How make language option easy to find for people speaking another language than the one shown?
3
Studies about yellow increasing readership of technical materials?
14
Why print the text of a color name in that color?
5
How should you create simple, color-coded graphics for color-blind people when the graphics are particularly thin?
3
Do fine-grained message statuses (such as when a message was seen) help usability?
3
What is the best UX for collecting a user's height in metric rather than imperial?
1
On water fountains, why the blue tap is supposed to be colder than the white one?
1
Color Palette Accessibility for White Text Button Labels
0
Why most vehicle apps user orange / red color as their theme?