I have a game where players will play 2x2 decision matrix games. (Prisoner's Dilemma, Battle of the Sexes, Stag Hunt, etc). There are two players, a primary player (blue, on the horizontal part of the matrix) and a secondary player (red, on the vertical part of the matrix). Both players can make a binary decision. There are 4 potential payoffs depending on the combinations of the two players decisions. Unlike academic examples, the payoffs in this game are not symmetrical or mirrored. Each payoff value is a random number between -100 and 100. The payoff affects the players score.

This is the core gameplay mechanic so I need it to be intuitive and enjoyable. I've been play testing it myself and I immediately feel that the information is hard to take in.

Right now I have this very basic approach:

How can I improve this interface to maximize ease of use?

In general, too much interpretation is required.

The concepts of "Primary" and "Secondary" player are confusing to the reader. I understand they're probably crucial to the game dynamic, so they should be supplemented with some more familiar terms.

Building off dennislees excellent answer (which you should read first for context), I came up with this: 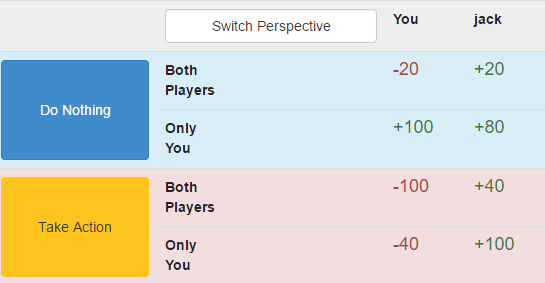 I split the 4 payoffs into 2 categories based on the decision within the users control. This puts the focus on the binary choice in front of the user.

A key part of this game is understanding what your opponent wants to do, so I added a switch perspective button to help visualize your opponents payoffs: 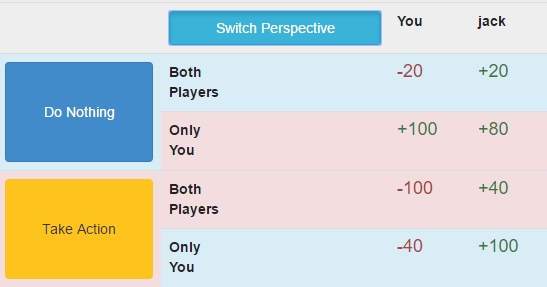 Not the answer you're looking for? Browse other questions tagged usability gui-design interaction-design interface info-visualisation or ask your own question.