A friend of mine recently asked me a question regarding his UI on an update prompt for his mod update checker for Kerbal Space Program. He currently have two options: An update is available: [Update] and [close].

He have got reports from users saying it is a bit obnoxious when it asks for the same updates every time they open the game, so he now wants to add an option to ignore an update entirely. /Do not prompt me again before a newer update is available)

My question is whether you have any better fitting suggestions for the alert button labels, or a "standard alert action text"

games alerts updating prompt
share|improve this question
asked May 31 '17 at 22:56

The text of the buttons seems fairly clear:

Remind me later I don't want to take this update now , but I might want it later.

Ignore this update I'm not interested in this update; please don't ask me about it again.

However, I do find the "Unsupported by..." line a bit confusing: both by it's positioning – between the information about the patch update and the Remind me/Ignore buttons – and by the use of a different set of version numbers.

I am not familiar with KSP, and precisely what this message is trying to say; the two obvious meanings seem to be: 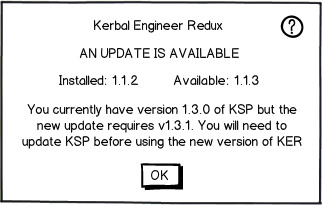 In the second case, you want to separate the updating of the patch, from the recommendation of updating KSP, e.g.: 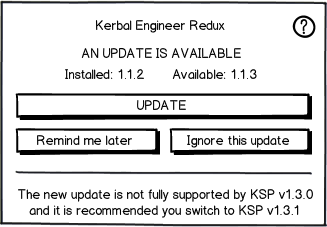 In either case, you may also want to consider adding a ? icon (or similar), as I have above, which can display details about the new patch to help the user decide if they want to make use of it or not.

Not the answer you're looking for? Browse other questions tagged games alerts updating prompt or ask your own question.

27
UX for Game Development?
4
Decline in JavaScript prompt() usage?
2
When would the best day to update your webpage be?
1
Game UX for hero with upgrade-able collectable boosts
15
When there's inactivity…should we prompt the user for action?
2
Default values for text-based confirmation prompt
2
when to ask for validation prompt?
1
Position of a delete prompt?