Why do video sites let users choose the resolution?

Youtube does a good job of automatically changing the resolution based on the current viewing size:

When designing a video site, shouldn't we remove these resolution controls to simplify the interface? This is assuming we have the progamming logic to correctly choose the resolution for the user.

I am happy with the Youtube solution. Internet in Australia/NZ for example is much slower than in USA, Europe or Asia, and quite often you don't have a internet flatrate, but either pay per MB or get a Quota of x GB/month before they throttle you to dialup speed - so i usually choose the 240 resolution, even if my bandwidth would allow me 360 without (much...) buffering.

I always hate it if some software tries to outsmart me because it thinks it knows what's best for me and wont allow me manual adjustments.

Because sometimes he wants to watch video later on fullscreen and he doesn't have enough download speed to watch it without delays. Also, clicking on YouTube fullscreen button stops video and starts loading new resolution, which sometimes connection of users can't handle or buffering time is too long.

All these 360p, 720p... are sometimes too hard to understand by end user and should be replaced by something like "HD". Vimeo is a good example here.

I've added an example for user with medium download speed (of course this window can be optimized). 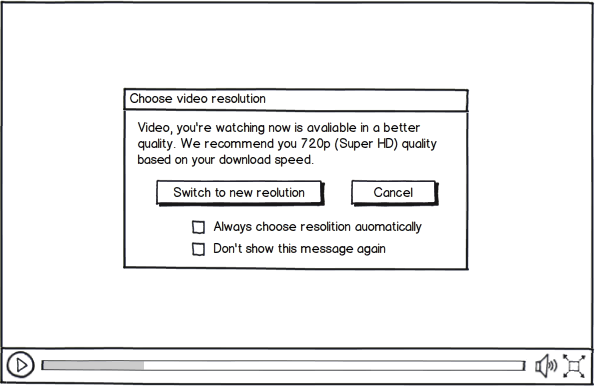 It's the eternal trade-off between providing so little control that it frustrates the advanced users (Apple), or so much control that inexperienced users can easily ruin their own experience (Linux).

Also, you always have the edge cases - e.g. where someone is on a low bandwidth but it's important for them to see the video in HD and they don't mind waiting a bit until it buffers. Also, connection speed changes all the time, based on whether I have other concurrent downloads. So for the same user, on the same computer, watching the same video, you're going to offer 360p one minute, and 720p the next (once the other downloads finished)?

I hope that the real explanation is just based on research. They can easily track how many people really use these functions, and what their connection speeds are. They might see in the data that people play around with them even when the bandwidth doesn't require it.

There's also the marketing angle. If your competitors offer a specific functionality, you might want to boast having it too, even if it's not really required or makes the interface more cumbersome. Only a small percentage of people will be aware of the technical downsides, but everyone will see that Vimeo supports multiple resolutions, and Youtube doesn't.

8
Should video be used on home pages for company brochure sites?
2
Where do you position the title of a video?
1
Why do mobile video apps encourage taking short videos?
0
Optimal video resolution for lecture videos on a tablet-PC
3
How to let mobile users know that an embedded YouTube video is loading slowly
11
Should clicking on a playing video take the video to fullscreen?
6
Should video lightbox "remember" the last video position?
1
Users' attention to minimized video
1
What are the benefits of having a hero with video background?
1
On/off functionality inside a dropdown?