Ask Question
Asked 4 years, 8 months ago
Active 4 years ago
Viewed 13k times
64
This question already has answers here:
Is there any advantage in marketing my product for £99.99 instead of £100? (7 answers)
Closed 4 years ago.

Whenever I go to a fast food restaurant or a store, I noticed that the product prices end with a 9 rather than a 0.

Please see the example below. Even though the difference is just 1 pence, people perceive £2.99 as a much smaller number than £3.00. That is because the price ends in 99. 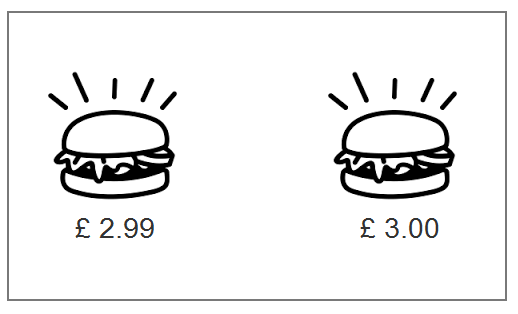 Now, please take a look at the second example below. Even though the price is not ending with "99", people still perceive it as cheaper. What is the reason behind this? 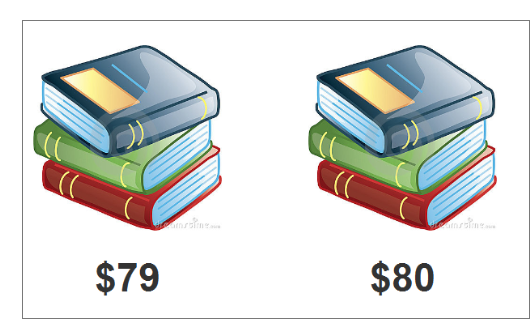 Ending a price in .99 is based on the theory that, because we read from left to right, the first digit of the price resonates with us the most.

Another common pricing cue is using a 9 at the end of a price to denote a bargain. In fact, this pricing tactic is so common, you’d think customers would ignore it. Think again. Response to this pricing cue is remarkable. You’d generally expect demand for an item to go down as the price goes up. Yet in our study involving the women’s clothing catalog, we were able to increase demand by a third by raising the price of a dress from $34 to $39. By comparison, changing the price from $34 to $44 yielded no difference in demand.

We (the fast food chain) found that customers don't want to spend $3 on our hamburger.
Customers are willing to pay somewhere in the $2 range.
Our customers focus on dollars not cents.
So, anything less than $2.99 is throwing cents away.
The board gets mad when we throw money away.

Pricing is complex, Humans are lazy

I might almost go so far as to say we're dumb — but that's too far. Cognitively speaking, we look for quick, simplistic answers. In the case of pricing, consumers make glancing assessments based on prices we've encountered in the past. This assessment can psychologically override the actual value of the item. This is especially true for lower priced items, whatever that threshold might be.

The complexity of minute changes in price have been studied extensively and generally fall under the label of Psychological Pricing Theory. Read that page on Wikipedia for a lot of detail and some historical findings.

One key point, is they way consumers "round" the price. It's a higher level issue than simply left-to-right reading. It has to do with orders of importance. Specifically, the dollars are psychologically more important than the change. As quoted in the Wiki article:

Consumers ignore the least significant digits rather than do the proper rounding. Even though the cents are seen and not totally ignored, they may subconsciously be partially ignored.

Fast Company wrote an article, The Psychology Behind the Sweet Spots of Pricing, that speaks to a related concept.

According to a study conducted by Kenneth J. Wisniewski from the University of Chicago, when the price of margarine dropped from 89 cents to 71 cents at a local grocery chain, sales improved by 65%. But when the price fell two cents more to 69 cents, sales jumped by an astounding 222%!

FastCo also proposed that the digital age may have introduced new sweet spots, but this has not been proven out yet.

Historically, pricing format has also been used as a means of record keeping, odd as that may sound today. Some retailers, even up to my experience in e-comm 10 years ago, used one format for regular prices and another for sale prices. Picking up on the theory that .99 performs better with price-sensitive buyers, many companies made that their sale standard. This has a compound effect: Consumers are subsequently trained to recognize 99 as the sale number.

Working in the e-comm world for several years, I had the opportunity to evaluate some very interesting pricing studies. The exact numbers varied, but the common factor in on-line buying habits was that anything after the dollars was effectively ignored.

In the data I reviewed, the 99 effect was not as dramatic as discount retailers have seen. I worked primarily with mid-range and some high-end markets. Interestingly, in these markets, we found evidence that the price brackets had a bigger impact than the 9s. For example, pricing an item anywhere between $40-49 made very little difference. As soon as that item moved into the $50-75 bracket, volume would decrease.

For mid-range markets, these brackets tended to brake down as follows:

* Those zeros aren't accidental. At these points, consumers responded best when the high point in the bracket stuck to the even dollar amount. In my findings the 99.99 and 149.99 points showed that it wasn't simply a matter of crossing some imaginary line. Some colleagues suggested that 25 and 75 became magic numbers after the 100 mark. YMMV ¯\_(ツ)_/¯

Effectively, it appeared that in mid-range price points consumers were mentally focused on the tens rather than the ones or cents. Price sensitivity up to a given bracket's _9.99 was fairly light. Crossing into the next bracket triggers a spike in that sensitivity and volume was disproportionately impacted.

One side-effect worth noting: I have also seen an inverse effect to the "deal shopping" mentality. Consumers of high-end items (jewelry, haute couture, fine decor and furniture, etc) aren't supposed to care about price. That's part of the status of owning those items. In those markets, I have seen evidence that there is a sort of branding effect that happens when the price is set with .00, no cents notation at all, and even no $.

For example, a dress from a Parisian high-fashion designer valued at about $4,600.00 could be priced according to any of the following formats:

From what I've seen in tests between $200.00-599.99, #4 would be the winning option. To a status- or craftsmanship-conscious buyer, my hypothesis is that this format shows confidence in one's product and an unwillingness to compromise. #1 in particular implies a sales rather than craft focus and may turn this consumer away.

The main reason to end a price for product in .9 or .99 is human psychology.

Research has proved that "Consumers perceive such prices lower than they actually are. So that additional 1 pence seems much more valuable to a consumer than it actually is."

Consumers tend to "round down" that value to the nearest dollar. E.g., $9.99 would be rounded down to $9 instead of up to $10. So the perception is actually getting the product at $1 less, instead of getting it at $0.01 less.

This is where that additional one pence would make a great difference (in consumers mind and not in actual value).

You can find a lot of research on the internet under "psychological pricing". You can start here: https://en.wikipedia.org/wiki/Psychological_pricing.

Contrary to what appears to almost universally believed, the original reason for this practice was to prevent fraud. It was to keep the customer at the counter until the transaction was completed, in the days when the sales docket and the money tendered were whisked overhead in a basket to a cashier. By making sure there would always be change to give back to the customer, the opportunities for sales assistants to perpetrate frauds were reduced. They had to write e correct amount on the docket, tender at least that much money, wait for the cashier to check it, wait for the correct change to be returned, and return the change to the customer. So the customer had an interest in waiting for the entire internal transaction to complete correctly.

For me, this goes back to our infancy where counting numbers was something hard and fun when done right. So there's a bit of excitement into the "almost promoted" number.

It's the first time we start dealing with the main number system used today, the 10 base system and the numbers start changing into something different, a double digit one. So from the teacher, we get a reward for getting to another digit every time.

For no confusion let's call it the Promotion factor

When our brain interprets the number there's a cognitive tick to the fact that the number is almost another number.

So what I see is that the customer get's this subliminal message that says "Yes! you counted well!" which taps to our childhood memories.

And this triggers being the promotion to another number just .01 away

In the end, when the time of decision comes to mind there's the embedded information of the promotion factor and that renders more excitement to the decision of taking the .99 ( which alleviates some of the need to get out of the anxiousness of choice-making )

Let's say we all know a better-looking package attracts more clients and this one is in your cognitive process.

As an example of this factor think of how more exciting is when a sports team wins by a close number rather than when it's far away. Maybe you could also measure with a set of length varied strips on a paper, randomly arranged and linearly arranged (like 1, 2, 3, 4, 5 centimeters strips) and ask someone which seems more dramatic and one will mostly look more dramatic than the other in comparison.

This shows how information can too yield emotion by itself and when this emotion is something that says we counted well then it's assuring towards the anxiousness of having to choose between two good options.

Not the answer you're looking for? Browse other questions tagged price-range prices or ask your own question.

1
Total price on the product page before "Add To Cart" button, why not?