Formula for color contrast between text and background

In my Android app a user can choose the color of an item. This color is then shown in background with a text on it. I want to display the text either in black or white - depending on the background color.

Is there a formula to calculate when it is better to show a text in white and not in black? I guess I am looking for the darkness of a color and the exact value when it is more black than white.

Yes there is a formula. I wrote an article on high contrast colours recently that charts the variation of black or white (actually off-white #f0f0f0 and off-black #101010) as the foreground colour with the highest contrast ratio, for ranges of background colours.

The charts I created are below, along with some of my notes from the above article.

Each colour cell has a circle:

In the first chart, lightness is a constant 128, while hue and saturation vary: 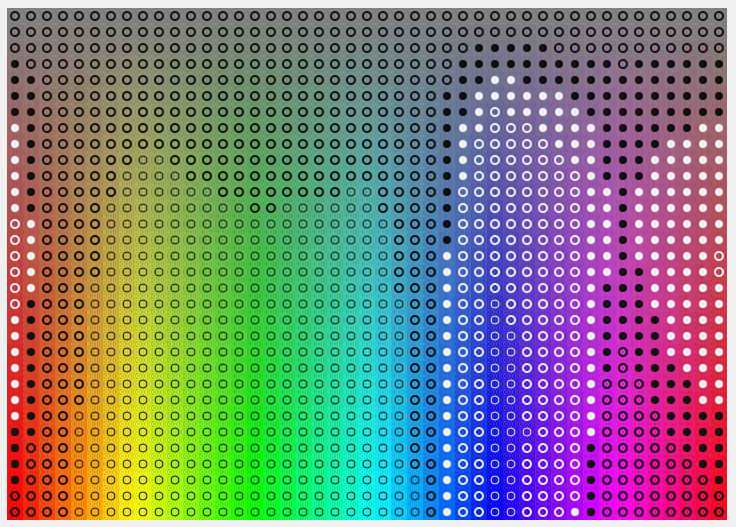 It’s interesting to see that black is generally much better than white, except in the blues and reds. There were no yellows and greens where white was better and black has a contrast ratio of over 7 for a great swathe of those yellows and greens, while white struggles to get the ratio over 7 except in the purest deep blues. The gap in the purples where black again excels is intriguing too.

In the second chart, saturation is a constant 255, while hue and lightness vary: 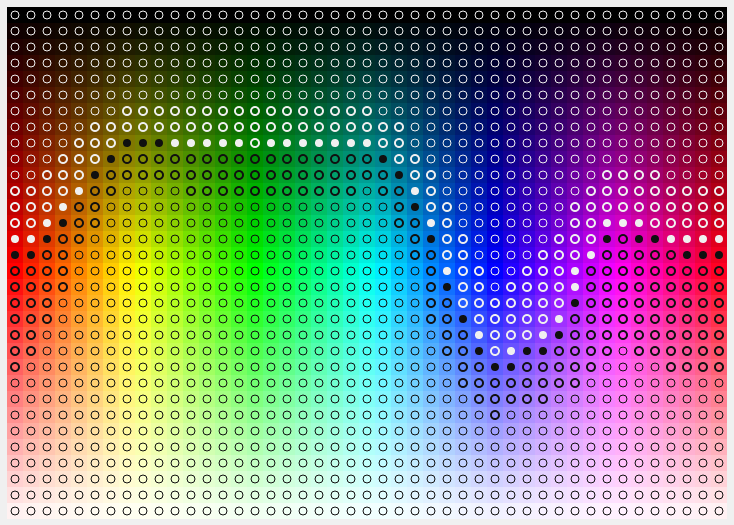 Unsurprisingly, white works on black and black works on white, but again black dominates overall except in the blues. Black dominates most against the yellows. There’s not a lot of surprises here, but it’s compelling to see the evidence laid out like this. Unlike the varying saturation, here a vast majority of the ratios get above 7 (the thin circles).

You should choose the text color such that success criterion 1.4.3, Contrast (Minimum), of WCAG is met. It turns out that the required contrast ratio of 4.5 can be met with any choice of background color, and an algorithm to make the choice of white vs. black text is quite simple.

Step 1: Convert the input color (background in your case) to HSL. Actually, you only need the luminance (or lightness). See the definition of relative luminance in WCAG 2.0 for a formula to convert from RGB space.

Step 2: The formula for contrast ratio given in the WCAG 2.0 definition can be rearranged if we know that the text will be black (luminance = 0) or white (luminance = 1). So, let the input color's lightness be L, then:

There is a small range of color where either choice would meet the contrast requirement, so using a cutoff value where the contrast ratio is equal in both cases makes sense, which occurs at 0.1791 (Wolfram alpha solution). Alternatively, you could back off slightly from using pure black and pure white, but you'd need to redo the algebra.

Note that this is a simple algebraic proof of the result obtained in the answer given by @roger-attrill. There are many more colors with lightness above 0.175 than below 0.1833, so black usually is the better choice.

Not the answer you're looking for? Browse other questions tagged accessibility color contrast or ask your own question.

2
Determine the best text color for a given background color

16
Choosing high contrast text color (in relation to background color) dynamically
10
How to automatically calculate contrast
2
Appropriate color for updated row data
13
How to measure the contrast between any given color and white?
10
Material Design - text colors don't maximize contrast
10
Mostly white screen (8 hours per day)
4
WCAG 2.0 color contrast - How strict do you need to follow?
1
Color Palette Accessibility for White Text Button Labels
1
What is the procedure for measuring color contrast around anti-aliasing?
1
How dark does a background have to be before white text shows up better than black text?