How will the Metro user interface improve the desktop experience?

I'm trying to understand the "buzz" in regards to the "metro" design in the upcoming Windows 8 user interface. I find most commentators as being thrilled, excited, can't-wait. Hardly anyone disparages it. From this: 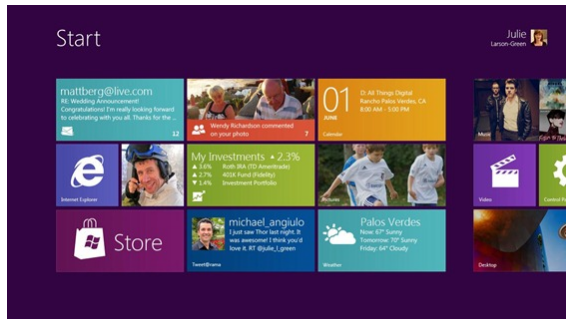 How does this metro user interface improve the desktop experience?

The guiding principles of the Metro Design Language state the following:

Typography. Type is beautiful. Not only is it attractive to the eye, but it can also be functional. The right balance of weight and positioning can create a visual hierarchy. Additionally, well placed type can help lead you to more content.

Motion is what brings the interface to life. Transitions are just as important as graphical design. By developing a consistent set of motions or animations, a system is created that provides context for usability, extra dimension and depth and improves the perceived performance of the whole interface.

Content not Chrome is one of the more unique principles of Metro. By removing all notions of extra chrome in the UI, the content becomes the main focus. This is especially relevant due to the smaller screen size and gesture-based interactions.

Honesty. Design explicitly for the form factor of a hand held device using touch, a high resolution screen and simplified and expedited forms of interaction. In other words, be “authentically digital”.

I really like where it's going - but I'm also interested in typography and design so this catches my attention.

Firstly, I note that the 'funky' new UI and the 'traditional' old UI are going to exist together - you will have a choice to go Metro or go Desktop, albeit a generally improved desktop, building on the success of Windows 7.

We've already seen hints of Metro style design and interaction with apps like the Windows Media Center introduced with XP - clean focused design without the clutter, where the content is king and the user has less questions and less distractions. And of course it's the UI for Windows Phone 7, which has been a good place for Microsoft to gather feedback. As a result, some of the improvements will come from better performance, faster reactions, less memory used, longer battery life for laptops, less hardware dependency - all the things which were originally targeted at the mobile touch experience.

If you decide to stick with Metro, initially you'll probably only get interaction with Microsoft Windows applications - mail, browser, calendar, pictures, etc, and a smattering of others. But until software providers really get on board with Metro, the more niche apps are not going to be available unless you load the desktop. This means that it depends what you use your PC for as to whether you use the Desktop or not.

The screen posted in the question is simply the Start screen. I like the multi-channel input without the fuss - magazine style. Essentially it's a lifestyle interface. (That means not a developer interface!) It seems to be targeted towards home users who just want to use their favorite apps - media, email, browser, social apps and the like and if that's the type of user you are, then it's likely that the experience is going to be more direct, more intuitive, faster, more immersive, more friendly and more accessible. If you are not that user, then you won't be using Metro - you'll switch to the desktop.

We've got two main PC's in our house - a family PC and mine :-) I could easily see the family PC sticking on Metro, but my development PC definitely won't.

The colors: Microsoft has always allowed you to change the UI's colors in the past, and Windows 8 should be no exception. My laptop is black and the purple looks ugly on it.

The new UI: Microsoft is moving away from the traditional desktop approach. Instead of having many application launchers on the desktop, you now have many different informations on the desktop.

This approach works for smartphones, at least in my opinion. Pull out your phone, look at the screen and you see if something interesting happens.

The problem is, what I can see from the screenshot, is that it makes launching applications harder. And it's quite important for desktop operating systems to be able to launch applications fast. In this screenshot, it doesn't look like you have an easy way to launch an application. For example, in Windows 7, you press the "Windows" key, enter the application name, or a part of it, and press enter. Simple (I don't use my desktop icons at all). The "Metro" UI will have to provide a similar feature, or it will fail. As long as it does provide such a feature, I see no problem with it.

Not the answer you're looking for? Browse other questions tagged metro windows-8 or ask your own question.

8
What lessons can we learn about Metro UX from Windows 8?
4
What's the best position for the global navigation of an application within an intranet site that has its own global navigation?
6
Does Metro scale?
1
Are there any recommendations for the look of Metro UI table?
10
Can a mobile application be made using a totally flat design?
2
Facebook user and friends user display patterns for Windows 8 Metro App
0
Metro guidelines or windows Desktop UX guidelines