I'm working on a simple music app for a client. There's a switch that triggers a backing track/beat that users can play sounds over that looks like this (the client insisted on the flower icon, don't judge):

Users are supposed to be able to choose between various beat patterns. I'm thinking about using a popover to allow users to change their beat pattern, but I'm not sure what the best way to indicate the popover is.

I've considered the detail disclosure button, but are there any ideas on better ways to either trigger a popover or allow a user to change the beat pattern?

A gear icon would be more suitable than the i icon.

The latter tends to be used more for help, whereas the gear icon is used for preferences.

From a UX perspective, a button which tells the user the action it performs would be less ambiguous.

Applying a drop shadow can also be used to indicate pliancy/pressability.

However, as you're already using the flat flower icon as a button, I'm assuming you have a flat interface.

This isn't ideal from a UX perspective as it's difficult to show pliancy in a flat interface.

But using a similar style to an iOS list item might be an effective compromise. It's used commonly in iOS apps, so it should meet the users expectations. 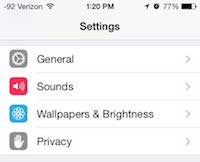 Not the answer you're looking for? Browse other questions tagged ios popover or ask your own question.

2
Is a popover that opens from a tab bar good practice in an iOS app?
0
iOS: Best way to present and receive user input?
0
Best way to turn down iOS users with legacy version of iOS
28
When should I use a popover vs a tooltip?
95
What's the difference between a Modal, Popup, Popover and Lightbox?
1
Indicate label can be tapped to expand (iOS)
1
Contextual actions in mobile/ios best practices
1
Popover Menu with Only One Item, but Potentially Two
0
Navigation with icon to open page and open popover top
1
Best way to indicate secondary list items within an expandable list will lead to a new screen? iOS mobile app