How to design UI where you may enter only one of different values that represent the same quantity?

Behind the scenes they are the very same thing, and there are formulas to convert one into the other. In some situations users are used to using one, in some, the other, usually depending on given source of data. It is in a way convenience measure to the user.

I want to design UX to where user can enter either, comfortably. How?

What I have now is below:

I think it's in some ways clever in how the same input box is reused, but then there is an inconsistency in labeling when you enter one quantity instead of the other.

Is there a way to make it better?

I can create two input boxes, but doing so will suggest to the user that both should be populated, when it is not the case, and will create confusion.

What I've seen in these situations is a dropdown list with the two options, with the default one selected. 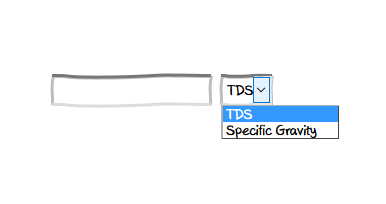 Not the answer you're looking for? Browse other questions tagged usability gui-design design interface human-interface-guideline or ask your own question.

1
How could I handle product returns through this interface?
1
Expert consultation request: Best solution for multiple choice and pricing of large number of products / services
2
Best way to show a multilanguage textbox
0
How to improve UI within a form, where a field can change type, based on data you want to enter
11
What is the term for a numeric input field of a specific format?
1
Always visible list for quick textual insertion
0
How can I tell whether to use input masking or magic inputs which accept any format?
3
Interface that supports "add new" and "add existing" for a many-to-many relationship
7
How do I handle wrong input in a multiple input field?