Are these religious icons clear enough without supplementary labels?

Given this UI (in HTML), do I need to put texts beneath the large images, or is the small image displayed in the lists enough to make the connection? 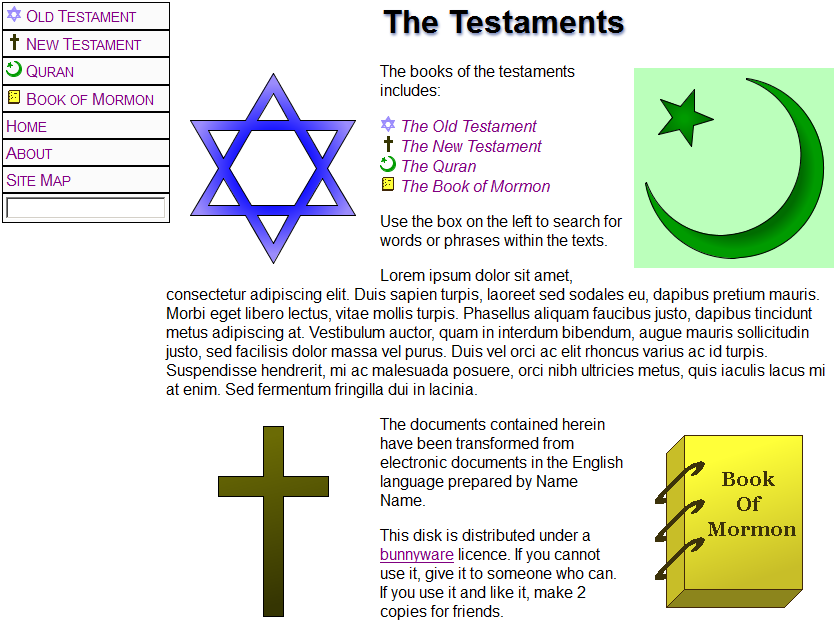 The client has signed off on the design above. They feel that the tool-tips combined with a BG on mouseover of the big image, with the BG color repeated for the menu and body links, is enough to make the connection. The colors of the small images have been made more obvious by not giving the image a black line border (doi!). In the screenshot, the mouse is hovering over the image for The Quran - though I missed capturing the tooltip.

The client is happy with the images themselves. (Which now have pretty gradients.)

Thanks to all for the tips!

I think you mean, does a user recognize the religion based on the symbols? If it's shown to a general audience, the answer is No. Well atleast I don't.

The name of the religion is needed below the image imho. The extra text adds minimal amounts in terms of UI, but could potentially make things clear for a large audience.

after the edit to the question

I still think you need the name under the image. The larger images are more prominent than the icons in the left, so a description under it is important. I doubt if the user will be able to figure out instantly the conventions being used in the site.

If you really cannot have a description, then I guess the least you could do is have a 'tooltip' with the name. It'l also help if you use the same colours as the images for your icons, users may match based on 'colour' quicker.

I'm not a christian, but I've grown so used to recognizing the 'cross' to represent Christianity, that when I saw the 'fish' I figured that it cud've been any religion EXCEPT christianity. :s

The practical upshot of all this is:

I understood the faith references, but did not immediately relate them to the relevant texts. The problem is that they relate more significantly to the faith than the book. In particular, the fish for Christianity (and while it is a recognised symbol within the Christian community, I do not think it is so widely recognised outside) would relate to the entire Bible - Old and New Testaments. Some Christians would be quite offended by the reference to the New Testament only.

I would interpret them as relating to the Talmud, the Bible, the Quran and my filofax. Which means that they are not immediately working. I would consider far more seriously the images you are using to reflect more closely the appropriate images, and definitely put text with them to clarify exactly what they mean. In this case, where there is some confusion or overlap between the different sections, I think it would serve better with text labels. Given that the links are to text, this may be more appropriate.

One problem is that people can get very heated up about religious iconography. They can easily become offended by this being used wrongly, and then refuse to use the site. Getting it correct is important.

(And I am an active Christian, and so know personally that some religious people are pains.)

Generally speaking (I guess this is a heuristic) symbol + text is better than text alone which is better than symbol alone. So I'd use symbol plus text.

Despite that, I'd use a cross for the Christian symbol. There are too many alternate religious interpretations of fish iconography.

And I'd also look again at the book. I understood it immediately, but I see other commenters did not. The beehive symbol would be an obvious choice (I think...) for Mormon followers (I may well be wrong here - if I am, apologies in advance), but it does not have wider recognition. You may have to do something banal like put the name of the Book on the symbol itself.

It depends. You can leave out the text in two situations:

Otherwise, include the textual name.

Also, you've made an error: You've used the Star of David for the Old Testament. But that symbol actually refers to Judaism, or in this context of books, perhaps the Torah. They are not equivalent. Therefore the Old Testament should also get the cross symbol. If you're going to include Jewish texts, then you can use the jewish symbols and names.

I know little about the Mormons. A google search for "mormon symbol" doesn't yield a definitive response, but it appears that perhaps a picture of Angel Maroni blowing a trumpet might be correct. "LDS symbol" gives an 8-pointed star. Here's a link: http://www.inplainsite.org/html/masonic_and_mormon_symbols.html

Not the answer you're looking for? Browse other questions tagged image symbols or ask your own question.

12
How can I distinguish two different types of buttons, without using labels everywhere?
0
Are these $ symbols awkward for UX on Who Wants to be a Mil... parody that's titled Who Wants to be an Expert?