I am working on in house LMS. It displays a list of courses in a card view. Essentially it shows

Now as per a new requirement, we have to display the course duration in hours and minutes. What is the best way to represent the duration so that it could be understood by most of users across world speaking different languages? 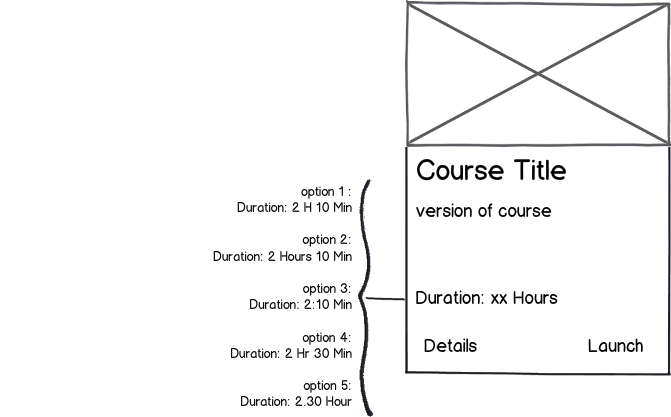 The answer of @Dominik Oslizlo is interesting, however the clocks seem a bit like full moons. I'd put it in the comment, unfortunately my reputation is still too low for that.

I'd suggest keeping the numerical form but reverting to international symbols of minute (apostrophe): 2h30'

And revert from using a decimal delimiter. For an engineer a notation of 2.30h can pose a riddle of "is it two and a half hours or is it two hours and eighteen minutes (0.3 of an hour is 18 minutes)?"

A tempting answer would be: adding clocks.

However, I think there is only one case when presenting the time visually this way really works - and it is when the time up to one minute or up to one hour. Then you could display a semi-filled clock.

When trying to represent the same within a day, hesitation arises as additional questions appear:

What is more, it is hard to show really small time pieces this way. Imagine an even 12-hour clock icon with 2h 10m marked versus 2h 30m marked on them – there would be no noticeable difference.

One thing you could consider, though, would be displaying two full clock icons, and one partially-filled – I think this could give quite a good reception and popular understanding, as for a course, the seconds measure would be automatically rejected and Users would understand that these clocks represent hours. However, I would strongly suggest supporting these clocks with a textual information saying e.g. "2:10 minutes", as it is hard, again, to show exact duration on such element. 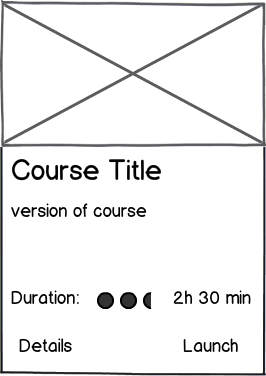 Should you need to show not just duration, bit starting and ending time as well, though, you may go for showing a timeline within a day. Then you would need to mark the start and end hours of the timeline itself (e.g. 8AM - 8PM) and mark the exact times and duration within these constraints. The problem is that for this to work, it would use up quite some space, or again it would be illegible.

Not the answer you're looking for? Browse other questions tagged time cards duration courses or ask your own question.

14
Whats the best way to present a time duration to user?
5
Best way to display date and time in a table with massive amounts of data?
1
Display time period/duration in hours/minutes and man-day in web project management tool
1
Is there a best way to ask the user for tenure?
5
Best way to allow entry of shop open hours
1
Most efficient way to ask users for days of the week and start/end time for each day?
0
Best way to display start time and duration (since the start time)?
1
What is the best input control for setting the duration of time spanning minutes and hours?
0
Standard to let user select duration for hours and minutes
0
Cross-platform mobile pattern for navigating among, editing, and creating cards