What control to use to modify speed of a player?

I need to make a player control for playback of history of states. The context is not important, it should basically act like in a media player. It is easy to use buttons for most functions, such as: 'play', 'next', 'previous', etc. The only part I am not sure about is the playback speed. This variable should make the simulation run faster, slower, and backwards. A dropdown is my current pick because it limits the user to set unreasonable high values. This is good and all, but it takes away the user's freedom to modify the speed in some form. The simulation could take a long time for example. 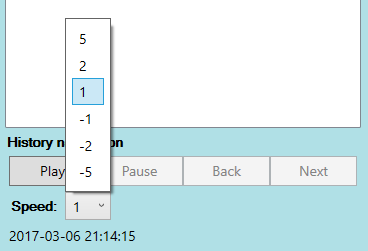 What is a good way to control speed in an user interface, giving the user freedom to modify the value, but also making it easy to use?

Do you feel like precise control speed are needed or nice to have?

Why do you need playback that goes backwards? If it is for navigation trough the media wouldn't progress bar serve better?

I think a slider would be the best widget, if you're happy to go off the standard HTML input types. Most libraries have one, like bootstrap and jQuery UI.

As mentioned in comments, most speed alteration controls, specify how much the speed is altered. Either by ranges 0.5 (for slower), 1.0 (for normal), and 1.5 (for 50% higher speed). An arbitrary range would cause cognitive load on the user, and negative number range might imply backward play. The range can also be represented by percentage, but a slider control might be too heavy at use, especially on mobile devices.

Not the answer you're looking for? Browse other questions tagged controls speed player or ask your own question.

7
Best way to give user two controls (expand and select) on a single object
10
What could I use for a tri-state control?
2
Speed vs Quality UI Pattern
0
Is it more useful to display the current speed or average speed for a download/upload?
3
Differing behaviours of the previous song button
6
For what reasons would you not include a volume control in an audio player?
0
Hearing capability in audio player
2
Should state be indicated by its control or should control and state be separate in the UI?
5
Carousel speed in mobile
2
Perceived speed - single question, multiple screens vs multiple questions, fewer screens