Scrolling for the elderly

I'm creating a mobile app that needs to be suitable for elderly people. As is common for mobile apps, scrolling is done by dragging the screen up or down.

However, I'm unsure if elderly people will figure out this behavior. There doesn't seem to be a lot of research on this topic.

What's the best way to implement scrolling for the elderly? Dragging? A scroll bar? Buttons with up and down arrows?

In my case, upon first usage of the app, the app is explained to the user (in person), so they can learn how to use it. But I'd like it to be intuitive anyway.

I'm sure there is lots to be find if you dig into the research papers, but as you noticed there isn't much within 5 minutes of Googling.

Modern multi-touch user interfaces in smartphones and tablets seem to be especially successful with people that have very little experience with "regular" computers (e.g. small children and elderly).

The metaphors used in WIMP user interfaces in desktop operating systems are really disconnected from the physical world. They're abstract and indirect. If you haven't learned what a scrollbar is and does it will be quite foreign, as such a thing doesn't exist in the physical world.

Touch interfaces are all about direct manipulation: push the page up and it will go up exactly as much as you've pushed it. In that sense touch user interfaces are usually more intuitive.

However, how you do understand that the text is not simply cut off and that you can push the screen up to see more of it? You can usually expect users to have learned to recognise these situations and how to scroll. If your app runs on a smartphone, you can assume that users will have learned common patterns of the OS, like buttons, icons and scrolling.

However, in your case it's probably best not to make any assumptions. Some suggestions:

Taking in consideration of the comments made so far, and since you focused on the scrolling issue only, I would think that videos, as mentioned by Koen Lageveen, are overkill just to tell how to scroll but I do agree that having 2 large buttons with text and arrows, as mentioned by Daniel Edwards, would work. 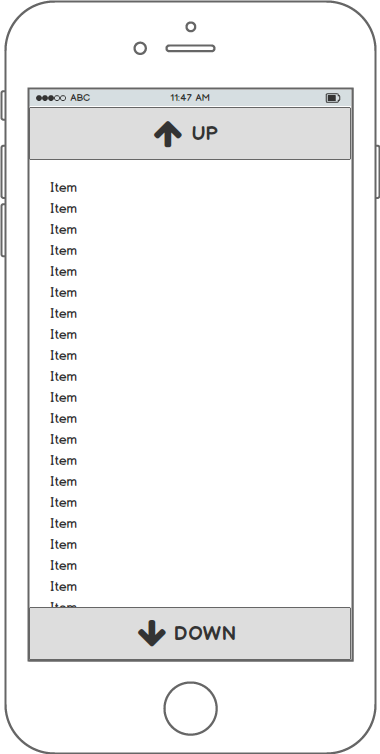 I used to create Telehealth applications which used Android devices that would just boot into our application and let the user do nothing else. I think our oldest customer was 105, most were over 70. These were used by some NHS PCTs / CCGs.

We actively avoided scrolling wherever possible (in fact I cannot think of a screen that had actual scrolling) as we found it confused users. They didn't even really like pressing the buttons as they were afraid of breaking the devices so would touch it very quickly. Scrolling would have been really out of their comfort zone.

What they did understand was buttons with arrows and text being explicit about what they do. For example we were taking questionnaires about their health, so the buttons would be big and bold, as would the text. At the bottom were two large buttons with "<- BACK" and "NEXT ->". This worked best for us. It would highlight as soon as it could detect touch.

Cannot find any larger images online, but this is the UI in a questionnaire.

Also as you're doing this on mobile, keep in mind that some elderly people do have trouble keeping their hands steady. Any complex (even dragging to scroll) is too much for them.

My best advice would be to keep everything as simple as possible, don't even worry about making it look nice. Our application in terms of style looked horrible but they liked it because it worked and was clear.

Not the answer you're looking for? Browse other questions tagged usability scrolling scrollbars older-users or ask your own question.

0
How to pan a panel in C# WinForms?
34
Is infinite scrolling justifiable?
16
'Scrolling divs' in mobile land. Yea or nay?
17
What's a good scroll bar equivalent for a spiral script?
9
Can we assume users know the devices they're working on?
4
How much scrolling is too much scrolling?
3
What's a good scrolling hint for partial-page content in iOS?
3
Ads: How to compromise between annoying users vs. more impressions + determining ad-free cost (mobile app)?
2
When reading a long passage, when do users tend to scroll the page?