How to handle a favorites page?

I'm working on an app for Android, in which the user can buy tickets for public transportation in Germany.

I want to add a possibility to add tickets to favorites to give the user a way to buy a frequently bought ticket faster. But if you can imagine there are a lot of tickets in Germany and if one user uses public transportation in 3 or 4 cities even the favorites page could be overwhelming with one day tickets and week tickets for each region as well as tickets for the trip between this cities.

Now I want to ask, which of the following options you think is the best? Maybe you have a better solution or recommendation.

EDIT: To make things sure. The app is like a ticket vending machine for the ticket itself in the first state. There is actually no way to search for a connection between for example Berlin Main Station and Berlin Alexanderplatz. The user must know which ticket he has to buy. This means there will be a shop with all one day tickets, week tickets and so on in germany (and yes, I know this will be a very long list ;)).

Other features like search for a connection and get the cheapest ticket recommended will be added later.

You should try to place yourself in a user's position.
If he's in one specific region right now, there's a high chance that he doesn't care about the other regions. So giving him the full list, even with a search, would be unnecessary, because he would just search for "Region XYZ" anyway.

What about taking your 3rd option but doing it automatically?
So a list that's already sorted by region. 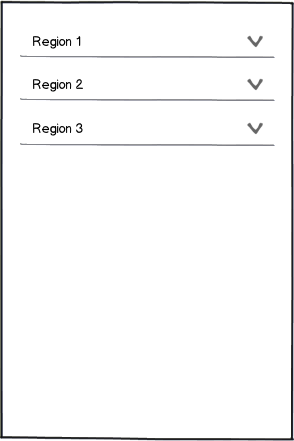 Maybe you can even list ALL purchased tickets in these sublists. There shouldn't be too many different ones to cluster the screen and you would take away the task from the user of thinking which ticket is important enough and which one is not.

But adding a search would probably still be a good idea.

add something like lists, which are customisable for the user. With this solution the user could add one list for each city/region.

The Favourites now has two categories

Within those categories are the individual journeys.

I would presume the categories would be catagorised but the starting point rather than the start and finish points. So Berlin Central to Meckl would be entered into the Berlin favourites.

The best case solution would be to create a location and usability intelligent favorites page that might go as follows:

Create a counter for the number of times a user uses a particular type of ticket in a city and then user the counter as your priority meter for queuing the cards for that city.

For example, if a user is in Wolfsburg and has previously bought a one-way ticket to Dusseldorf four times, a weekly ticket to Berlin two times, and a season pass to Leipzig five times but the user still has one that hasn't expired yet, following is how you would queue them in the favorites list for Wolfsburg: 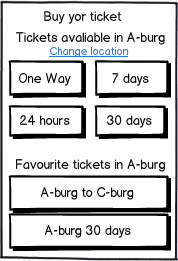 If the user chose to by a One Way ticket, she will be presented to the next screen. 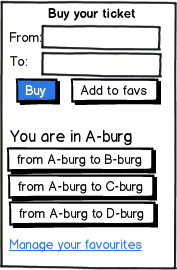 If the user wants to by a One Way, there is no need to show the other kinds of saved tickets.

This might work if she does the same trips regularly. A person traveling "randomly" from and to many different places might not have the same need of thos shortcuts.

Not the answer you're looking for? Browse other questions tagged usability mobile-application e-commerce or ask your own question.

10
Time Scheduler UI
20
Should users be directed to a 404 page or a landing page?
7
Is the "add to cart" button useful in product listings?
2
One page checkout with add to cart at the top to enhance conversation rate?
0
How to note that a ticket price is not the final price?
0
How to navigate between pages that show continous data?
2
Taking users from Offer's T&C page to Listing or Details page?
2
Multiple tables on a page displaying only the header row when empty, developer does not want to change implementation
0
Global search in product detail page (mobile) necessary?