I am currently developing a windows 10 Universal application, that can run on both mobile and desktop systems. It inherited a large code base and quite big number of features from a WP8.1 app, and alongside W10, new features are coming every month or so.

My current problem that has been the ever increasing number of features that have to be visible to the user. Here's some of the alternatives available:

It feels like it doesn't really belong on the desktop, as much as Microsoft is pushing it everywhere. It is an extra click that shouldn't be there to get to what you need.

It scales really bad with large amount of commands. If you have like 6+, on mobile you already have to scroll, which again, extra command for the user.

People aren't really used to it, and sometimes won't see it. Many articles on the web describe the problem.

These ones scale nicely on desktop, and somewhat OK on mobile, and it is what the application currently uses. However, at some point, there will inevitably be some nesting of features. There can only be so much to put in a menu.

On mobile, you can only out so much items in the menu until it goes outside the screen.

These are similar to the ribbon, but they support only a limited number of commands, and no easy way to achieve tabs.

They feel alien on desktop.

So here comes the ribbon...

Pros: It is somewhat familiar to most desktop users and will fit nicely there, as many productivity tools are adopting it, including windows explorer.

Provides much more space for upfront presentation of items.

Items are easier to discover and grouped in logical groups.

Cons: Eats space on mobile, so there has to be some way of folding it when it is not needed. Number of visible commands is still somewhat limited on mobile, but it is much bigger than all the other solutions, and, surprisingly, the most space efficient. I can easily manage to fit 12 commands in a 2x6 grid, and I can go as far as 18 with 3x6.

Not really something that you would expect to see on a mobile phone. Some users will be curious about it.

I have yet to see an application actually implement a ribbon on mobile. Would this kind of UI be appropriate for such devices? Are there other alternatives that would fit well on both types of devices?

What about an actual, simple "ribbon"?
I have an app on my phone that does exactly that: 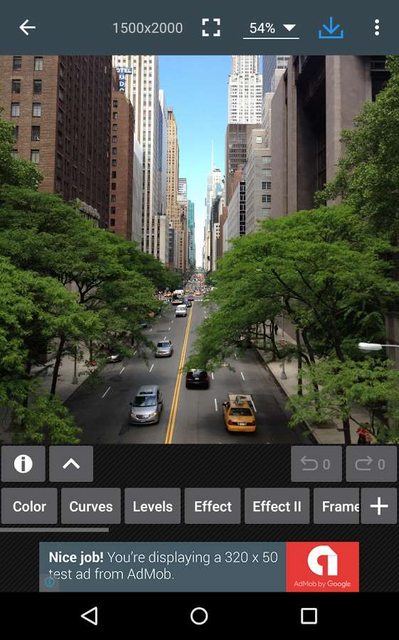 All feature categories are available in this horizontal list, like the tabs in the Windows ribbon tabs. Once you click on one, you get into a deeper level with yet another ribbon of features.

But to be honest I think I'm not able to judge the intuitivity of this concept anymore, because I am already used to it after using it for quite some time.

You can always go with a responsive design where you have a full ribbon on the desktop and an icon bar on smaller screens. My main concern with the ribbon on mobile devices is making sure your buttons are not so small that users will click the wrong thing accidentally.

14
Designing a Fluent Ribbon for a CRUD Application
5
Alternatives to Menu + Toolbar or Ribbon
3
Should Ribbon be used on the web?
2
Does swipe behaviour on mobile devices take into account left or right-handedness?
11
What breakpoint width to switch to mobile menu?
2
Full-width dropdown vs left sidebar on mobile
1
Too many menu items for a mobile tab bar
6
About Commanding in UWP apps. What commanding approach is best? office like?, UWP? or classic win32?
1
Scroll time on SaaS