Why not use darker backgrounds instead of white?

Why do so many applications and web sites use a white, or very near white, as their background colour?

Back in the days of yore when dinosaurs roamed the Earth, many graphical computing environments defaulted to a grey background. Amiga OS did, Mac OS did, Acorn RISC OS did. DOS and most other CLIs had a black background.

At some point we moved to white backgrounds, I think around the time that WYSIWYG editing became popular. But white isn't a great colour for backgrounds, especially back-lit ones like computer monitors. A little less contrast and a little less blue light seems to be the way things are going. Indeed, many programmer's editors offer this as a feature, when it used to be the default.

Why do white backgrounds persist? Why are they the default in almost everything? What benefit do they have, or is it a simple lack of most developers giving it much thought?

Here is an example of AmigaOS showing good contrast levels but not excessive brightness: 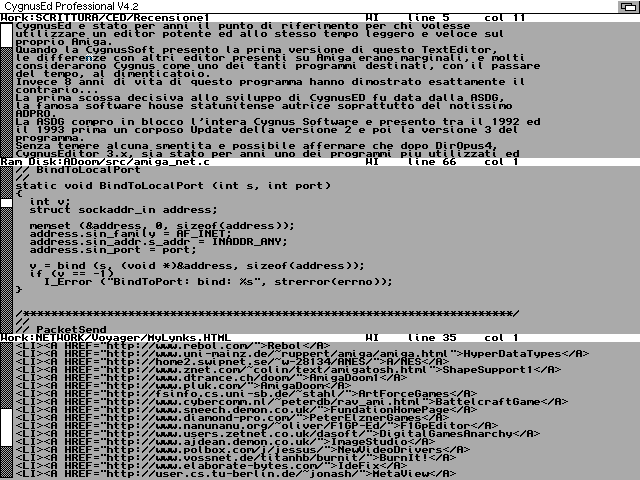 Studies by vision experts and usability experts show that higher contrast text is easier to read, period. So, black on white is best.

The American Academy of Optometry

Study after study backs up the conclusion that maximizing contrast maximizes legibility, specifically, with black text on white backgrounds.

Nielsen Norman Group tells us in “Low-Contrast Text Is Not the Answer”:

Summary: Low-contrast text may be trendy, but it is also illegible, undiscoverable, and inaccessible. Instead, consider more usable alternatives.

Check out Contrast Rebellion for a visceral demonstration.

So the science comes down on the side of black-on-white text. But does this work in real life? The fact that industry leaders including Google, Amazon, and Wikipedia have standardized on it should be a big hint that they have found that it helps them maximize their conversions.

(Non-dominant major sites may have found that using a slightly different color scheme, such as Bing’s grey-on-white text, help them differentiate their site without hurting their conversions.)

Your mileage may vary

None of this is to say that your site could not benefit from some other color scheme for text. You’ll have to find that out for yourself. But the question was, why is black-on-white text so prevalent, and the answer is: science and metrics.

I wouldn't say that white backgrounds are default. This page, for example, may seem white but it's actually gray (#FCFCFC) and the text is not black, it's gray too (#242729). You will rarely find #000000 text on #FFFFFF background in a professionally designed site or app.

Pure white and pure black do present a strain with long-term use, but the answer is not to dramatically reduce contrast to the point where you are trying to read mid-range gray on mid-range gray. A subtle reduction in contrast goes a long way toward reducing eye strain while ensuring readability.

292
Dark or white color theme is better for the eyes?

92
Is there a problem with using black text on white backgrounds?
21
Why do most financial apps use a black or dark background?
0
Putting content in white boxes on grey backgrounds
2
Why does Google Calendar use a RED 'Loading...' overlay
8
Grey versus white background for ease of use and readability/legibility
3
Why does so much software use gray backgrounds, from Windows to Chrome to Mac to almost every other software and website you come across?
3
Why are most product image backgrounds in ecommerce white
1
Why are card layouts with dark background not frequent?
5
Why do many prominent web apps use blue primary button with white text, when it fails the WCAG 2.1 contrast threshold
23
When to use white text on top of a color for readability?