Gmail vs Google Inbox. How bad would it be if Google kills Gmail now? [closed]

What's the difference between GMAIL and INBOX and why does google develop both of them? (even due they are both mail agents)

Google will not kill GMail, even if they kill GMail and ask users to use Inbox, people will start using Inbox.

A few factors why people will use Inbox if Google at all kills GMAIL: Google Search, Android, Youtube

Here's why it will not be bad for Google or users:

It hasn't taken too long for non-English people to get a grip on using WhatsApp because it is the best app which doesn't have a better alternative, and even if there is one - because of the user base most people choose WhatsApp. Generally, until you have a better alternative you keep learning/using the existing services even though the interface is changed overnight.

Millions of users stopped using Hotmail and Yahoo after the introduction of GMail and soon enough in 2012 GMail become the world's largest email service . People left the old options and chose the one that was better/fast/easy to use.

Since Google's Android is dominating the smartphone market and the majority of the users have their gmail accounts connected to their Phones and Data (like Contacts, Photos, Videos etc.), even if Google kills GMail people will start using Inbox as it's just a matter of learning a few essentials:

Also, there is a risk factor of loosing data because it's tough for many to take backup of everything and store it with some another service provider.

In the matter of Gmail or Inbox people will accept the inconvenience as they don't have a better alternative. If at all Google kills GMail which is highly unlikely (because even today we see that 'Loading standard view | Load basic HTML (for slow connections)' message in GMail) people will start using Inbox.

Here's a little History of Email:

INBOX started as an agile project to create a lean mail agent, with time it became a totally different tool with different logic then GMAIL. INBOX logic is that your inbox should always be empty, an it has planty of functionalities that supports that like "snooze" and "done" buttons for example it's also missing some functionalities that gmail has, like attaching large files directly trough google drive: try attaching a 25MB file to a mail and you will get this screen. 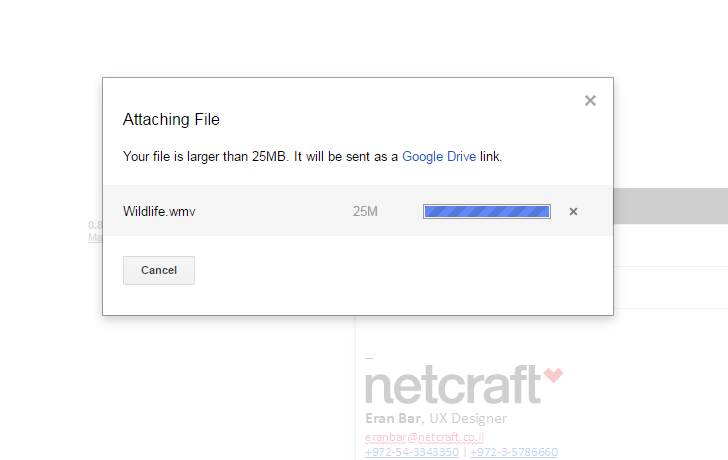 . and thats fine, because its not a high priority feture. so, in conclution, google has 2 mail agents under it's wings that are intended for different types of users and has different concepts and internal logic. I believe that they will co-exist for many ears in the future and it will be interesting to follow thier changes (especially INBOX).

Not the answer you're looking for? Browse other questions tagged usability user-expectation google gmail or ask your own question.

9
Why are different cursors used when hovering over buttons in Gmail?
6
Why does Gmail hide email options under a '+' sign?
8
In terms of UX, what's the best way to introduce new design? Gradually or via beta version?
1
Which social login should I use, Google OAuth2 or Google+?
97
Why is Google using a (new) 2 step Gmail sign in process?
29
What's the rationale behind Google's “no save” approach?
0
Predicting Flaw in users action and giving feedback to user