Why do most microwaves open from the right to the left?

Why do all of the microwaves that are used in our houses opening from the right side to left side? I've never seen any that do the opposite. I called LG company and asked them why and I got an answer in a week by email indicating that the first design that they did was in this structure and style. 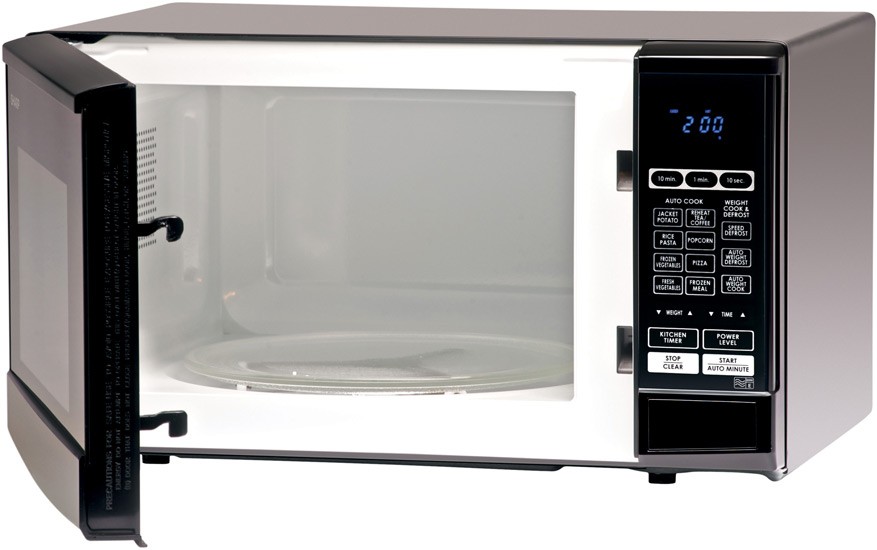 Because the control panel is on the right.

Microwaves have the controls on the right to favour right handed people (similar to the placement of control panels on pre 1990's televisions.)

Placing the hinge on the right would make for a very awkward design as it would be near the middle. If you wanted to stir your food and adjust the controls at the same time, you would find the door bashing into your arm. Having it on the left means it is at one end of the equipment, so when the door is open there is no obstruction for an operator moving between controls and food.

I would guess it is because the design fits better for right-handed people.

According to Wikipedia "Studies suggest that 88–92% of the world population is right-handed".

EDIT: I wanted to point out that on a microwave we are managing hot elements, safety and extra precision is something to consider. Although some elements such as plates could be managed with the left hand for a right-handed person, a cup (for example) is certainly something that needs more skill specially if it contains a hot drink.

I think having a microwave open from the top center (like an oven) would solve the right hand left hand argument.

Other than that argument, the only other reason I can think of - we are trained to move left to right, primarily because that is how we read and write.

If the keypad/touch console of the microwave was on the left, that would indicate that you are required to key in the time/instructions before you open the microwave and place the actual items inside.

As some other person has noted, the majority of old TV sets, even before remotes, have had the control knobs to the right.

It is control which commends design. Microwaves operations demand visual perception plus hand manipulation; 90% of population is right handed; so, in order to not interfere vision and hand operation, right side controls seem logical.

As a left handed person I know the feeling of misfitting in a right handed world, anyway these obstacles it are not -usually- life threatening issues :-)

Not the answer you're looking for? Browse other questions tagged usability user-expectation kitchen or ask your own question.

9
Does it matter if Pagination controls are Left, Centered, or Right-Justified?
3
"more..." What happens then?
54
Why don’t we remove door handles and let doors open both ways (inwards, outwards)?
3
Is there a benefit from driving on one side of the road, while sitting in the other side of the car?
35
Mobile website menu. Should hamburger menu be on left or the right?
11
Why do 4-wheel suitcases usually have their wheels on the short side, rather than the long side?
2
Having a preview next to text editor, should it be on the left or right side?
1
Bilingual Navigation