I run a site where users can submit code to algorithmic programming problems, which is then evaluated for correctness. The site has a commenting system, and the comment area looks something like this: 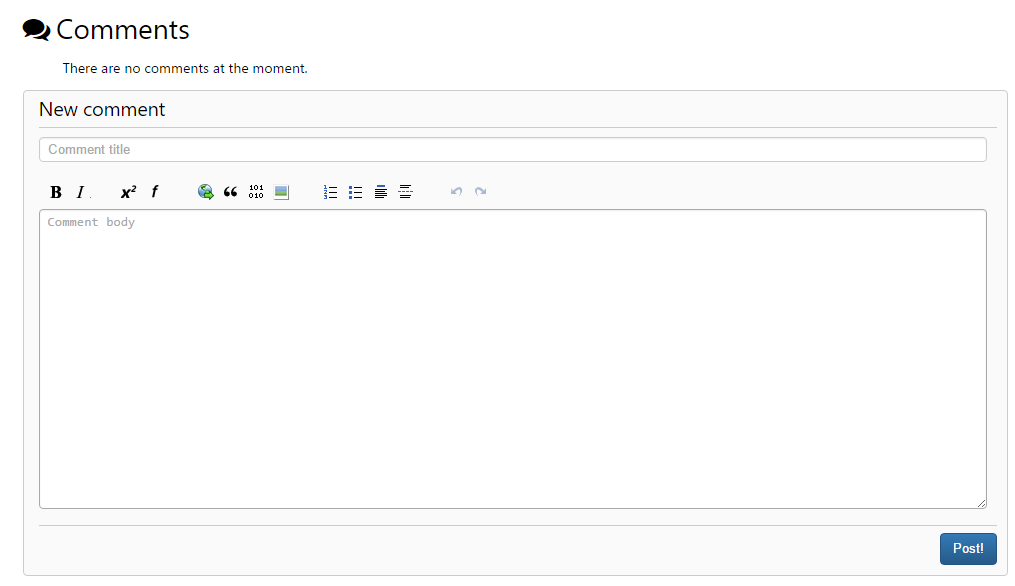 The problem is, users new to the site occasionally (frequently enough to be an issue) post their solutions into the comments, thinking them a way to submit their code. This is not ideal, since it spoils the problem for other users.

I first thought it might be a language barrier for non-English speaking users, but found that most of the code postings were done by users registered from English-speaking countries.

How can I make it more clear that the comment area is for commenting on problems, and not for solving problems? I was hoping the icons and headers (not to mention lack of syntax highlighting in comments) would be a deterrent, but it seems like it hasn't been sufficient.

Since users typically spend a few minutes reading the problem before attempting a solution, there is plenty of time for them to recognize the big blue "Submit solution" button.

How can I help users submit, or at least deter them from doing so in the comments?

the solution submission button is featured prominently on the page

Your users are pretty much telling you that it is not, and what's more, they also seem to be telling you which way they feel more natural interacting with your site.

I think the reason is permanence and flow, a user might scan the page, notice or not the submit solution button, and then read more, if at that point he wants to submit an answer, he probably already forgot where the submit button was and seeing the form conveniently there after finishing reading, might think they act in conjunction. There is also a convention in place...

If you think about it, Stack Exchange has the same sort of problem, their solution is to minimize the call to action for comments and allow people to submit solutions through the form at the bottom of the question.

So, you could recreate this UX or make a new one with what you have, a quick fix might be to make 2 calls to action, one for comments and one for solutions, you can place them below the question and modify their significance with some indicator.

As @Keno comments you can take a look here at Stack Exchange. The way the problem is approached is:

Probably, users are not paying much attention to the text and just "reading" the elements in the page.

The problem might not just be a matter of visibility (as you point out) but a matter of the number of steps to perform an action.

The number of steps for answering should be the same or less than the ones needed to comment (as the main action in this context is answering).

So I think you could either: display both actions under a button, clearly visible and at the same level; or display a text-area for answers and "hide" comments text-area behind a button, so the "less effort" action is answering the question.

I would make it really simple and obvious.

Rather than having the comment section maximized by default, I would have two buttons

And then direct the user to the correct section on the same or different page.

Not the answer you're looking for? Browse other questions tagged forms layout interface comments or ask your own question.

38
Should you place the "add a comment" form above or below the list of comments?
3
Comment section overload?
6
Desktop application problem: how to present a new option without confusing existing users
5
Hierarchical/flat comment system
2
How to show comment at top level, without using a popup?
4
Adding comments to a list of items, is there an elegant solution?
2
Is the comment area of a news story a distraction to the user?
5
How to enhance bilingual - auto suggest search box?
1
Right place to add a new comment on lazy loading screen
0
Share and comment on an article preview