I need to display some hierarchical data in a side menu of an Android app. Sort of a tree, with nodes that can be dragged and dropped around. The entire tree has to be expanded from the start.

I understand this interface is not ideal for mobile devices, especially smartphones. I'd like to know what's the recommended paradigm in Material Design for this scenario.

That's what I want to create. User should be able to change order of Item D and Item E, and at the same time to move Item A below Item B, or to add a new descentand Item I from Item F and so on. When clicking on one of the items a view should be loaded displaying all item informations and metadata. 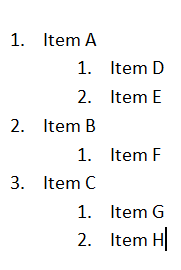 Tree views are not described in the Material Design guidelines. And nested navigation is not allowed on mobile. The way you describe it really makes me question if it would be a good idea to put it in the navigation drawer (side menu).

General mobile behavior is to navigate using drill-down. Meaning that you get a list of one level in the list and by clicking on one of the items takes you one level deeper.

If none of these patterns fit your case you can think about creating your own pattern.

If you access Material design web you can see that the sidebar (navigation drawer) has two levels of hierachy. At first they are not expanded but on click can be expanded and scrolled (on desktop or touch devices). 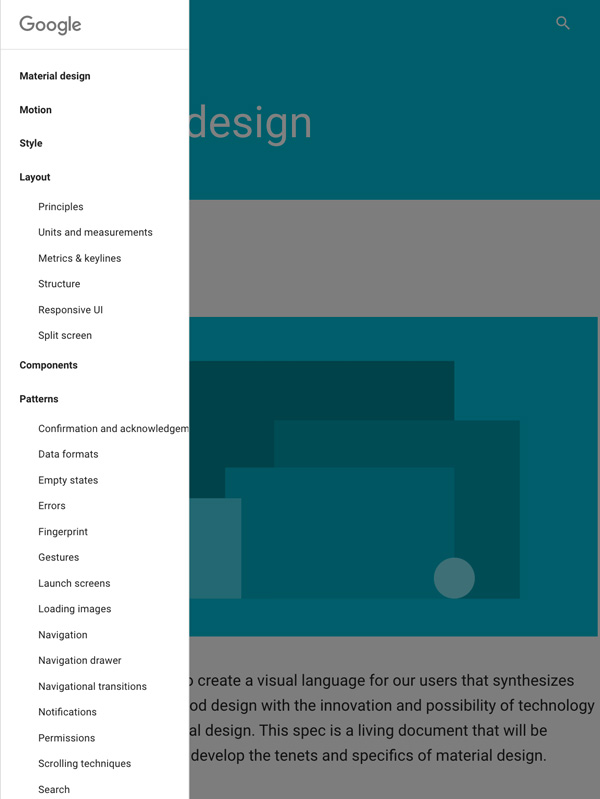 If possible I would avoid introducing another level of hierachy. For example WordPress dashboards menus let you add several levels but it becomes confussing after the second level, even when you are editing it. 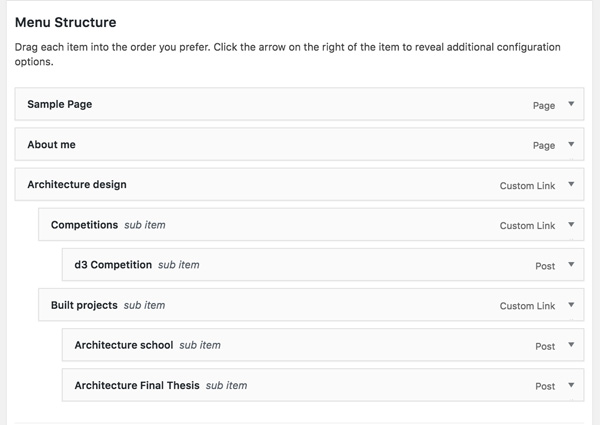 The problem you might be having is how to combine scroll and drag, as on touch devices it is a very similar interaction.

Trying to edit WordPress above example on a tablet is a bit uncorfortable as the whole box of each element makes the element draggable, so to scroll you have to touch outside of the elements.

Instead of making the whole element draggable, I would introduce a small box on the side for the dragging action. This way you avoid dragging when the user wants to scroll (on touch devices).

This is how the WordPress menu elements are dragged on desktop:

Not the answer you're looking for? Browse other questions tagged android menu hierarchy material-design tree or ask your own question.

15
For large hierarchies - checkbox tree or 'guided tree construction'
3
How to present data, part now, part later
2
How best to display top-down decomposition data (hierarchical) with in place-editing and child addition?
1
TriState treeview with checkboxes
5
UX to view and search through large set of hierarchical data
6
Visualizing version-controlled hierarchical data
0
Displaying an item with many characteristics
8
Tree navigation in material design
4
Is it always necessary that an expandable list should have an indication to show that that it is expandable?
2
What's the most appropriate Metaphor for submitting a selected Item in android App?