There is a file manager in my application, which can contain documents, images, audio files etc. What would be the best empty state message for empty folders, empty search results etc? 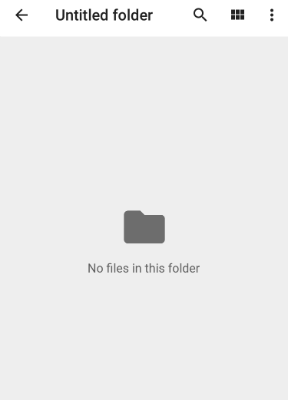 Earlier when I dealt with empty states, I always had the need to be witty about it, but that turned out to be less than effective, as it could annoy the user if they were frustrated with that empty state. While researching how to solve that, I realized that the CTA principle was important, as well as taking the whole UI stack into account.

In your case, an empty folder is usually created to populate it with something. The Empty States blog shows a bunch of different more or less effective empty states, but what they have in common is that they do provide some sort of call to action to eliminate the empty state. I'm unsure of what your app does exactly, but some sort of prompt to select/add files would be useful.

Another thing to consider is the UI stack principle, written about here in a great article by Scott Hurff.

Basically, the blank state is what you're concerned about right now, but theoretically this folder can also be classified as a partial state. As it does not provide any functions existing on its own, the folder needs to be populated, so the ideally user friendly thing to do is to provide some method of doing so easily.

The example of the greyed-out folder looks good (conformant) to me. You could increase its "empty" look by making it a greyed outline instead, if you wanted to.

For the case of the empty search results, presumably you show the results immediately if there are any, so that folder (or a rectangle) with "Search returned no results" would be good.

Not the answer you're looking for? Browse other questions tagged error-message files empty or ask your own question.

6
Getting “empty” views right
2
What is the best approach to disallow an empty search?
2
Should an empty search box return an error message or all results?
0
Are voice messages part of File manager
5
How to deal with files in use?
2
Displaying actions for item lists
8
Categories in a list: Empty state or hide?
1
Best Practise - Should an empty state message have a full stop?
1
Empty comment UI practice
3
Preferential behaviour for displaying empty row states