How to know which model fits best among Fitts', Walford's and Shannon Model for given data

How to identify on the basis of regression graph(R^2) that which model is better among Fitts', Walford's and Shannon Model. We have given a task, which we executed using the tapping application and after calculating the average movement of time(MT), and average distance of cursor from center to target(MD), we calculated the values of Fitts', Walford's and Shannon model. It can be seen in the below table.

Now we have also implemented a graph, which looks like this. 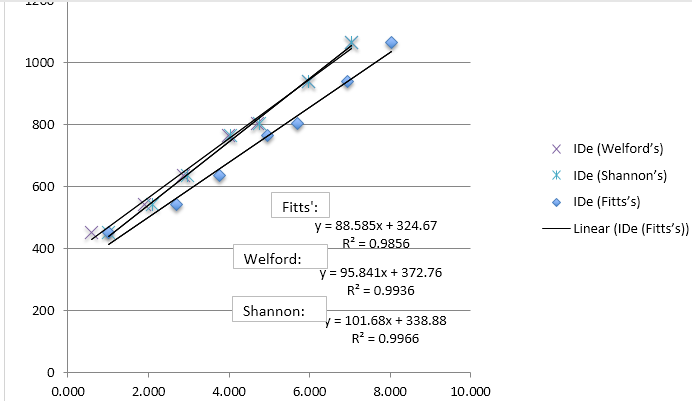 It is unclear what you are looking for when you ask "which model is best". All three models are telling you the same thing.

A particular model may be more predictive for your situation. The way to decide that is to run more studies and compare the results to your regression.

You can't just point to one formulation and say "that's best".

Fitts' model is the original and has been shown to apply under a number of conditions.

The Welford model is a 2-factor variation, which takes target distance and target width as influencers, that can not be directly compared to Fitts' 1-factor equation. You can't plot Fitts' and Welford on the same graph and simply compare the two lines. If you really did calculate width as a seperate influence, looking at your data I'm not sure this was done, Welford's model generally provide greater predictive power.

The Shannon model is another variation. It has arguably become more popular when working in human-computer interaction. At least in part that ISO 9241 recommends its use. So, if you're looking for the "offical" internation standard variation, use Shannon's.

Not the answer you're looking for? Browse other questions tagged gui-design touch-screen human-interface-guideline fittslaw or ask your own question.

2
How best to display top-down decomposition data (hierarchical) with in place-editing and child addition?
3
Best approach for capturing data for items in a listbox
1
Desktop GUI loading slow
5
Heuristics to choose most appropriate chart for given data
2
What is best way to show the select box data which is long(almost one line sentence)
3
In a data table, which shoud be in a column and which should be in a row?
1
Best choice for data with multiple variables?
4
How do I design an admin window for cascading dropdown data?