I have 3 screens which I would like what would be the best method to organize them.

In mobile phone is straightforward, just 3 Activities for each screen would be enough.

But in my case, the Details Fragment include another list. Both of them in phone will use Floating Action Buttons to add more elements to the list. However, I understand that having 2 FAB in the same screen is not a good practice.

Next, I will show a draw of these 3 screens: 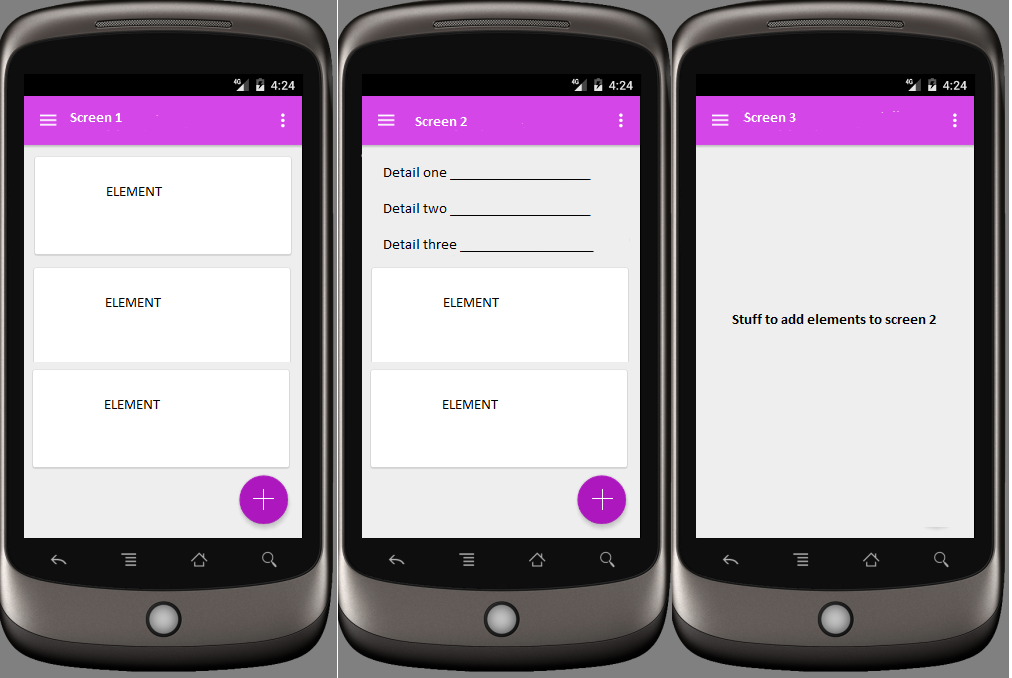 However, I want to do this on tablet: 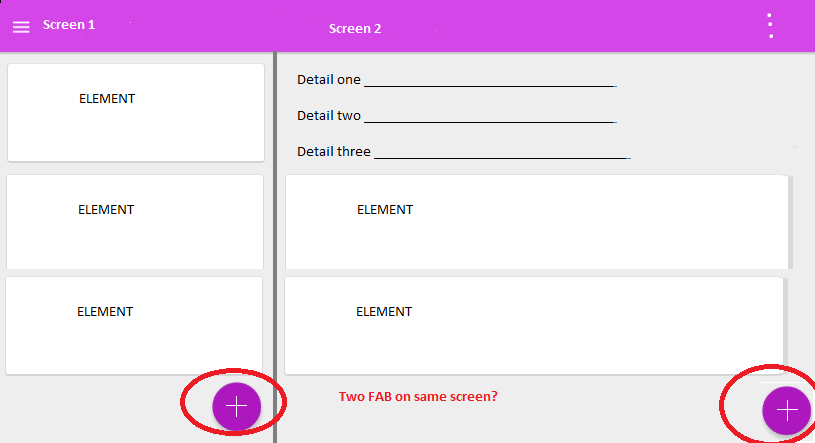 And Screen 3 would be another one apart.

So, after having seen the screens, I want to ask these questions:

As you can see, Screen 1 is the first screen. When I press the FAB, we go to Screen 2. In the header we introduce details of the elements of screen 1, and there is a list of elements.

What kind of content is on Screen 1? A FAB seems not to be the correct pattern to switch to screen 2. Floating Action Buttons are used to manipulate the content on the current screen, not for navigation. FABs may be used to create an item, change a (global, non item specific) status etc.. You should provide us more details and/or rethink the whole navigation concept of this application. Using a FAB for navigation will be confusing for your users.

I think you might have to rethink on the interaction which you are providing here.

I will first explain the use of Floating Action Button.

Here is my understanding from your question.

If my understanding is right, I can suggest you on how to solve your scenario. Use cards. When you click on the card, it can expand and show the fields for the details. This could very well work on tablets too.

Not the answer you're looking for? Browse other questions tagged android tablet listview or ask your own question.

7
Where to put OK/Cancel on an Android activity form?
6
Should you use both the accelerometer and the touchscreen in a phone/tablet based game?
8
Checklist App (Process Documentation) Interface For Android Mobile Tablet & Phone
3
Best way to subtract score on Android when a tap adds score?
6
App design process - Prototype phase: Photoshop design every single screen?
0
Selecting country in a mobile/tablet landscape mode vs portrait mode on a responsive APP
2
Back Navigating with Android Fragments and Navigation Drawer
4
Are multiple FABs allowed in a single-page in android?
1
Landscape vs. Portrait on devices with disabled auto-rotation
0
Progress bar or text label for progress in a list view