Why in the UK are there pedestrian crossings with two sets of indication signals - one above the other?

This has baffled me for a long time: why pedestrian crossings are installed in the UK with two sets of cross / don't cross indicators - one above the other.

On this set I saw recently it's not even consistent: at one end of the crossing there are two indicators - and at the further end there's just one !

Can anyone shed any light on this - is there some obscure accessibility reason for doing this ?

(BTW The 'walking' man lights up green when the traffic stops. Each indicator makes sense from a UX point of view. It's just that there are two of them) 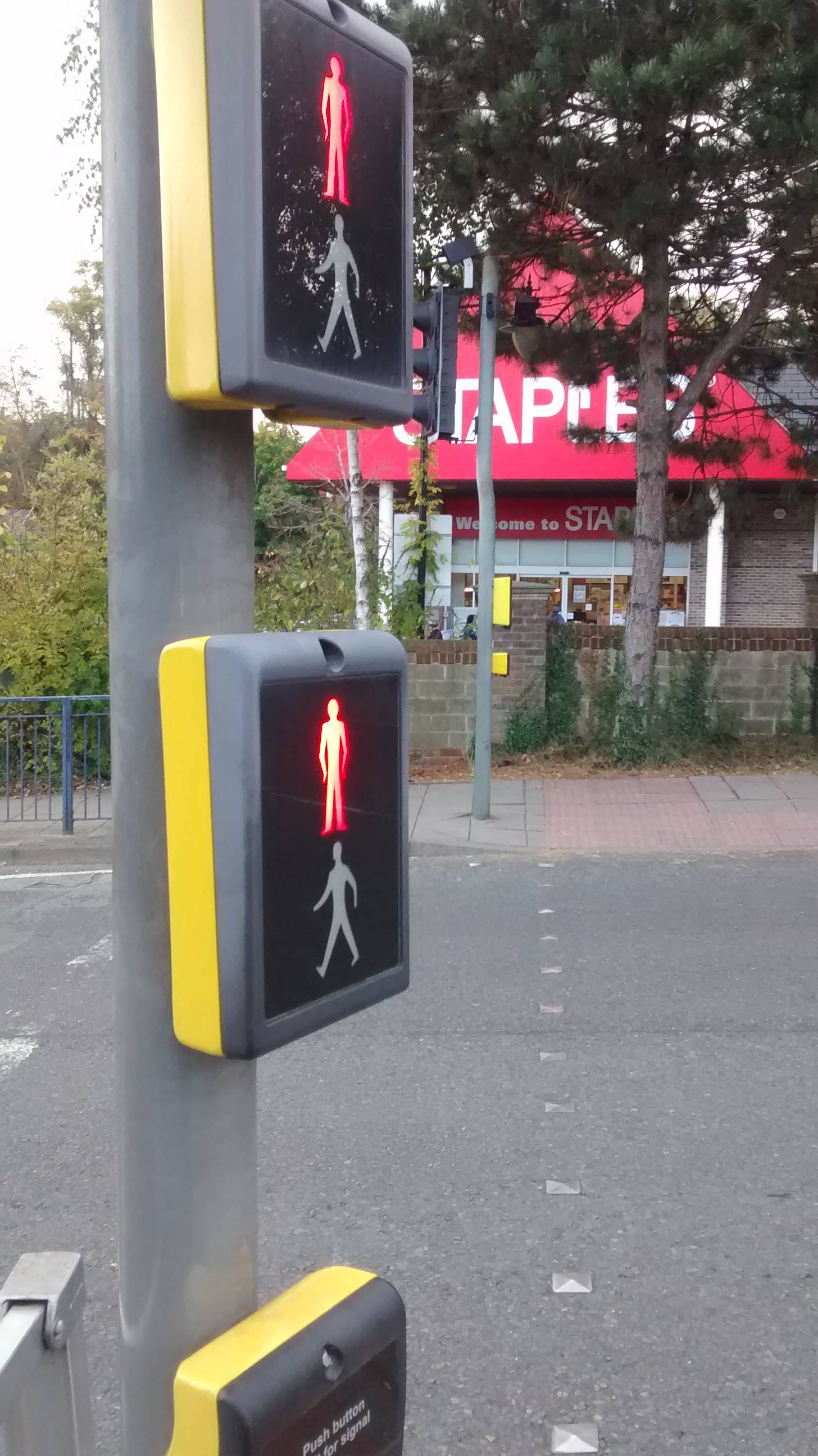 I have found this documented in an official document from 1995 named The Design of Pedestrian Crossings . Specifically (but not limited to) the following items:

5.1.5 Drivers must have a clear view of at least one signal head on approaching, and when stationary at, the stop line. Where the view of the vehicular signals is reduced by the vertical or horizontal alignment of the road or other situations such as masking of signals in heavy traffic conditions or by overhanging trees, the conspicuity should be enhanced. This can be done, for example, by the provision of additional secondary heads, tall posts, building out kerb-lines if the carriageway width is sufficient or installing signals over the carriageway. Such overhead signals should be considered as supplementary to and not replacements for those listed as minimum in the relevant Regulations. If the overhead signal option is to be considered the problems of maintenance should be taken into account.

5.1.7 To assist blind and partially sighted pedestrians, as they approach the crossing, the primary push button/indicator panel should normally be located on the right hand side. The alignment should encourage them to face oncoming vehicles. The centre of the push button should between 1.0 and 1.1 metres above the footway level.

5.1.8 At Toucan crossings it is normal to install a push button unit either side of the crossing place at the height quoted above. Special arrangements may be needed if an equestrian push button is required.

The lower one (as mentioned in another comment) is to allow all users, including handicapped ones, to see and interact with controls at their own accessibility level, while the other is to allow all other users have a clear view. Think of a crowd of pedestrians, then both signals: If you had only the lower one, people at the back and drivers wouldn't see the signal. If you had only the higher one, short people on the back wouldn't see the signal either. Thus, you need both of them

Here's a case that may happen with users with disabilities, handicapped or simply small height (such as children or people with dwarfism conditions). Please note the visual angles (in this example I considered all this people has the widest possible visual angle, around 75 degrees) 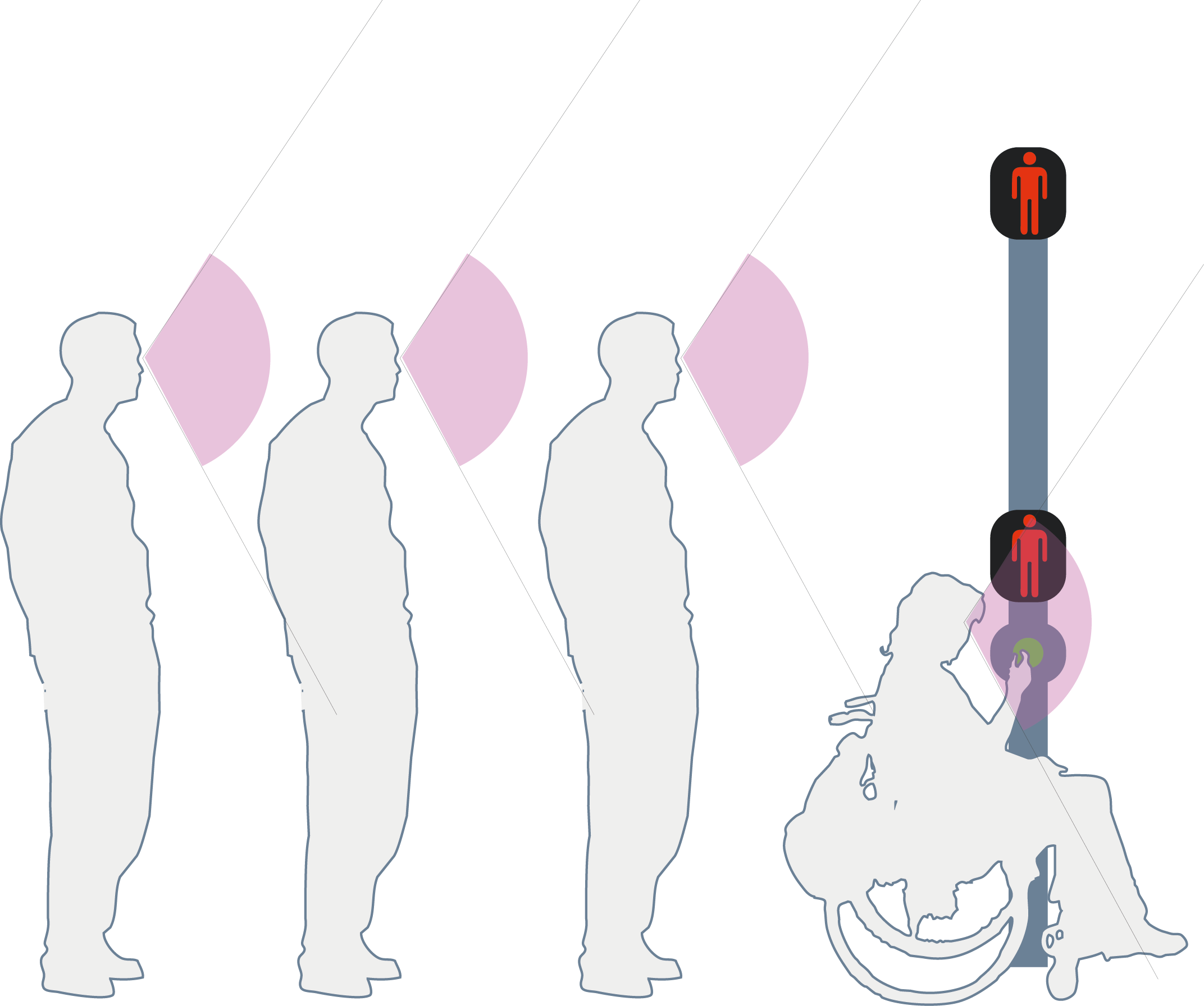 As you can see, it would be very difficult for a person in a wheelchair to see the upper sign. Similarly, second and third person in the row won't see the lower sign

My guess is that the side of the road the picture is taken from, might be busy at certain times and therefore the lower signal not seen.

So an extra higher signal helps people who are farther from the post and might have others standing in front of the lower one.

So my impression is that in order to provide solution to some problems as @Devin indicates, new problems arise and this is a solution to the second ones.

11
Why do Pedestrian Traffic Signals only play the audible crossing notification for only a short duration and not for the entire duration of crossing?
6
Is it better to mirror a real-world system for specialized users?
4
Would a 'Processing' indicator on pedestrian crossing controls be helpful - and if so how would it be designed?
2
public transit bus stop and door buttons
4
Is there a benefit from driving on one side of the road, while sitting in the other side of the car?