Alternative control to drag and drop for assigning tasks to an individual?

My application is being developed in Ext and I see through their demos that users can drag and drop items. This seems like a clunky way to assign accounts to new financial advisers, especially since assignments could easily be made in error (choosing the wrong individual). Users will be able to back out if they made a mistake, but this doesn't seem like the best solution. I once worked on a ticketing system that had this ability to drag and drop additional items onto an open ticket and it became very messy.

Do any other types of patterns come to mind for anyone?

This seems like a requirement for a possible 3 step process where details can be seen permanently and easily checked at each stage - and before final assignment.

step 3: once you are confident you have the right adviser, you click apply in the confirmation area.

As a visual guide to what I mean, see the very quick mock up below. 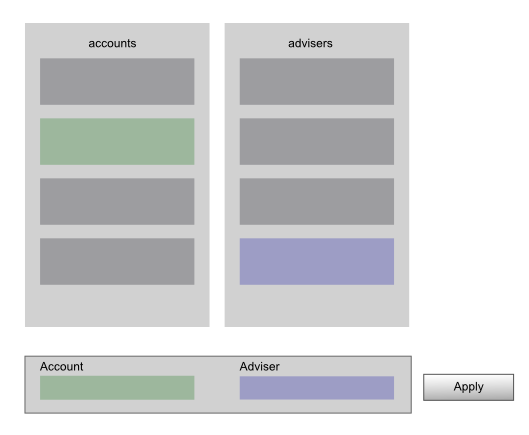 I take from your question that the user might be modifying several account-manager relationships together -- give this account to that manager, but if so we should move this other one from him to this other manager, and so on.

If that's correct, then your interface is fundamentally about relationships. One way to represent relationships is with lines connecting other UI elements.

Consider a UI where accounts and managers are displayed (boxes? icons? you decide), with the display including key information (account value, total managed money for managers). Current relationships can be shown as lines (say, black) connecting these. You can use a different line color (say, red) to highlight the ones that need to be changed. A user can see at a glance that, say, these five red lines indicate changes to be made; when he drags one end of the line to a different node the line changes to some third state (say, blue dashed) to indicate "pending", and the values update with some changed rendering to also indicate the "pending" nature (blue text, boxed, or something like that). The user can move things around as much as he wants, always seeing a snapshot of what things would look like if he kept this. When he's ready, he can commit (button, keystroke, some other gesture of your choosing).

If your system permits customers to request new managers because they don't like their current ones, you should probably keep track of that so a later change doesn't send an account back to an unwanted manager. This means your UI has to handle the case where an assignment is not permitted. (You might have other rejection criteria too, like limits on the amount of money a manager can manage.) A basic way to handle that would be to not permit the drop of the line-end (with some suitable message). A slicker way to do it, if you can spare the computing power, would be, when a line is being moved, to "gray out" invalid targets.

This approach works if you are working with a fairly small number of managers and accounts. (You don't need to show all accounts, only the ones you might change. But you do need to show all available managers.) If you want to work with 500 accounts and 75 managers this approach won't work; you'll either need to narrow the focus somehow (managing fewer at a time) or use a less visual interface (like a per-account drop-down menu to set the manager, which isn't very good for topsight).

Not the answer you're looking for? Browse other questions tagged gui-design controls user-behavior business-application drag-n-drop or ask your own question.

4
Help with UI for Grouping Interface