What are some UI patterns where an option in a multi-select acts like a radio button choice and clears other selections?

Typically, a survey question will ask for someone to select one option or select many. Also, the system would like to clear any choices, if Don’t know is selected.

Prevent any confusion or errors when all other selections are lost after selecting Don’t know. Letting them know what just happened, and helping them recover.

Your gut reaction O1 or O2?

What do you think of O1 and O2? What if the word grouping label repeats the question? The goal here is to show that Don't know is different or to allude to the system behavior. 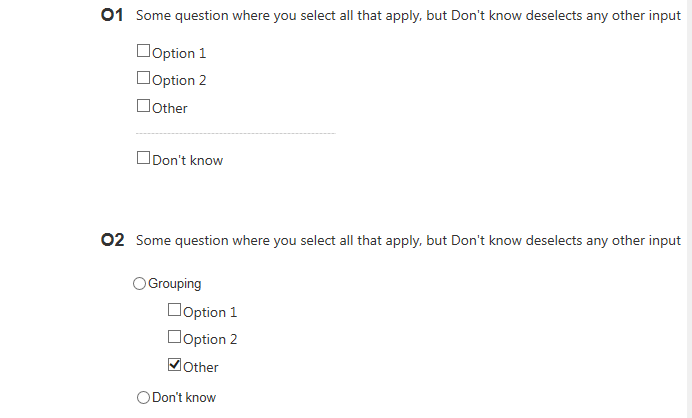 Checkboxes are used when there are lists of options and the user may select any number of choices, including zero, one, or several. In other words, each checkbox is independent of all other checkboxes in the list, so checking one box doesn't uncheck the others.

So, a possible alternative would be to remove the Don't know option from the list and encode no selection as Don't know in the application logic if necessary.

Again, Don't know is not an actual option so you can implement it as a button instead of as a checkbox. This may be the strongest way in which you can signal this special status to the user and also signal that Don't know is equivalent to not making a selection. Much in the same way that a Skip button is commomly used in UIs to allow you to avoid making a choice.

My gut reaction is O1.

With O1, you avoid the issue of what to put in the "Grouping" label, as well as keeping the "Don't know" option on the same plane as the other options for the question. The key here is to visually signify that the "Don't know" option has a different behavior than the rest of the options, which I think you've done by spacing it further down and having it separated by a horizontal line.

In the O2 you highlight the option "I don't know" and I think this shouldn't be your goal.

If in development is covered this functionality, deselect the others checkboxes on click on the last, I think O1 is clear and preferable and the horizontal line is all you need.

If you still think the O1 is not a good idea, you can improve O2 (if you are able to modify the code) and add a switch on top or the radio buttons with that choice and keep the checkboxes in the next sections. For me, this option highlight less "I don't know", even is a separate row, on top.

Not the answer you're looking for? Browse other questions tagged checkboxes multi-selection radio-buttons intuition or ask your own question.

4
Are there standard patterns for vertical radio-button like choices in tables?
11
Moving Elements Between Lists
3
What is the best way to gather optional data using radio button groups and drop-downs?
1
multi select option in iOS app - how to design the multi select button
7
Arrow keys on radio buttons: disable or not?
1
Order of radio button options and default option
4
UX for selecting complex set of nodes from 2-level, dynamic, moderate-size tree?
0
multi select list menu with 'Other' option
33
Is there a good way to communicate choose at least one?
16
Is it okay to use a dropdown chevron in a checkbox?