What are the usability benefits of using multiple monitors?

I've read a lot of articles suggesting that work patterns are more effective when using more than one monitor. But why is that the case, from an HCI perspective?

And as follow-up questions, are there any serious downsides to using multiple monitors, and (presuming they do increase usability overall) is there any upper limit to the number of monitors before usability is impaired?

As you rightfully pointed out there are a lot of articles which mention the increase in productivity levels. To quote this Computer Services Auckland Blog - Pulse IT Blog

A University of Utah and ATI Technologies survey of 108 university & non university personnel using Dual Screen monitors reported increases of productivity with 33% fewer errors, 16% faster edits, 6% quicker access to tasks, as well as usability benefits of 45% easier task tracking, 32% faster performance and 24% more comfortable to use than single monitor set ups. Production of work was of a better quality, performed faster and with fewer errors. Task focus of the user along with their speed and ease of learning were also increased.

A survey undertaken for Apple on its larger high definition 30in Cinema screen in comparison to using smaller monitors also offered statistics boasting at least a 45% increase in productivity across the board. This was then disputed as inhumanly possible by one productivity expert who stated that a 5% increase was a more likely figure for larger screen use and around a 30% increase in productivity potential for Dual Monitor use. Although it’s advantageous to having more space to work, it will help some more than others depending on what they are working on. Larger screens could also have positive health benefits for workers such as less eye squinting.

On a scale of 1-10, Wichita study participants ranked dual monitors as more useful than single screens 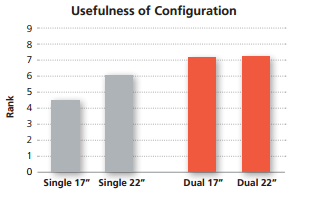 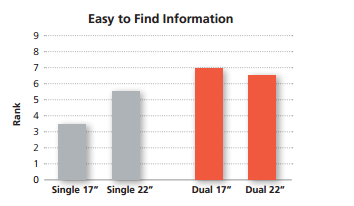 We did observe several usability issues for both display size conditions. For the small display, there were many problems observed in terms of managing the level of complexity on the small screen, including losing files by accidentally closing them, wasting time resizing for each stage of a task, moving windows so that they weren't occluding key information, etc. From our windows event monitoring software, we observed that users on the small display wasted time bringing windows back to the front when occluded, resizing and repositioning them. In addition, small display users spent extra time accidentally opening and closing documents they did not intend to because the taskbar aggregated window items by application (i.e., all open web pages would collapse to one tile on the taskbar, with a numeric indicator of how many items were being represented by that tile). In all, users performed over 300 more window “focus” events (i.e., bringing the window to the top of the z-order for input) on the small display than they did on the large display.

For the large display, brightness of the display was mentioned as an issue by several users. Also, some users thought that they were forced to sit "too close" to the display, and they wanted to be able to back up and interact with it from a distance. In terms of windows design for the very large display, users mentioned the amount of navigation required and the problem of losing the cursor on the display were the two most onerous problems.

With regards to using dual or multiple monitors,this article provides some useful inputs on usability issues

In Tog’s article on Fitts’ Law, he describes how he experimented with “multiple desktops” (though at the time, it may have seemed more arbitrary than that). With a second monitor on top of the first, and a menu that users could “bypass” into the top monitor, it actually slowed the user down quite considerably: at first, the menu was missed quite often until the user slowed way down to get at the menu.

When using multiple monitors in a horizontal direction (a typical layout) the right edge of the left screen and the left edge of the right screen become very hard to hit. This especially becomes a problem with programs that are maximized. Consider the example of a typical scrollbar (normally on the right hand side) on a maximized application on one of the two monitors. On the left-side monitor, it becomes a hard target as the user has to directly aim and slow down to hit it. If on the right-side monitor, the scroll bar essentially becomes infinitely large and can be hit without any trouble at all.

Using multiple monitors also completely eradicates two of the five easiest locations to reach: two corners are no longer easily “reachable” – or perhaps reachable at all. This easy reachability of the corner is perhaps one reason that programs put the window control buttons in the top right corner; with another monitor on the right the corner becomes that much harder to hit. If there is a monitor above, then it becomes just that much harder.

As good as two monitors is, three monitors is even better. With three monitors, there's a "center" to focus on. And 50% more display area. While there's certainly a point of diminishing returns for additional monitors, I think three is the sweet spot. Even Edward Tufte, in the class I recently attended, explicitly mentioned multiple monitors

One big advantage for software developers is that you can have your application running one one screen and your development environment running on the other. This means that there are hardly any issues when you have to switch your attention from one to the other. Having both things visible at a reasonable size at the same time makes it much easier and more efficient to test and debug the application. It's particularly noticeable when you are trying to debug an application that is constantly redrawing the screen.

While this is purely anecdotal, it has been backed up by several years of mine and my colleagues at different companies experience.

I would expect that this effect would benefit other users where there are two or more concurrent applications running.

The results aren't exactly blinding, but even the 9% make the cost/benefit ratio stellar.
(It would be interesting to see if the improvements descline after a while, though).

I couldn't find something on the limits, so here ar some personal observations:

2 is easy to set up, for most computers it's just "plug in a second one".
3 side by side seems to be a sweet spot, simply due to regarding required eye / head movement. Much of the benefit seems to be desktop real estate, but adding monitors scales much better than upsizing monitors. In addition, multiple monitors currently better afford arranging multiple windows via maximize on desktop. Mouse travel range works against number of monitors.

I recently started using more than one monitor, and I got couple of observations:

As for downsides - what I noticed - is that:

In overall, I'm very satisfied, but multiple monitors work differently for everyone. My girlfriend never turns on the second one, while my friend just uses one to work, and second one to watch funny sites. Oh well ;) You need to try it yourself anyway, but i think that for anyone above level of "email & word at work" it's almost a must-have.

It can greatly improve the productivity by preventing lots of window changing.

Below I give some examples:

These are just examples.

However, from a financial point of view: if you get only 2% more effective and your hour wage is like $50, a monitor of $200 returns in 200 hours, which is just 5 weeks of working.

Adobe Systems has been putting significant effort into allowing its Creative Suite of products to be used with only one monitor. The effort has been touted in new feature press and interestingly their workspace optimization has been focussed on single monitor use. There are some examples cited below.

Anyone who has been accidentally tripped up CS UI's elaborate minimization buttons can see that its been a priority. I would question it - as dual or even triple monitors has proven to be the norm amongst professionals.

Dual monitors allow you to have an unimpaired view of the User's Experience. The only downside I see is that if the monitors are too large - there is a natural momentum to push the size envelope. Many UI professionals have one small monitor - 17 inches to keep them in what is increasingly a smaller space in terms of real estate, considering the growth of mobile and tablet devices.

Not the answer you're looking for? Browse other questions tagged physical hci screen-real-estate multiple-screens or ask your own question.

489
Why do people clear the screen multiple times when using a calculator?
8
What are the benefits of non-QWERTY keyboards?
10
Multiple Monitors and screen corners
2
Tracking what users are drawing on a piece of paper in real time
1
Using a survey to identify problems, for usability testing
1
What are all the interaction mechanics for text input boxes?
10
What research exists into the user experience of physical smartwatch designs?
9
Why are monitors landscape and books portrait oriented?